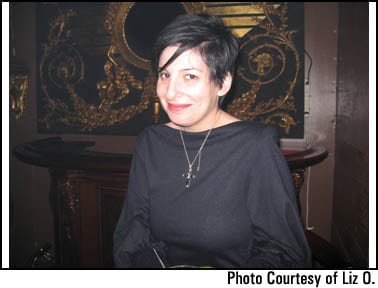 Liz: Liz, you were born and raised in L.A., so can you describe the atmosphere of the city for those of us who have never been there?

Lauren: It’s not easy to describe L.A. because it is such a big city and a lot of places that are perceived by the world at large to be part of L.A. (Malibu, Beverly Hills, Santa Monica) are actually separate cities. I’m from the San Fernando Valley, which actually is Los Angeles, although a lot of people think that it isn’t, and that itself is huge and diverse.L.A. is kind of like a big jigsaw puzzle, each neighborhood is unique, but everything fits together cohesively.

Lauren: In such a huge city, how do you find your place? Have you carved out a niche for yourself?

Liz: Well, I grew up here, so finding my place was more or less natural. A lot of my friends are people that I’ve known since I was fifteen and we kept at least some of the same common interests over the years. I don’t know if I really have a niche, though. I’m pretty open-minded and like to think that my friends cross all of the imaginary sub-cultural and socio-economical barriers that exist here.

Lauren: Do you feel like you’re leading a kind of double life by doing freelance writing about nightclubs and about pop culture, and then also contributing to an entirely different subculture by writing for Razorcake?

Liz: Not at all.Ultimately, it’s all part of the same thing. I typically don’t cover mainstream stuff. Even the most famous people I’ve interviewed aren’t household names. My introduction to the club scene was through goth nights, and even though I’ve branched out a lot since then, that sort of underground sensibility greatly informs both the subjects I cover and my style of writing.

Lauren: How much does the music you listen to impact your identity?

Liz: To be honest, very little new music impacts my identity. What I heard between my childhood and college years, though, has had a profound effect on my life. It’s influenced what I choose to cover as a writer, probably even how I write in terms of creating a rhythm or structuring a story.

Lauren: When you started writing your Razorcake column, “Guerilla My Dreams,” did you feel like you had something to prove and have you done that yet?

Liz: I didn’t have much professional writing experience before Razorcake, so, at the very least, I had to prove to myself that I could write well. In some ways, I think I have accomplished the initial mission, but I still haven’t written the perfect story. That, however, might be for the best as I don’t want to be like the band that follows a perfect album with twenty years of worthless output.

Lauren: A few issues back, you wrote a column about former presidential candidate Ron Paul and his supporters. Do you consider yourself to be very politically aware? What social and political issues are closest to your heart and do you write about them very often?

Liz: I’m politically aware, but I actually hate discussing politics. I feel like political discussions are pointless as people generally go into the conversation with an opinion and are rarely inclined to rethink an issue or, at the very least, empathize with someone of a different persuasion. Ultimately, the only results are a) agreeing on the issue or b) insulting each other. And, since I openly dislike just about everyone in Washington (and Sacramento and L.A. City Council), I try to avoid such moments. As far as issues go, I don’t think I have a pet cause, but I do take a keen interest in media issues. I think that policies regarding media conglomeration, the FCC, copyright, etc. are some of the most important issues facing us today, as the media we ingest ultimately affects our opinions as voters. These are also some of the most overlooked issues. However, outside of my graduate thesis, I haven’t had much of an opportunity to write about these views. Maybe I’m not ready for it yet.

Lauren: Do you ever get writer’s block when you’re trying to write your Razorcake column? How do you get the creativity flowing?

Liz: I get writer’s block all the time, for all my work. In fact, I have writer’s block right now, which is why I answered the questions so quickly. There’s no cure, it’s a matter of letting it pass.

Lauren: Tell me your favorite: place to DJ:

Lauren: Person to get drunk with:
Liz: Carlos, my boyfriend.

Lauren: Excuse for staying up all night:
Liz: A good party.