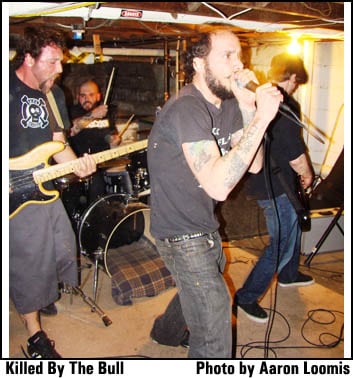 Interview with Killed By The Bull: By Joe Allocco

At the tender age of thirty-four, Justin Fullam has settled down in New Jersey’s MorrisCounty, started a family, and secured himself a good, old-fashioned desk job. He’s also the manic preacher at the helm of Killed By The Bull, a slow-boiling punk band finally starting to turn heads after spending some time under the radar. Justin’s Biafra-shouted lyrics are, by turns, introspective and accusatory. His stage presence, supported by a solid rhythm section and schizophrenic twangy-yet-driving guitar sound, is unabashed and totally fucking crazy. Five years and a few cast changes behind them, Killed By The Bull has settled into a solid lineup and released their newest record and first full length Failing Is Fun on Koi Records. Here, among other things, Justin talks about what’s behind their new album, helping out with rising independent punk zine Define the Meaning, and what new horror movies he’s been watching.

Killed By The Bull is Justin Fullam, Cherch, Jeff Stevens, and Paul Klein.