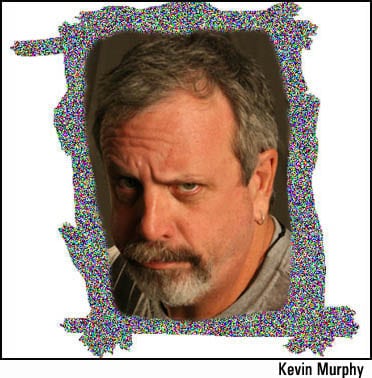 Interview With Kevin Murphy of Mystery Science Theater 3000 By Chrispepus

Kevin Murphy is best known for his work on Mystery Science Theater 3000, the TV show about a man sent into space by mad scientists and forced to watch terrible films. In each episode, the unwilling astronaut and two robot friends sat in front of a movie screen and ridiculed that week’s cinematic disaster. Among those who have seen Mystery Science Theater 3000, about 99% became fanatics of the show. (The other 1% are mostly television executives.) Murphy worked as a writer on MST3K throughout its 1988-99 run on television, which included stints on a local Minneapolis station and two cable networks. From 1990 until the show ended, he was the puppeteer for Tom Servo, a small, relatively immobile robot but a hero to wiseasses everywhere.
In this interview, Murphy talks about Mystery Science Theater and his recent projects with former MST3K colleagues Bill Corbett and Mike Nelson. He also tells stories from his time working as a bouncer at a punk club in 1979-80. Other topics include his book A Year at the Movies and his current writing project, Why Hollywood Sucks. I laughed a lot during our conversation. It’s always fun when Murphy applies his sharp wit to bad cinema, but he’s just as entertaining when talking about good films and movie venues.

Chris: You wrote that you once worked at Merlyn’s, a punk club in Madison, Wisconsin. When did you work there?
Kevin: Oh, man, let me tell you. That was such a wonderful time. That was ’79 and ’80, the winter and spring. And, boy, wasn’t that a time, as the old folks say.
Chris: Which bands did you see and which did you like best?
Kevin: It was this combination of the new wave people with the thin ties and the pointy shoes and that sort of thing, and then the American punk scene was starting to come on—bands like Black Flag and the L.A. punk scene. Some of my favorites were the Stranglers, who were wonderful fun. Killing Joke was fantastic. The Stranglers were the only band that genuinely scared me when they were on stage, because they started with all the lights off and they started playing “Waltz in Black” and going right into “Just like Nothing on Earth.” They were really loud and they had no lights on in the whole club and people were starting to get a little disturbed. When the HB strutters were backing away from the stage, you knew that they had something going on.
As the legend goes, that night at Merlyn’s, when the kids really started getting into it and one of them spat on the bass player, well, he kicked the kid in the face and sent him to the hospital. That really kept ’em back. They were saying, “We can out-punk you fuckers any day of the week.” I got to see U2 on their first American leg. Gang of Four was a blast: we stayed up and they drank white russians and amaretto and coke and played pool. They were a really fun band to see. XTC played there, the Pretenders, James Chance from James Chance and the Contortions. I actually got to see him pass out. I was a bouncer at the time. I went back into the dressing room and saw him shooting up. He came out and played two songs and fell down on the stage and that was the end of the show. It was a tiny club: I think the capacity was about 235 and we routinely went over that by about 100 people.
Chris: In that era, you had the origins of slam  dancing and stage diving. Did you see any of that while you were there?
Kevin: Well, yeah. It came to Madison under the guise of the “Huntington Beach strut.” That’s what they called it. It was all that stuff. It was the under-age kids who just wanted to get some aggression out, work it out on the dance floor. There was some stage diving going on there. The hardest thing was being a bouncer for something like that because there were a few people who just didn’t want to be rushed on the stage. The Rezillos actually left the stage because it became a spit-fest. That was a little nasty. Joan Jett could take care of herself—nobody fucked with Joan Jett on stage—and Siouxsie Sioux was the same way. The women were never any problem. The boys would just beat the hell out of each other and go out of the club bloody and happy and smiling. I just remembered, one of my favorite shows I saw there was X when they were in their heyday. They were so tight and they sounded so great.
Chris: You worked on the crew of a 1987 film called Blood Hook, directed by (Mystery Science Theater 3000 producer) Jim Mallon. That must have been interesting.
Kevin: Well, it was originally entitled Muskie Madness, which was far more of a midwestern title. They sold the film to Troma, and the guys at Troma said, “Nobody’s going to know what a muskie is outside of Wisconsin. Are you kidding me?” So they changed the name to Blood Hook. (The title) had “blood” in it and that was enough for the guys at Troma. It was the most fun I ever had at summer camp, about six weeks up in the north woods of Wisconsin, shooting this movie. It was the story of a crazed bait shop owner who would grind up unwitting victims and feed them to his minnows so he could raise bait to catch the prize-winning muskie in the muskie tournament.
Chris: So it was kind of like a twist on Motel Hell?
Kevin: It was a teens-on-a-spree movie. You know, they go up to this cabin and they start disappearing one by one. They find ’em on a stringer underneath one of the docks—all these bloated heads. The effects were really very cheesy and we nearly killed ourselves several times. It was an inexperienced crew and we were running high-voltage lighting over the water. I’m really surprised no one died. All the sets were built with chainsaws and screw-guns.
Chris: Well, that’s true to the form.
Kevin: Absolutely.
Chris: You covered a lot of different types of movies on MST3K, horror and sci-fi obviously, but also everything from biker flicks to Cold War dramas. Which genre of film did you most enjoy skewering? 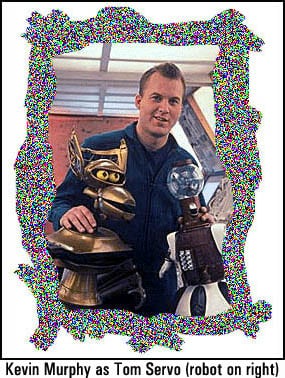