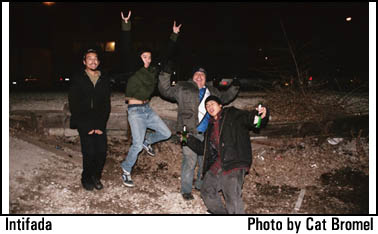 Interview with Intifada: By Alexander Billet

The word “Intifada” has become damn-near ubiquitous over the past several years. Loosely translated, it’s Arabic for “uprising.” Since the beginning of the second Palestinian mass rebellion in 2000, it has re-entered the English lexicon as a slogan for all kinds of resistance. So, it’s not really surprising that four guys from Chicago’s thriving hardcore scene would take it up as a name for their band (a quick search online will reveal that they’re not the only ones who’ve taken the moniker). It’s a fitting word for their music: defiant, frenetic, unpredictable, and sure to put a frown on the face of anyone who adheres to the least bit of tradition.

But when I sat down with drummer Alberto, guitarist Joey, bass player Oak, and vocalist Noe, they made clear that the band’s name isn’t just vague propaganda. One of the more recent additions to the WindyCity’s diverse array of punk bands, they were more than happy to delve into all sorts of deeper ideas regarding their origins, their attempts to overcome divisions within punk, and the relationship between the personal and political in their music.

Billet: How did the band get together?
Noe: High school. We met each other individually and we started introducing each other to one another.
Alberto: I first met Noe when I skipped my band class in high school. I was chilling with my friend Manny, and he ran in a circle with this cat (Noe), so he introduced me. I knew Oak from just seeing him wear a punk jacket…
Oak: I was the most punk to begin with. I was like the punk punk with the mohawk and the jacket, and all that shit…
Alberto: Yeah, so I knew Oak and he introduced me to Joey…
Noe: We just started hanging out…
Oak: Yeah, and me and Joey had this Screeching Weasel kind of band called the Hendersons. And then me and Noe had this street punk band called The Defiled. And then these guys, everybody else but me, started Intifada with two other different bassists, and they were trying to get some shit started. They all kind of knew me, and their original bassist couldn’t make it to the first three shows, so they asked me to play in his place, and I just ended up being part of Intifada.
Billet: So you usurped him. [laughter] When was all this? It was ’05, right?
Noe: Yes.
Oak: Summer of ’05.
Billet: We were talking earlier about how your sound has evolved a lot since then…
Noe: Yeah, it’s developed so much, and we’ve gone through so many phases. Our first stuff, I think we can all agree, was definitely a bit more original, and then with everything else we took a lot of influence from the stuff we were listening to.
Oak: It was weird because these guys were playing, like, fast… really fast hardcore before we even started listening to really fast hardcore, and then we tried to play that. And then—I don’t know, dude—our new stuff is all over the place and crazy. It’s just some crazy shit! Every fucking band and every genre I’ve listened to is mixed up in my mind, I’ve formulated this sound ,and it’s coming out in our new stuff.
Joey:Imagine this, okay? Punk rock, hardcore, in the lotus position… [laughter]
Billet: Oddly enough, that seems about right. Now, hardcore has kind of this undeserved stereotype, especially from outside the scene, as being an angry white kids thing…
Oak: Ha!
Noe: It’s true, though. It’s true, because it’s in the ‘80s that it blew up and it was all the white kids—except for Bad Brains. But it was all the white kids and then, I don’t know, some time around Los Crudos (recognized as one of the first Latino punk bands in Chicago) that shit just flipped around.
Alberto: Yeah, that was one of my biggest influences was that during the ‘90s, Crudos was setting up stuff in the hood because they weren’t getting invited to North Side shows and stuff like that. So, you had the whole DIY Latino explosion right here.
Noe: Actually, we’re all North Siders.
Alberto: Yeah, we’re all North Siders. Everbody thinks we’re from South Side (which is predominantly Black and Latino). But there’s Latinos in the North Side too. I’m from AlbanyPark. All the Guatemalans live there, so…
Billet: That actually leads me to the next question. Where are all you guys originally from?
Oak: Born and raised Chicago, straight up. My parents are from Thailand so I’m Thai by descent. But straight up, live in the same house I was born in.
Alberto: I was born in uptown Chicago, and lived here all my life. My parents are of Guatemalan descent, both of them.
Noe: Yeah, I’m the only one with a story. [laughter] I was born in Mexico. I came here when I was about seven years old.
Billet: What part of Mexico?
Noe:Guadalajara. I was born there. I came here. I went through all the legal bullshit, and I was lucky enough to get all my papers and all that stuff. About three years ago I became a legal citizen, and I’ve been living in HumboldtPark for about thirteen years now.
Joey: I was born in Kenya. [Lots of laughter because he obviously wasn’t.] No, I was born in Chicago. I don’t even know where I was born. I think I was born somewhere in the South Side.
Billet: Now, Chicago is a bit of a unique city because it has a Latino punk scene that is a scene unto itself but still relates to the broader hardcore scene. And you guys, I’m assuming, see yourself as part of that.
Alberto: Well, we definitely started off as part of the South Side label—Southkore, that’s run by Benny from No Slogan—and that’s actually because Noe’s brother played bass for No Slogan. So, I guess that’s how he got introduced: Noe seeing Southkore shows. You know, it was a spot for Latino bands to play because Chicago’s really segregated as far as a city—always is, always was, probably will be always. It’s always that you’ve got your anarcho-punk kids on the South Side, your straight edge kids, your Latino scene scattered everywhere. 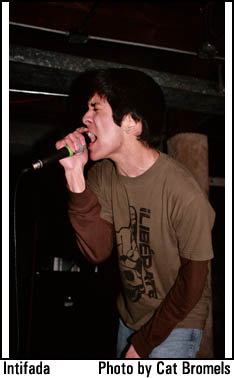