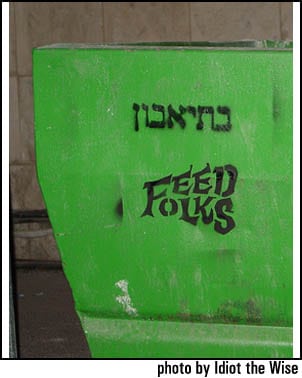 Interview With Idiot the Wise: Inspire By Mrz

To you, oh, apathetic first-world country residents and two-faced politicians. To you, political and anarchist punks, activists, and artists. For all the political talk you do, and all the know-how you have, could you give up everything to move yourself to the Middle East in order to help peace along without having to resort to joining the military and “spreading democracy” with guns designed to spill blood? Honestly, at this point in my life, I don't think I could.

But an artist who often goes by the name of Idiot the Wise has not only done this, he currently lives in Jerusalem and is fighting the good fight we all simply talk about. I became acquainted with him on the photo storage/sharing website, Flickr.com, where he posts pictures and images of his life and art.

I really enjoy seeing the pictures of his anti-globalization and anti-war messages show up on the walls and streets of Jerusalem. These images were in stark contrast to the views all Israeli citizens are said to have in mainstream media, and it intrigued me. His art questions society as a whole and while many of his contemporaries are “singing to the choir” per se, he is spreading his ideas freedom fighter-style, dispersing messages of peace right on the battleground.

The reaction to his work has been hard to gauge, as most of it is seen by locals, and, of course, street art is not legal in Israel, but other works, such as his contributions to the Face2Face project, have gained international press coverage. (The purpose of the Face2Face project is to take portraits of Palestinians and Israelis and to post them, face-to-face, in huge formats in unavoidable places on the Israeli and the Palestinian sides of the land, in essence to show that both sides have the same faces with the same fears and hopes as the other: http://www.face2faceproject.com/) As far as how long his art remains on the walls of Jerusalem, that is also hard to determine. Again, not only is it illegal to use public walls and streets for art, with the threat of tearing down, painting over, sand-blasting, and power washing it away always prevalent, but there are many environmental conditions that play into the life of his art. The biggest factor is sun. There is simply so much sunshine in Israel that even during the winter months the piece, unless properly sealed from the elements, quickly begins to fade or deteriorate to nothingness.

This interview was conducted in order to understand his motives and goals, his accomplishments and failures, and his inspirations and current goings-on. Maybe in the process, some of us will be inspired by this clever fool to walk the walk instead of just talk the talk.

Mr. Z: Where in the U.S. did you grow up?
Idiot the Wise: I’ll answer this question pretty simply. I was born in the prison – country – of the United States... I feel like two cities were responsible for my environments up until sixteen: Chicago and St. Louis, the south-sides of both. 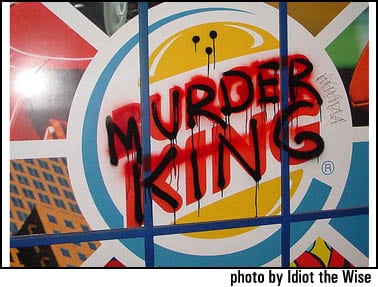 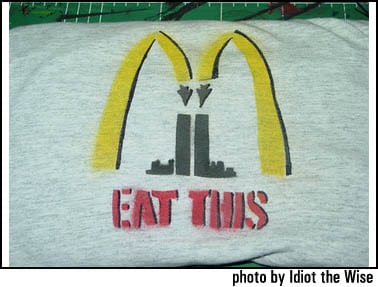 Mr. Z: Explain your McDonalds/World Trade Center shirt design for the readers and tell us the positive and negative comments you have been given about it.
Idiot the Wise: Okay, so I have gotten so much shit for this shirt and an equal amount of folks who love it. For those who haven’t seen the shirt, it depicts the McDonald’s logo arches as being the jet streams of two planes flying into the center of the arches which are stenciled to be the twin towers. The slogan says “Eat This” So, I guess I have been called anti-American and anti this or that… like, “Why aren’t you a patriot?” I am an

anarchist/romantic at heart but we aren’t talking about all that. It’s simply a stencil and some spray paint on a shirt. I see it as a challenge, as a view into the consequences of corporate and state power mergers. A society may deserve the kind of vandalism it gets, but not the kind terrorism they get from those who run their countries (prisons). This was kind of the thought process.
Mr. Z: How do we bring about peace in the Middle East?
Idiot the Wise: Ha! You really want me to repeat something everyone knows the answer to, yet they never will get rid of the root problem? So, like Robert Marley said, until the day that the color of a man’s skin is of no more significance than the color of his eyes, their will always be war and a rule of international morality will be but a dream to be pursued but never attained. It’s not all about race, but it is always war in Babylon. The exodus from this mentality is both spiritual and physical. Can you live like you mean it?