I caught Holding On To Sound in the summer of 2008 when they played with Underground Railroad To Candyland, Killer Dreamer, and Vlad And The Impalers in San Pedro for the release show of a DVD comp the bands were featured on and was blown away. Months later, I was sent an invite to attend the release show for their second album, Songs of Freedom, but was unable to make the trek from L.A. to Vegas. So, I got a hold of the album and was mesmerized by their latest effort.

At this stage in punk history, it is extremely difficult to scream, “Fuck you, authority!” in a song without sounding inane. But, by the time you get eight tracks into Songs of Freedom, with the song “Bogus,” you have been so incited by the band’s intelligent and poignant rage, that these words are infused with an undeniable renewed power. And as singer/guitarist Bennett Mains repeats the verse in unwavering and rhythmic confidence, you simply cannot help but scream along. From first to final track, Bennett, bassist Zabi Naqshband, and drummer Vanessa Tidwell, bind you dangerously in tense throngs of punk chords and cinematic images of war, oppression, and scorched earth. They then, unexpectedly, release you with sudden swings into playful ska beats paired with lyrics of love, longing, freedom, and personal growth…only to bind you again a measure later. This fluid dichotomy is what makes Songs of Freedom a timely album of both unforgiving discontentment and a loud and driving vision of hope.

I caught up with the band at the Indiepit launch party in Los Angeles where they again traded sets with URTC and Vlad And The Impalers, and they helped me get to the bottom of some burning questions.

Chris: So, you probably get sick of hearing this question, but how’d you come up with the name?
Bennett: Yeah, this guy we knew made it up…
Chris: Someone not in the band?
Zabi: HOTS used to mean something else back in the day. It wasn’t as…
Chris: Cool?
Zabi: ‑As cool as it might be currently, yeah. Someone just walked into the backyard one day and just said it out loud and it kinda made sense to call the band that.
Chris: Said what? “Holding onto sound”?
Zabi: Well, what it used to stand for…Hand Over That Sausage.
Chris: Oh! [Laughter] The truth comes out!
Zabi: Yeah, but then we changed it to Holding On To Sound.
Chris: You think that was a better move?
Zabi: Yeah, we’re doing it for the kids!
Chris: Even though you guys are a three piece, your recordings sound so full. Was HOTS always a three piece?
Vanessa: No. [Laughter]
Bennett: What’s up with these questions, man? No. We kicked out a guy. [Laughter]
Chris: Ah, so you’re a bunch of jerks then?
Vanessa: Yeah.
Bennett: Yeah, we’re jerks.
Zabi: Hey, shut up man!
Bennett: Sorry, man.
Zabi: But that was before the name change.
Chris: So, “Holding On To Sound” has just been you three?
Bennett: Yeah, for a while.
Vanessa: Like, five years while.
Chris: If you had to pin your sound down, what kind of music do you guys play?
Zabi: Punk.
Vanessa: Rock.
Bennett: Raggae…ish.
Vanessa: Raggae music. [laughs]
Zabi: It’s too hard. Too much of everything goes into what we play, but if anything, punk I say.
Chris: Tell us a little bit about your experience recording with Ben Kirsten for your second album, including the trek to get up to Seattle from Las Vegas.
Vanessa:Oregon!..Was awesome. [Laughter]
Bennett: It was far!
Zabi: Twenty-two hour drive!
Bennett: We drove in shifts.
Zabi: Dodging deer.
Chris: Who had the most shifts?
All: Zabi. [Laughter]
Bennett: Ben’s cool. He was real nice.
Vanessa: He let us record how we wanted to record, basically.
Zabi: Yeah, he just let us do our thing even though he has such a big name in the independent recording arena. He let us make our album instead of telling us what to do.
Chris: Do you think he was a lot of help as far as how it came out?
Bennett: Oh yeah. A lot.
Zabi: He has a lot of experience recording bands, and he made things real easy for us.
Chris: What was it like hanging out in Seattle? How long were you guys there for?
Zabi: A little over two weeks. It only rained the very first day and the very last day. There are lots and lots of hills and lots of walking. Lots of coffee places. Great record stores!
Vanessa: The fish market!
Zabi: The donut guy was probably the best. Best donuts ever.
Chris: And he was at the fish market?
Zabi: Near the fish market, downtown. What was it called?
Bennett: Pike’s Market. They take care of their hobos out there too. Pretty cool. 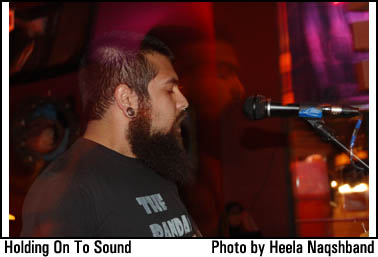