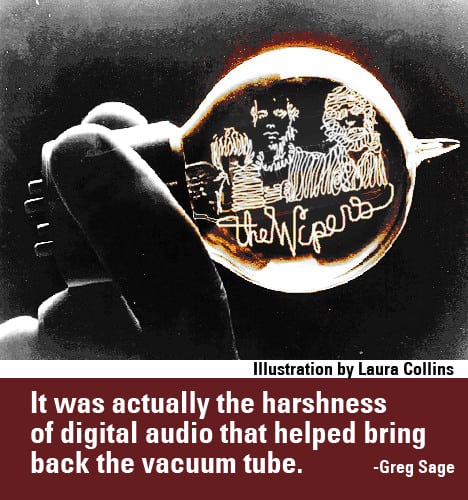 Do you enjoy interviews exclusive to Razorcake.org? Razorcake is the first and only official non-profit DIY punk rock fanzine in America primarily dedicated to supporting independent music culture. Please help keep us rolling along and consider making a tax-deductible donation to us. If you are reading this before December 31st, 2013, check out our year-end incentives!

Hello and welcome to the first installment of Foggy Notion. Here, we will reach out and engage in conversations with our often unsung heroes of recorded music: the audio engineer. I thought that it would be fitting to kick this off by talking to the punk godfather of DIY recording: Greg Sage of the Wipers.

The Wipers formed in Portland, Oregon in 1977, and aside from its own cult following, are most notably cemented into music history by Nirvana, who not only covered the Wipers, but took some very clear clues from Sage’s distorted, often unconventional arrangements. It’s not exactly irony, but it is at least interesting to learn that Sage self-recorded much of the Wipers’ catalog, building his own studio gear to make albums such as Youth of America and Over the Edge—albums that would only achieve a sliver of the commercial success of the bands he inspired. Sage’s vision is an essential link in the evolution of weird, fucked-up, outsider rock music, and his DIY approach to recording and producing music continues to set an example for us all.

I interviewed Greg via email in October, 2013, and he served me with a reminder that recording music is not all that complicated.

Christopher: When it comes to recording and producing music, do you consider yourself to be a ritualist? Do you feel a certain way when you are about to begin a project?

Greg Sage: No, not really. Every project I have worked on was different in many ways, so approaching it was always a new learning process.

Christopher: DIY recording vs. traditional for-hire studio: do you feel strongly about any advantages that one method has over the other? Many more bands are getting their hands in the engineering process these days—perhaps more than when you started recording the Wipers…

Greg Sage: The biggest advantage to DIY recording is, again, the learning process. Learning the recording process is always beneficial in the long run for any musician. It is almost a necessity nowadays, since there are fewer record labels giving artists large enough advances to cover for-hire studio costs.

Christopher: You are credited as producer for the 1985 Beat Happening self-titled album. As producer, what kinds of things do you think you contributed to that album?

Greg Sage: From memory, I think I only helped them with a song or two, recording-wise, in an old fire station building.

Christopher: Do you prefer to capture a “live” sound or do you like to use the studio to create this “other” kind of sound?

Greg Sage: Mostly, I have worked with live sound as far as working with bands. I have never got into using too many tricks that much. I always went after the raw sound approach.If I was working with electronic music, like “electro,” it would be a totally different type of technique than what I have done in the past, as far as the recording process goes.

Christopher: What equipment have you found to be the most interesting to use on recordings? Is there certain gear that you use for every session?

Greg Sage: I have always been very keen on vacuum tubes for recordings since before 1978, even long before it became vogue again in the ‘90s. It was actually the harshness of digital audio that helped bring back the vacuum tube. I taught myself electronics at a young age and have built much of the equipment I use. I built enough tube mic preamp channels to record a whole drum set years ago. I have designed and built my own Bass DIs (direct in), distortion boxes, compressors, and mic preamps—all with vacuum tubes.

Christopher: Do you ever utilize mobile-based recording apps—on an iPad or iPhone, for example?

Greg Sage: No, I am too old school.

Christopher: In 2000 (in a Tape Op interview) you mentioned how the music industry was in bad shape. People keep insisting that it’s way worse now. In terms of outsider music, are we in a post-industry period of making records?

Greg Sage: It looks like we are far into a post-industry for record making. It seems even large stars of the past are going more independent from the major industry. The digital age has changed everything so fast.

Christopher: Is there ever really an industry for the DIY scene?

Greg Sage: The internet is about the only thing left for the DIY community to use with much success.

Christopher: What are you currently tracking to? Have you built your own console?

Greg Sage: I have an old Trident console that I modified a lot. I still have an analog 16 track and 24 track digital.

Christopher: Your guitars always sound really great—you’ve mentioned before that your sound has a lot to do with your own tube pre-amps. Aside from that, what kinds of mic’ing techniques do you go with? Anything out of the ordinary— Not only for guitar but for any part of a recording?

Greg Sage: Nothing out of the ordinary as far as mic’ing, I always move things around “on and off axis,” (the relationship of the microphone to the center of the speaker) depending on what the source is.

Christopher: Can you give us an update about what you’ve been up to this year?

Greg Sage: The last few years I mostly have been re-mastering the Wipers catalog for vinyl re-issues and revamping the artwork for Jackpot Records and Zeno Records.

You can check out the music of The Wipers and Greg Sage at the Zenorecords website.