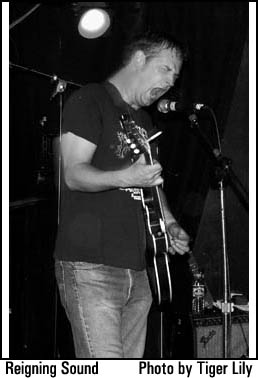 Interview with Greg Cartwright and Ryan Leach: Talking About Gene: Cut from an interview featured in Razorcake #43, available 4/01/08. By Ryan

A seminal artist deserves dissection. Curious to the point of obsession with our interests we need to find out how our favorite musicians and writers went from novice to formidable talent. With someone like Jean Genet—an orphan who received no “formal education” after the age of twelve—tracing the roots of one of France’s greatest writers is tough, especially considering Genet’s obstinacy. In the case of Henry Miller it’s easy—The Books In My Life lays out what Miller was reading at various points in his life and how each respective scribe influenced him. And of course there are all kinds of shades in between Genet and Miller—those open about their influences depending on the mood, circumstance, decade, etc.

One of my favorite living musicians is Greg Cartwright. Like Wire’s early records, Cartwright’s work effortlessly pummels me. And the greatest part: He’s still going strong. The best may be yet to come! In a long interview undertaken for an upcoming issue of Razorcake, Greg and I went on a Gene Clark tangent. I knew Clark (of the Byrds, Dillard and Clark, solo artist) was one of Cartwright’s favorite songwriters. There’s the literal: Greg covered Gene’s “Here Without You” on an early Reigning Sound single. Then there’s the slightly harder to discern: Cartwright’s personal songwriting is strongly reminiscent of Gene’s—a hallmark found in each musician’s best work. I hope you enjoy the excerpt!

Ryan: I recently read a great biography on Gene Clark called Mr. Tambourine Man. It’s by this Canadian rock journalist named John Einarson. Have you read it?
Greg: I haven’t read it, but a lot of people have recommended it to me and I do intend to read it.
Ryan: It’s really amazing. It says in the book that there was a power play going on in the group while they (Doug Dillard and Gene Clark) were recording that second (Dillard and Clark) album. Girlfriends became involved in the recording process—vying for singing time—and Gene kind of lost interest about halfway through.
Greg: That’s too bad because his stuff on there is really pretty killer. “Don’t Let Me Down”—that version of the Beatles’s song is on there and that’s fantastic. It takes the track to a whole different place. And “Through the Morning, Through the Night”…there are a couple of other ones on that album that are really unbelievable. Then there was the album that came out first in Holland and years later in America—Roadmaster. That one’s kind of hard to find.
Ryan: Yeah, I don’t have that one. That’s the one with him in a red coupe on the cover.
Greg: Yeah. You’d love it; it’s so incredible. It’s all classic Gene stuff that sounds just like you want it to sound. I love the way Gene writes songs in general. And he’s one of those guys, as well, where some of the stuff is really autobiographical, but, at the same time, some of it is super abstract. The Gosdin Brothers album has a lot of songs that are so abstract they border on a kind of Bob Dylan-style of lyric writing. But Gene’s not aping Dylan; it’s just Clark doing his own thing, which a lot of people apparently didn’t appreciate at the time.
Ryan: No, they certainly didn’t. That record (Gosdin Brothers) was released the same week as the Byrds’s Younger than Yesterday. And Columbia said, “Well, The Byrds are tried and true while this guy is unknown. Let’s sink our money in his old band, and maybe throw him some scraps.”
Greg: That was a big mistake because if you just look at the singles, Gene’s material is the best.
Ryan: Damn straight!
Greg: They are way better than anything anyone else that the Byrds wrote. Once he was gone, it was a steady decline downhill for them. The album with Gram (Parsons) is kind of fun–Sweetheart of the Rodeo–but it’s mainly covers. There’s nothing on there that’s mind blowing, just pretty good. They never had another songwriter like Gene. To me, Gene was the Byrds. There were two things that defined the Byrds as far as the early singles go: Gene Clark’s voice and songwriting and McGuinn’s guitar. And if I had to make a choice between a good songwriter and singer and a kitsch guitar sound, I’d have to go with the voice.
Ryan: That’s true. Chris Hillman lives right around where I used to live—VenturaCounty. I used to work at a radio station and he would come in. One of the things I read in an interview with him—he said that, “People always come up to me and say ‘Gram Parsons.’ I always say ‘Gene Clark.’”
Greg: [laughs] You know what’s funny is that on Gene’s album—and on all the other albums he did, even up to Roadmaster and the Dillard & Clark albums—Gene had more Byrds on his records than the Byrds did on theirs. You’ve got Michael Clarke, Chris Hillman—everybody except the assholes (Roger McGuinn, David Crosby) is on Gene’s albums. You’ve got this other band masquerading as the Byrds, but it’s just the assholes who nobody else can get along with.
Ryan: There’s that one song on Turn, Turn, Turn—“Wait and See.” That song was released as a single because Crosby and McGuinn wanted songwriting credit—also known as money. It’s a fucking embarrassment. It’s literally one of the most pathetic songs I’ve ever heard from any group. That took the place of a Clark original.
Greg: Oh yeah, it’s really terrible. It was a power play of Crosby and McGuinn saying, “This is our band.” But it’s unfortunate that they got rid of Gene. And it’s unfortunate that Gene never got his dues ever.
Ryan: He was kind of a self-destructive guy. I think the major saving grace of the latter-day Byrds—a surprise even—was Chris Hillman’s development as a songwriter. He turned out to be amazing. “Time Between” is one of the greatest songs ever written.
Greg: That’s a great song. Chris had his moments as well and he had really good taste. He did all kinds of really interesting projects before and after the Byrds.