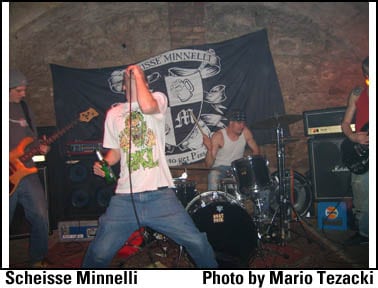 “Don’t drink the viper” is stolen from Street Trash, yeah, but so is the sick opening track of the second record from Scheisse Minnelli out of South Germany (Frankfurt am Main / Aschaffenburg). That entire record The Crime Has Come is one of the best new records coming out of Germany from an old school skate band, so if you have a special place in your heart for Nardcore, RKL and skatecore, stay tuned.

What makes the band totally unique for the European scene is the American slang of U.S.-native singer Sam. It comes out more cool than the usual German / European hardcore band trying to sing in English. And what makes Scheisse Minnelli interesting for all English-speaking people is the fact that they’re four convicted dudes who push their music into a new RKL meets Infest stratosphere, while maintaining a party and drinking attitude without being one of the those fun punk bands. Yes, Sam rambles about street boozing, skateboarding, drugs, crime, and nights in Tijuana but they always have a certain level of aggression on their records and—especially at the live shows—a good and unique mixture of a band which has its very serious sides and also lighter aspects. Well, just like life in general, right?!

Scheisse Minnelli (which means something like Fuck Liza Minnelli) started in 2003 as a project of two ex-Bay Area fugitives who came to Europe to make music. Those two Americans formed the band with Dash on bass and Dudel on drums—two residents of the tiny Bavarian city of Aschaffenburg. Their first gig was the “tear everything down” party from Sam’s old apartment. He stayed in Germany while his friend got homesick and returned to California. Scheisse Minnelli continuously toured Germany, made it to the U.K., Spain, Italy, Netherlands, Belgium, Eastern Europe, and toured twice in the U.S.A. All that live playing made them better and better.

After their debut LP Exist to get Piss’t, which features one of their greatest hits “Skateboard the Freeway,” the Berlin-based producer Archie Alert from Destiny Tour booking asked the band if they wanted to record their next LP with him. Again, the band could enlarge their touring schedule—playing support for bands which Destiny Tourbooking represents—and they are one of the best new bands I heard (and enjoyed live) in Germany and Europe for quite a few years. Only Sniffing Glue from the Rhineland area can maybe touch Scheisse Minnelli, so I thought that Razorcake readers might want to check out what goes on in Germany from an American perspective...

Jan: The Scheisse Minnelli experience continues, even if you now have your third guitar player. The first was your American friend from the Bay Area. Are there any recordings with him?
Sam: Actually, there is a demo that we put out with him on guitar. It was called the “Umbringen”(killing) demo. It was recorded with one mic in a practice room, but it got us our first shows, which included a show with Poison Idea in Belgium.
Jan: Then came Felix who played on the first two full lengths—Exist to Get Piss’t and The Crime Has Come— and all the singles. He also did a lot of touring with you. I’ve heard something of a fight inside the band on tour a while ago?
Sam: Well, Felix was a big part of the band for a long time. He was great the first couple of years. He liked to party hard and play hard and he usually was able to keep it together even when he was really fucked up on all kinds of different stuff. The fight that happened in the Stuttgart area (South Germany) was fucked up. Felix had been up for three or four days on speed and who knows what else. After the show, we hit a bar and thought it was too expensive so we stole a bottle of Jack from the bar and went back to the club where we were supposed to crash.
A conversation starts about a bar that our friend was building in our home town. We were all helping, some more that others. Dash mentioned something and said “we” were doing this or that for the bar and Felix jumps on him and says, “What do you mean ‘we’? You have not done shit”! They get into an argument and at one point Felix says, “I wasn’t the one born with a golden spoon in my mouth,” which is total bullshit. Dash works for everything he has and, in actuality, Felix was the one working for his dad and taking advantage of that situation.
Things escalated and it almost went to blows, but I was able to calm them down. But that was just one problem we had with him. He got us banned from three different clubs with his big mouth. He also got kicked out of the U.S.A. and we had to do the second U.S. tour as a three piece. I basically had to learn how to play and sing at the same time in one day. Then we had to cancel some shows ‘cause of him that were important to us. It just all started to get really old.
The final straw with Felix was a fight he and I had in Aschaffenburg. He was mouthing off at some kids. They were like seventeen or something, and he used a racial slur. This all happened in front of the bar we always go to and we got into a shoving match. He actually quit and I told him thanks for making that easy for me. That happened in March 2009. At this moment Felix is sitting in prison for things he did not associated with the band. We hope he starts to figure out that sometimes he is at fault, ‘cause when we were in the band together, nothing was ever his fault.
Jan: With your new guitarist, Alex, I have the feeling that the band has developed into a much tighter unit. He plays smoother so that you can actually hear how good Dash is on bass, how fast but tight Dudel is on drums, and how good you actually sing. Felix played total death metal destruction on every other song with his guitar…
Sam: Yeah, Felix had a different style. I liked it, though. He was also a good songwriter, but I am happier with Alex now. Not only can he play great, he is a much more relaxed person. He likes to party but keeps it together and does not flip out. His style is, in a way, like Felix’s on guitar but also different. He knows where to do a lot and where to let the other parts of the band take over.
Jan: All of you in the band like to drink and smoke and the major part of your songs deal with drinking (“Street Boozing”), fucking things up, and skateboarding the old-school way (“Skateboard the Freeway“). You toured the U.S.A. twice (West Coast, East Coast, Southwest to Texas), just completed a two-week German tour including the Netherlands and the Czech Republic, and everyone wants to party with you. How do you stay in control?
Sam: Well, we don’t a lot of the time. We try to keep each other in check as much as possible, but the party train seems to take over sometimes. We all indulge, but we have also all been at this so long that we know where to stop… most of the time. I would say that other than the drama with Felix, most of the shit that happens is a result of drinking and then blacking out. On the last tour I had to drink so much because of an injury I had. I, basically, had to drink the pain away so I could put on a good show and because of that I blacked out four times on the tour… maybe five. And, yeah, we are known as a party band, so we get to town and people always wanna party with us. I feel bad if we let them down. So if everyone is beat up from the night before, I am usually the person that ends up partying with the people… but most of the time we all pull it off. 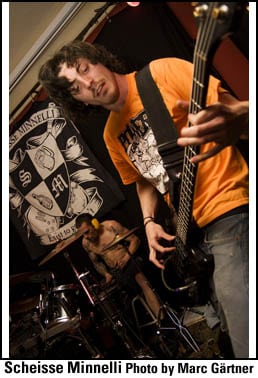