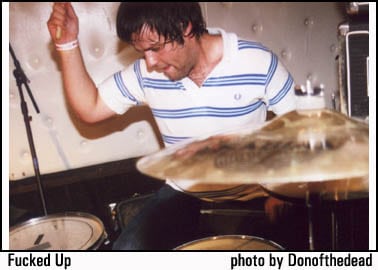 Interview with Fucked Up: With an Introduction By Daryl Gussin By Todd Taylor

A few months ago I was able to see Fucked Up for the first time. I had spent countless hours listening to them in recorded, predictable formats via CDs and records. But now I was going to be able to witness the cannonball of fury and hate that I had fallen so deeply in love with. I had no idea what it would look like executed in front of me but I was positive it would melt my brain. Luckily, for my own good, I walked away from their set with my brain still in a solid state and a love for this band stronger than ever. Fucked Up are angry, intelligent, and catchy as hell. It’s hard to find those three characteristics in a band, and even harder to find a band that can pull it off as flawlessly as Fucked Up.

Todd: What does the word Toronto mean?
Mike: It’s a Native word for where the trees grow or something.
Todd: Wrong.
Mike: Fuck!
Jonah: It is a Native word, isn’t it? Like “land on the lake?”
Todd: It’s Huron for “meeting place.”
Mike: There actually is a place called the Meeting Place in Toronto that’s a Native hangout. What else do you know about Toronto? Try and school us again.
Todd: What does Toronto have the highest per capita of in North America?
Damian: Bike thefts.
Todd: Maybe, but that’s not what I was getting at. It’s a leisure activity.
Damian: Rollerblading?
Todd: Golf courses.
All: Really?
Jonah: I figured southern California would have us beat on most golf courses.
Todd: Megan Pants found those facts.
Mike: Thanks a lot. Make us look like fucking idiots.
Todd: Everyone has to answer this question. What’s your motive for being in the band and how is it different from other people in the band?
Jonah: First of all, the motive is somewhat self-serving because the band is so successful for a punk band. The fact that we’re out here being a testament to that, and all the records. Anyway, the main motive for me is to play music that is really enjoyable. We all work on songs together occasionally, but just the fact that the band is so separated all the time, we each have our own take on it. For me, it’s just inward, selfish pleasure in playing instruments and playing music. 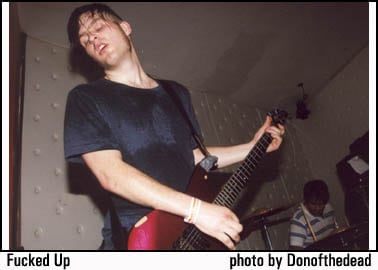 Mike: My motive is to take a fairly successful and enjoyable band and turn it into a band that makes seventeen-minute songs that everybody gets really bummed out on and we can never play live because nobody wants to play them except me.
Damian: My motive is preventing Mike from completing his motive. No, I guess my motive is for records. I’m not going to lie, I like getting test presses, I like getting vinyl. And to advance my solo project, Pinkeye, which Jonah and I have started. Kind of like a Power Station of bands.
Todd: Damian, how does one come to own a seven-foot-high Playmobile man?
Damian: One summer, I worked at a toy store, a candy store, and a different video store than the one that I work at now. I know those jobs seem like the ideal jobs but they were probably the worst. A lot of the songs on the demo are about that. I just took that home one day. It was in the basement and I said, “Fuck it, I’m taking it home from the toy store.” I had two but I lost the other one, I don’t know what happened to it.
Mike: I think we threw it out.
Todd: Are they hard plastic?
Damian: Yeah, but they’re hollow.
Todd: Because someone was holding it over their head in a photo.
Mike: That was actually our friend who looks like a Playmobile man.
Damian: We bought him in Germany. I had amazing toys because I would steal from that store ridiculously, but that was just because I hated it so much. I’d be like, “Fuck, I need to own crayons.” I still have an insane Star Wars Lego collection.
Todd: Mike, did you do both of the zines Quick and Breakout?
Mike: Yes, and Josh did Quick with me as well.
Todd: What was the focus of the zines?
Mike: Quick was ridiculous, it was like anarchist theory and edible weeds. Breakout was about hardcore bands. That came three years later. 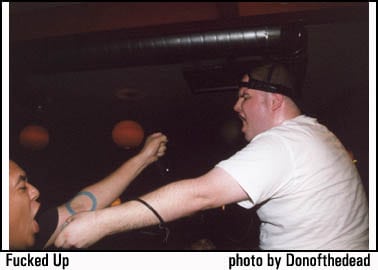 Todd: In Breakout, you did the history of Dangerhouse, too, is that correct?
Mike: I just ripped that from Break My Face (www.breakmyface.com). What was that guy’s name? Ryan Richardson.
Damian: But then you did that thing where you talked about your favorite Dangerhouse records. That was a time when we were living together, and I guess that’s where my love of archiving hardcore records came from. Mike was so meticulous. He would take books out of the library and study these old zines.
Mike: My school library has a lot of punk books, so a lot of Breakout came right out of the library.
Damian: I have a lot of fines there and can’t go back. They had old Australian punk books and Germs songbooks.
Todd: What band do you think that’s existing right now that’s probably not well known but is probably going to be shaping music for the next generation?
Damian: Like bands that are obscure and then there’s going to be an impact? Probably something we don’t even know about. It would probably be something like UK garage. Let’s hope not.
Mike: Something that’s going to make music better or make it worse?
Todd: Hopefully better.
Mike: Just a band that will have an impact?
Todd: Yeah, like when the Pixies were around, they were interesting and people liked them and everything, but now they’re getting more and more popular and people are attributing more and more things to the Pixies.
Mike: Fischer Spooner.
Damian: Grade from Toronto. When they were around, I thought they were abysmal, no one’s going to like that. But now you hear the Used on the radio and it’s like Grade has inherited the earth. Knowing that, it’s probably going to be some band like RAMBO or Good Clean Fun that I can’t stand. Actually, I think it would probably be Atari Teenage Riot or something from that scene that incorporated electronics.
Mike: KLF. That’s my answer.
Damian: Mike, they were huge. They won a Grammy, for Christ’s sake.
Mike: Does everybody in this car know who KLF is?
Todd: I don’t.
Mike: Okay, good. That’s my answer.
Damian: My answer is Haymaker.