Interview with Fly: Portrait Of The Artist As A Fly: by Anastasia Friscia

“Well, that’s a loaded question!” This is how Fly responds when I ask if she’d ever wanted to give up the squatter lifestyle. But I wasn’t trying to stir up conflict; I was genuinely curious if this woman who’d been involved in the intersection of punk rock and art for so long had ever doubted herself. Let me back up a bit…

When I meet Fly outside of her East Village apartment building, she’s wearing a T-shirt and shorts, both black, and sandals. She has a Chelsea, so there are bangs and hair framing her face, but the rest of her head is shaved. The piercings on either side of her mouth look like steel dimples. As we’re walking up the stairs to her apartment, I ask if this is a squat. “Not anymore. We got a deal with the city, but it was a squat when I moved in,” she tells me. 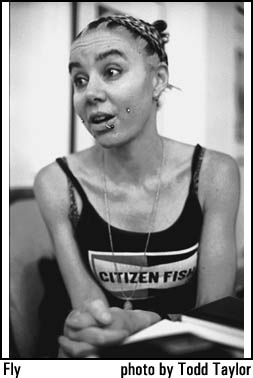 The inside of the apartment is messy, but only because it’s full of drawings, art supplies, and books—so many books she says she’d die if she ever had to move. She works at St. Mark’s Bookshop, which has a poster for one of her books, Peops, on the wall behind their information desk.

She turns off the radio, which was tuned to NPR, and we’re ready to start the interview. But before getting to any of my prepared questions, I have to ask about her necklace. It’s the hood ornament of a Cadillac, and I mention I’ve seen the same thing on L.E.S. Jewels—a homeless crusty living in Tompkins Square Park, who was interviewed by the New York Times last year after his near-fatal heroin overdose. I’m swiftly corrected. “No, I think Jewels has a Mercedes. This is from one of my kids.” Her “kids” are several younger punks she spends time with, and she got the ornament as a gift for baking cookies.

Fly can do a lot more than bake cookies. She played bass and did vocals in God Is My Co-Pilot for several years with Craig Flanagin and is working on her own band called Zero Content. She says she’s been drawing “ever since I can remember,” and does illustrations for Slug and Lettuce, Maximumrocknroll, and Spread, a magazine for sex workers. She also does comics for Peter Kuper and Seth Tobocman’s World War 3 Illustrated. She describes World War 3, started in 1980, as a “response to Reagan-era bullshit,” and says Tobocman was the one who first encouraged her to do comics: “He said, ‘You like writing, you like drawing, why don’t you combine them?’” She’s had two books published: CHRON!IC!RIOTS!PA!SM!, and Peops. 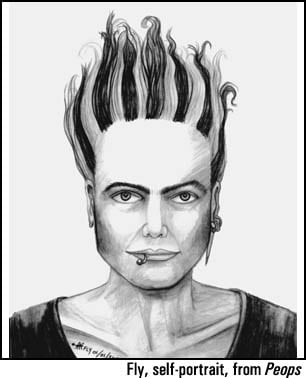 Peops is subtitled “Portraits and Stories of People,” and that’s exactly what it is: sketched portraits of the subjects in the center of the page, with their stories written in the white space around them. She says, “On tour with God Is My Co-Pilot I got the idea for Peops. We were constantly in new places. We toured Europe, Japan… I spent a lot of time with my sketchbook between unloading, soundcheck, hanging out with people, and writing down conversations. Then the project developed and became a lot more formal.” She began scheduling appointments for portraits, sometimes as an excuse to meet people she couldn’t otherwise. She explains, “I always wanted to be working on something when hanging out.” 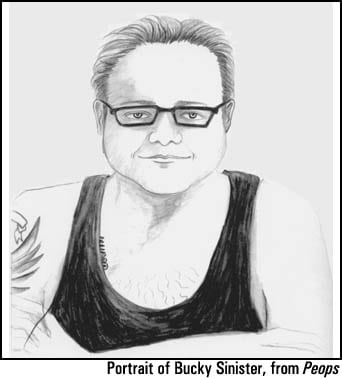 She adds, “Some people have a hard time when it comes to the written part.” Usually, people tell their stories while she’s sketching, and she writes down what they say. “I’ve only had one instance where a person refused to talk to me. They wrote their story themselves.” While keeping them anonymous, she said they’re a writer by profession. Another time, one of her best friends found it difficult to talk to her—“They thought, ‘shouldn’t I already know all of their stories?’”

I ask her how she first got into the punk scene, and while she questions if “scene” is really the right word, says, “I’ve gone through phases with the whole punk thing. I first saw punks when I was in London in 1977, and I was amazed at the visuals: the clothes they wore and the hairstyles.” Being a visual artist, it’s fitting that she mentions this aspect first. But the music also played a part: “I listened to the Ramones, Blondie, Talking Heads—I really liked Talking Heads—the Clash and the Sex Pistols. All the usual bands.”

Then she went to art school, “Where a lot of kids were somewhat punk, but everyone was doing their own art thing,” she says. After school, she went to the West Coast, where she had a boyfriend who was in a band. Being surrounded by musicians, she says, “I started doing flyers for shows. My first art show was in this punk club.”

Fly came to New York in the late 1980s, and got involved with ABC No Rio, a collective of punks and artists at 156 Rivington Street on the Lower East Side. She says, “I was involved in ABC No Rio more as an artist than as part of the punk collective.” This was also the time when she first truly started squatting. “I stayed in a squat on the West Coast, but that was more transient,” she says, making a distinction between that and the type of squatting she did in New York, “which was more like building your own house.”

Which brings us to me asking her if she ever wanted to give up squatting. After deeming it a “loaded question,” she thinks for a few moments. When she does answer, the words flow easily: “It would be really hard to give it up because it’s not like you can say, ‘Oh, I’m not going to be a squatter anymore.’ You need a really good-paying job to be able to afford rents in Manhattan. You have to conform to certain career goals.” She’s quick to refute the negative image sometimes associated with the practice. “The word ‘squatting’ has such a bad connotation in the press. It’s a really derogatory term. (Squatters) means people who are freeloaders and junkies, but with my experience it’s more the idea of homesteading. You have to be committed to doing a lot of hard work. When we came here, the whole east side of this building had been gutted in a fire.” She described the process of restoring the building: she and her fellow squatters replaced the roof, installed new floors and ceilings, got the electricity running, and put in new pipes, as well as doing the perhaps more routine work of putting down finished floors and painting the walls. She contrasts this with many prewar apartments in New York, which are expensive “firetraps,” because the electrical wiring hasn’t been updated. Ironically, “squatters always get targeted by the city as their buildings being firetraps.” Ultimately, while driven to squatting out of economic necessity, she finds it holds a deeper appeal. “It’s really empowering to be in control of your own environment.”

Considering the gentrification of the Lower East Side, she says, “It’s kind of inevitable. People with money are running out of places to inhabit in Manhattan, and everyone wants to live in Manhattan. The gentrification of the Lower East Side is really about its location; it’s so close to everything that’s going on in Manhattan. But the whole island is a developer’s dream at this point.” She points out that the housing projects along the East River, on the far side of Alphabet City, are “occupying prime real estate.” Referring to developers planning in this area, she says, “The hawks are circling.”

I expected that Fly would have a lot to say about squatting, but I was less prepared to hear about biodiesel—which is not, as I made the mistake of terming it, “french fry oil,” although it comes from vegetable oil. When processed, it can be used in regular diesel engines. Her friend Brent “Arrow” Baker, who lives upstairs in the same former squat, is the CEO of Tristate Biodiesel, a company producing the fuel. “He did a cross-country tour called the ‘Carnival of Chaos’ with fire-eaters, circus performers. He met two women in San Francisco who were cooking up their own biodiesel. That’s how he got interested in it. The whole purpose of the shows was talking about alternative lifestyles yet he was giving money to oil companies at every gas station.” He’s now looking to build a factory in New Jersey.

Currently, Fly is working on a comic about Tristate Biodiesel for World War 3 Illustrated, as well as a new Peops book (possibly on Manic D Press). She’s working with the Killer Banshees, a group of artists who created the Peops CD/DVD, and recording spoken word for CHRON!IC!RIOTS!PA!SM! with Craig Flanagin. When I visited, she was just finishing up the cover of Hungry March Band’s new CD. Her biggest project? “I’m still working on my house. That’s the ongoing saga.”