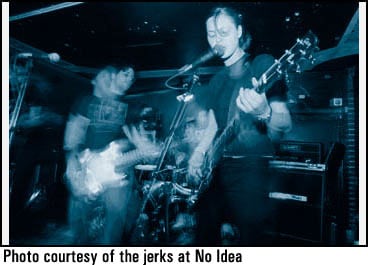 Well, it happens a lot, but I don’t have to happy about it. It seems that in conjunction with releasing my favorite release, Not Revenge… Just a Vicious Crush, Fifth Hour Hero broke up. Fuck you, Canada. FHH played a pitch perfect mix of stratospheric anthems—think early and mid-period Hot Water Music—with oscillating female/male vocals. It’s that in-a-smoky-room, yet in big sky, bright feeling (and paradox) that gets me every time. It’s melodic, sweeping, and even in their moments of defiance, sweet and personal.

I hate interviews being eulogies…

Todd: There’s a quality of sexuality in Fifth Hour Hero, a stark contrast between the female and male voices and this is one of the elements of the band that jumped out at me the first time I listened to you. At what point did the band realize and push that the two main singers’ voices could be used solo or intertwined?

Genevieve: It happened naturally, just like sex, I guess! It’s not something we planned. At the beginning of the band, I was only playing guitar. I never thought about being a lead singer, but years passed and I started to feel more and more comfortable with the idea of being on the spot.

Todd: What’s the biggest drag being a Canadian band?

Matt: The only thing that really sucks is the borders. We have to buy visas and they are expensive. Besides that, I think it’s great to be a Canadian band.

Todd: Is it true that you were denied visas to the United States due to not “being a big enough band”?

Matt: We were not denied visas. What happened is that we wanted to get visas since our new record is coming out and we want to do a lot of touring. We got referred to this company that I won’t name, so let’s call it “Bad Teeth.” I get in touch with Bad Teeth and this guy—let’s call him “Pee Wee”—is really nice to me. He tells me what he needs to fill out our application forms for visas. Everything was cool till he asked for thirty pages of reviews and ads of our band. Since we are still a small band, it’s kind of hard to find that many pages on us. I spent two days looking for old ads and reviews. When I finally sent him everything he needed, he wrote me back and told me that all the stuff I sent him was not enough. I called No Idea (Fifth Hour Hero’s label) and told them to call Pee Wee to see what was going on. Apparently, Pee Wee told No Idea that he’s just working with big bands and even if I would send him sixty pages of press, he will never work with us. So, finally, we will have our visas really soon with another company. Thanks a lot, Pee Wee.

Todd: What’s the fine if you get caught crossing the border without the proper paperwork?

Genevieve: I think you can’t go through the States for five years.

Todd: How did you come up with the band name Kisses and Guns Radio Hour, prior to settling on Fifth Hour Hero?

Genevieve: Somebody—let’s call him Pee Wee again ‘cause I like that name—so, somebody once told us that Kisses and Guns Radio whatever was a really good name for a band. When we found out that Pee Wee was actually a dog, we changed the name to something we thought better.

It’s our old bass player that came up with Fifth Hour Hero. When he quit the band and we realized that we were stuck with that name, we almost broke up.

Todd: When was the last situation you were stuck in that you wished you had more imagination to find a solution to the problem?

Genevieve: It was actually a couple days ago when we were stuck in Vancouver waiting for our transmission to get fixed. I had to take a cab to pick up our bags in the van and bring them back to the venue. When it was time to pay the driver, he told me it was ten dollars more than what the meter indicated. Since I’m so naïve—and I should have learned from all the bad episodes with Pee Wee—I gave the driver the extra ten dollars. And worse, I even tipped the guy. So, if I’ve had more imagination in this situation, first, I would have taken the time to realize that the driver was screwing me up, and second, I would have punched him in the face.

Todd: What was the last ingenious thing you’ve done?

Matt: Using my buyout money to buy beer instead of food is probably the smartest thing I have done in years.

Genevieve: Using my buyout money to play air hockey instead of buying beer.

Todd: Being from Canada, what’s the coldest you’ve ever been?

Matt: Two years ago I could not take a shower for a week ‘cause the water was frozen in the pipe. How cold is that, brother?

Genevieve: The same year, I didn’t shower for a week ‘cause it was too cold to take my clothes off.

Todd: What were the circumstances you recorded a song on Against Me’s Searching for a Former Clarity?

Matt: We were on tour and we played Baltimore while Against Me! was recording Former Clarity. We stayed in their rooms for two nights. Andrew called us one morning, asking us if we would like to do gang vocals for the record. Of course we didn’t hesitate. We got to the studio, did the gang vocals, and Tom said that Geneviève’s voice would be perfect for a part of their song. She did it and I think it sounds really great.

Todd: You’ve stated, “Confessed crimes are forgiven crimes.” Let’s test that. How did drugs and sex abuse drag down earlier versions of the band?

Genevieve: This whole story has been out of control. We were not addicted to drugs. We were addicted to cereal. We were always ending up in grocery stores in the cereal alley, opening every box and eating like pigs till we threw up. Of course, we couldn’t go on like this. So people did leave the band. Afterward, somebody—let’s call him Pee Wee—told us that beer was made out of malt. Wow, imagine. We traded our bowls for bocks. Some still drink until they throw up, but, in general, things are back to normal. Sex abuse: that’s a problem we haven’t solved yet.

Todd: This version of the band has been relatively stable since 2000. What, collectively, have you learned that’s lent itself to stability?

Genevieve: Actually, that’s not something you can learn from. Anyone could quit the band at the least expected time. You never know what’s gonna happen next.

Todd: In the grand tradition in the best of pop music, musically, Fifth Hour Hero is very bright and happy-sounding, but the lyrics are mostly dealing with panic, confusion, betrayal, loss, and anger. What has been the largest emotional hurdle for the person who writes the lyrics?

Genevieve: Wow, your description of our lyrics just makes me think of the last episode of Days of Our Lives…I think that just like anybody else, sometimes you go through hard times, and then things get better. And everything might go wrong again and so on…. I guess it is easier to find inspiration in bad days than in good days. As long as we don’t cry and scream on stage and start wearing make up that will drip from all the tears we shed, we’re good!

Todd: Has anyone in the band been mistaken for anyone famous?

Matt: People sometimes think that I’m Hugo from The Sainte-Catherines. Probably because of the beard.