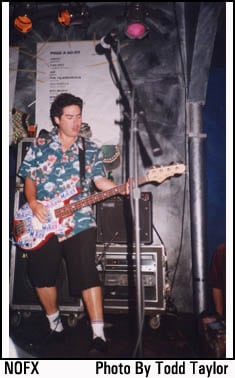 Dude, I’ll admit it, there’s no credibility in liking NOFX. They’re critical kryptonite, easy to attack and mock. Two things endear me to them. 1.) When White Trash, Two Heebs, and a Bean was initially released, it hit me perfectly. Melodic, funny, fast, understandable. Plus, the ladies seemed to like it more than Crass for making out to (an important lesson for any single punk). I eventually wore out that tape. I bet I could karaoke that whole fuckin’ album and barely realize it. 2.) One of the last fights I got into, I totally won at a NOFX concert. It was in Ventura, probably around a decade ago. Das Klown opened. Some dude picked me out randomly (didn’t see him very well. I wasn’t wearing my glasses and taking photos), and he intentionally hit me square in the face, but this dude hit like his fist was a squishy package of hot dogs. I landed a couple of shots before the bouncers threw me out. I walked back to my truck, put on my glasses, put on a hoodie, showed my camera pass at the window, and got back into the show within five minutes. Good times.
I’m a loyal guy, especially to music that was right for me at the right time. Fat Mike, the lead singer and bassist of NOFX pretends he’s kinda dumb, but he’s not. He and his wife, Erin, have made Fat Wreck Chords one of the most successful, truly independent punk labels in the world work for quite some time.
NOFX has released quite a few records.
They tour a lot. They’ve even been to Asia and South America.
This interview was conducted in the summer of 2006, yet it’s oddly relevant.

Todd: Who’s the enemy?
Mike: The enemy is not the conservatives of America. It’s the religious people of America. I’m reading this book. It says not to be tolerant, even of moderates.
Todd: How would you have a belief system, then?
Mike: I haven’t gotten far enough to see if he’s just against people having faith, but if you’re part of any kind of organized religion, you intrinsically have less respect for other people. I’m just trying to formulate some good stage banter instead of just saying, “If you believe in God, you’re a total fucking idiot,” which I have said before and will probably say again. But, with these Christian bands on this tour, I’m getting really angry and offended.
Todd: There’s bible study on the Warped Tour now, right?
Mike: Yeah. I went to the first one. I’m going to start going more.
Todd: The Warped Tour, I have to be honest, freaks me out. I feel uncomfortable here.
Mike: A lot of people don’t and think it’s this weird, corporate thing. I think you have to be on the tour to realize how chaotic and cool it really is. You can go to Sam’s Town in Vegas and have a good time or you can go to the Mirage and feel totally out of place. It is what it is. I love the Warped Tour—not so much playing it, but hanging out with cool people all day.
Todd:  You’ve had your same road crew for fifteen years.
Mike: Kent, Jason, Limo.
Todd: How important are they to NOFX?
Mike: They’re super important. We didn’t hire these people because they were super talented. It’s just people who we got along with. They were in their mid-twenties when they started working for us. We’re all the same age. We met Kent at a small club in Vancouver. He was doing sound. J. Acker was a Dogpatch Wino, so he’d known Smelly forever. He was our T-shirt guy, so you don’t need any experience. Limo was a friend of Kent’s. Timmy The Turtle was with us since ’91, but he started working with Bad Religion. He was with us for about thirteen years.
Todd: What do they do?
Mike: Kent’s our manager slash tour manager slash sound man. Jason is a drum tech now, but he also does merch and takes care of problems and Limo does monitors and stage. Limo plays keyboards now, too.
Todd: So, it’s like having buddies on tour?
Mike: We’re all best friends. We pay them ridiculously well, so it’s not like they’re going anywhere. Jason has been known to make over six figures on the Warped Tour alone, but that’s because he does scams all over the merch world.
Todd: Such as?
Mike: I can’t tell you… he’s a distributor of all kinds of goods. So, yeah, our crew; they’re all part of the band, for sure. 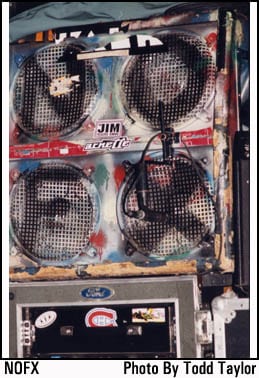