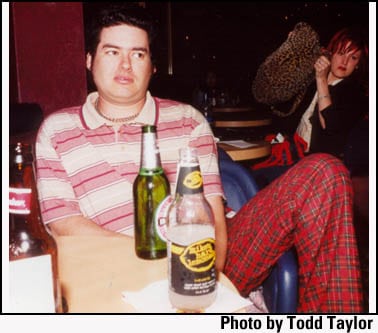 Interview with Fat Mike and Erin of Fat Wreck Chords and NOFX: Interview by Sean Carswell and Todd Taylor

I was thinking about that whole idea of how behind every great man, there’s a great woman.  Something like the stories of George Washington coming home from Valley Forge and Martha waiting there for him with a bong and a big fat bowl packed. Then I thought of Fat Mike (who’s kind of like a punk rock George Washington, if you’re drunk and living in my brain) because in the past couple years, he managed to tour with Me First And The Gimme Gimmes plus NOFX and also write, sing, and play a bunch of funny songs on two cool NOFX albums. And then there’s Fat Wreck Chords, which has recently put out great albums by established bands like the Swingin’ Utters and Avail, cool albums by new and unknown bands like Fabulous Disaster, and even rescued a few bands from major label obscurity.  I’m sure I wasn’t alone in wondering how one man can do so much. Is there a great woman behind him swinging a riding crop?
Of course there is. It’s Erin, his wife and partner in Fat Wreck Chords.
So that led to the next obvious question: Has anyone ever interviewed them together? And, surprisingly, no one has—until now. Todd and I got a chance to sit down with them at the DIY Bowling tournament in Vegas. Here’s what they told us about good business, bad business, friends, punk rock, sex toys, and Fat Mike’s dad.

Sean: In your relationship, who’s the superhero and who’s the sidekick?
Mike: I’d say probably I’m the superhero, but maybe in our sexual relationship, it’s probably the other way.
Todd: Since you opened it up already, have you ever had sex in the Fat Wreck Chords office?
Mike: Yeah.
Erin: Yeah. We have.
Todd: On an employee’s desk or on your own?
Mike: It wasn’t on a desk, actually. It was in a chair.
Todd: Erin, you’ve been with Fat since its inception, is that correct?
Erin: Yeah. When it started, it started as a side project. Mike was touring and the first thing we did was a NOFX seven inch. It was just a very small little thing, and when he went on tour, I’d do all the mail order and handle everything. In the beginning, it wasn’t really a business. It was kind of like a hobby.
Mike: Right. She was supporting us.
Erin: I was. I used to work in public relations.
Mike: And I was making my two grand a year in NOFX.
Erin: We got engaged and I thought, I’m gonna have to support this guy for the rest of my life, but you know what, it’s okay. It’s all right. I can handle it. And then look what happened. It turned out okay.
Todd: It turned out pretty good.
Sean: How broke would Fat Wreck Chords be if you weren’t doing the accounting?
Erin: I think we’d be a lot broker. I definitely think so. That’s where Mike and I—that’s one of our big arguing points is about money.
Mike: Because I don’t care.
Erin: He doesn’t care.
Mike: And she cares.
Erin: And I care. It matters to me that we watch everything. And he just takes the path of least resistance. Whatever’s easier, he just goes, “Ah, okay.” And I try to look at all the numbers and the figures and budget it and go, “Well, we shouldn’t really be doing this.” Which is actually a good mix.
Mike: It is a good mix.
Todd: So who signs the bands? Who’ll do the creative talent scouting?
Erin: Mike.
Mike: I sign and I scout. But we also have a meeting once or twice a week.—an office meeting—and I’ll bring up a band and ask, “Yes or no?” And if everyone’s like, “That’s lame,” then we pretty much don’t sign them.
Erin: It’s definitely happened before when we were interested in bands and we had the office meeting and they were like, “No.” And we didn’t do it.
Todd: So how’s the Dillinger Four coming along?
Mike: I don’t know. We’d like to have them on our label, but you know they’re talking to Epitaph. I like those guys a lot. Cool guys.
Todd: Great guys.
Sean: Great band. Is there any band you can think of that you really wanted to sign but weren’t able to get?
Mike: That’s a good question.
Erin: Yeah, it is a good question.
Mike: I don’t think so.
Erin: Yeah, I can’t think of one.
Mike: The one band I really wanted to sign was Snuff, and I got them.
Todd: How long was the courtship with Snuff, because Snuff was gone for a bit?
Mike: Well, we toured with Guns And Wankers in England and I knew Duncan had been in Snuff and he told me, “Me and Simon are starting to jam again.” He said, “But there’s no money.” I said, “Hey, if you guys get Snuff back together and use the name Snuff, I’ll give you a big old bonus.” I gave them fifty grand or something.
Todd: Wow.
Mike: He’d never made anything in the band before. So he did that and because of that, they got back together. It’s been awesome.
Sean: Have there been any recordings that have come back from the studio and you’ve just flat refused to put out?
Erin: There have been some that we should have refused.
Todd: Such as?
Erin: I don’t know if we should say that.
Mike: Yeah, we can’t say that.
Erin: There have definitely been records that, once we got it, we weren’t happy with it.
Mike: We’ve had a lot of bands remix.
Todd: Didn’t Propagandhi remix a couple of times, three times?
Mike: We had Propagandhi remix. We had Zero Down remix. We had Strung Out remix. There are probably five or six bands.
Erin: Well, Propagandhi went into the studio like five times in the last four years to make this record.
Mike: Probably five times.
Erin: I think they did. They actually went in; then sometimes they would just cancel it.
Mike: Finished the record then said, “No, we’re going back to redo guitars, to remix.”
Erin: We gave them money for the record four years ago.
Mike: Four years ago, we gave them an advance for this record.
Sean: It came out well. It’s a good record.
Erin: Yeah. It was actually pretty funny because Jord from Propagandhi just called me the other day and he was like, “I’m confused, You guys gave us money on this record four years ago but it never seems to show up on any of our royalty statements. Are you ever gonna charge us back for that?” And I’m like, “It took you four years to make the record. When the record comes out, I’m gonna charge you back.” He said, “Wow, that’s pretty cool. You just loaned us that money for four years.” “We’re waiting. The fans are waiting.”
Mike: We really don’t push bands at Fat, at all, to record or do tours. Like I never called up Propagandhi and said, “Hey, how about a new record?” Whenever a band’s ready. 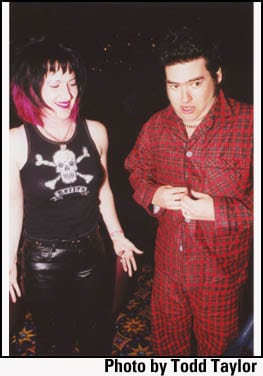