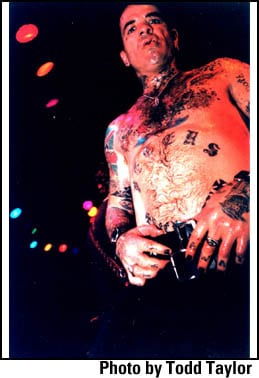 Interview with Duane Peters: And an updated introduction by Kristen K. By Todd Taylor

This interview initially ran in Razorcake #3, 2001. Here is the original intro-

Duane Peters is the lead singer of the U.S. Bombs and Duane Peters and the Hunns. He’s also a professional skater for Beer City. He’s 40. By all standards, he’s one indestructible motherfucker who should be very, very dead by now.
A lot of people in rock pretend to be a threat. It helps sell records. Sure, with the proper lighting, they can look scary or demented. Sure, they may be insufferable pricks who thrash hotel rooms, get arrested once or twice, or get their Masters degrees in Assholeishness. But a true rock threat? Folks like Marilyn Manson, Eminem, and Billy Idol are pussies. True threats to this nation’s youth don’t have movie star girlfriends, don’t get Grammies, and usually don’t have a great set of teeth. This one doesn’t even have clean underwear.
Enter the Master of Disaster, Duane Peters, in the dirty deep end of sex, drugs, and rock’n’roll. It’s been said that his influence on skating is as huge as Orville and Wilbur Wright’s was to flight. Slash and burn, coping-dusting, pool-defying mayhem. He’s forgotten all of the tricks he’s invented. He’s also forgotten all of the bands he’s been in. Amongst what he does remember is that he was once fired by his used car salesman dad for shooting speed into his neck during business hours. He has also robbed a 7-11. Twice. In one day. Without completely realizing it.
In the meantime, he’s maintained founder and godfather status as the person who connected the positive and negative battery terminals of skateboarding and punk rock, electrocuted a lot of people in the process—including himself—and doesn’t look like he’s going to let go any time soon.
I caught up with a very talkative, extremely nice, and sober Duane and his long-time girlfriend Trish. I had a fun time. –Todd Taylor

Minus a few more teeth and a few more arrests, the Master of Disaster has been busy in the eleven years since this interview. Peters was declared a legend by Transworld Skateboarding in 2003 and was the subject of a bio-pic, Who Cares: The Duane Peters Story, by Black Label Skateboards in ‘05. That same year he got hitched to Corey Parks of Nashville Pussy who bore him his youngest son, Clash Thomas Parks. Not a stranger to taking the good with the bad, Duane later divorced Parks in 2009. Between ’04 and ’07, Peters polyamorously split himself between Exploding Fuckdolls, the Die Hunns, and Gunfight, churning out countless recordings.
In ’07, DP took a serious blow when he got news his twenty-year-old son, Chess (Chelsea), was killed in a car accident. This ultimately landed Duane back in rehab later that year. Feeling inspired, Peters penned and starred in a screenplay, Hostility Hotel, a slice-of-life tale of junkie woe like only Duane can tell it: romantically bleak and charming. Shot on a hand-held, it’s been tied up in post-production and will tentatively be released later this year.
In 2010, he was rushed to a hospital for a gnarly gash nearly the length of his shin. Picture the San Andreas Fault of viscera and exposed bone. The doc wanted to amputate, but Duane’s skate notoriety saved his leg. An attending nurse recognized him and persuaded the doc to stitch him up. A slow, painful recovery began, but as we know by now, Peters isn’t a man to stay down long.
While still booking gigs with the Bombs and designing his own line of vegan skate shoes, Duane has become involved in two new acts, Duane Peters & The Great Unwashed and, An Evening with Charles Bukowski. The Great Unwashed, a six piece with violin, keys, and acoustic guitar is gearing up for their first full-length to drop in February off Black Vinyl, while the latter, performed in Germany, is an interactive stage-play while yours truly reads Bukowski. The ensemble is planning a European tour in the fall.
In January 2012, DP came upon two anniversaries: the formation of the U.S. Bombs an unbelievable nineteen years ago and the death of his son. Despite his leg still on the mend, Peters just returned to the States having competed at Vert Attack 6, a skate competition in Sweden. Fender has also pulled him into its rank and file by throwing him a biscuit of 500 limited edition models with all the trimmings featuring the orange and black design off his Pocket Pistol deck.