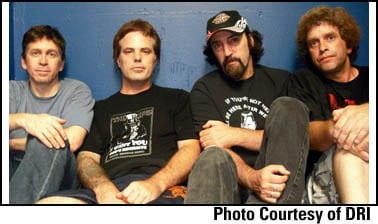 Interview with DRI: ''Someone told me we single-handedly ruined punk rock forever.''

DRI has spent the better part of nearly thirty years playing all over the world, making records that have gone down as timeless classics, and helped pioneer thrash. Most bands would have called it quits years ago, but not DRI. Almost thirty years later, they are still touring all over the world and are in the middle of writing a new record. Time has not worn down these Dirty Rotten Imbeciles one bit. If anything, it has made them faster, louder, and better than ever!