Interview With Dead To Me: Excerpt From Razorcake #46 By Adrian

To check out a totally bitchin’ full length interview with Dead To Me, pick up the print edition of Razorcake #46. Due to space restrictions in the world of analog media, there are some choice bits that we had to save as web exclusives. Here are excerpts from our talk with Dead To Me. If you want to know where the band’s favorite city is, why there’s a song about Jack Dalrymple, or how they would stack up in the pages of Tiger Beat you should read on. With a new album coming out soon on Fat Wreck, you can also witness as Chicken struggles to come up with a story behind the title African Elephant. Last but not least we’ve included a bit that illustrates the pitfalls of conducting an interview in a parking lot.

Adrian: So then what’s your African Elephant? Seeing as that’s what your next album is being called and all.
Chicken: That’s a whole other story man. That’s uhh…
Nathan: You haven’t worked out a short enough story for that yet.
Chicken: African elephants have always been around me, for some reason, in my life. I don’t know why. But they’ve always been around me and I kind of like their imagery. I’ve always been drawn to them and…
Jack: They’re majestic.
Chicken: They’re majestic.
Todd: Like real African Elephants?
Chicken: No, the imagery.
Todd: Like Armed Forces, Elvis Costello, that kind of stuff.
Chicken: Right, exactly.
Adrian: Or the circus.
Chicken: Yeah, or the circus unfortunately. Yeah. Which is kind of a bummer that elephants have to live in circuses, but what can you do, you know?
Nathan: Their kind of, their all like us you know, they… 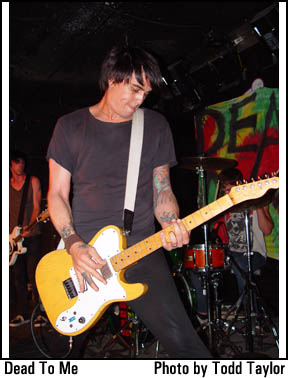 Adrian: So what would you guys say is the place you guys love to go on tour, not even like to play, but just to go there?
Nathan and Jack:Berlin.
Chicken: Berlin. Tokyo… Geeze, it’s hard to beat Europe. Europe is so amazing. People treat you so well there. The shows are always really fun.
Jack: Kids are excited for a show. It’s not like this (crosses arms).
Chicken: Yeah, they jump around.
Todd: I like Berlin. Berlin’s interesting geographically, it’s in the middle of everything but it’s still far away, so people are still excited when you’re around.
Chicken: Exactly.
Todd: It’s also weirdly the cheapest big city in Europe.
Chicken: I know. That’s what I’m saying. Rent’s not even that bad, and you can go get food and drinks…
Nathan: Music and arts, everything.
Chicken: It’s a really cool city man, and uh, I dunno. I’ve only been to Europe twice, and we just got back and that was my second time, so I’m still at the point where just walking down the street is really, really, fun and exciting for me. I just look around at the buildings. We were in Hamburg the other day, and they were having this harbor festival, and I’m like, “What’s going on? Why are there hundreds of thousands of people walking around totally shit-faced?” and this guys like, “Oh, it’s the anniversary of the harbor. It’s eight hundred years old.” It’s like, wow, we don’t really have any eight hundred year celebrations back home. Nothing is that old.
Adrian: After two years of playing from Cuban Ballerina. How did you guys try to make it interesting? Did it ever get boring?
Chicken: I don’t think it gets boring, really, but that record’s only eleven songs and you can only play it so many times before they… what’s the word I’m looking for? I dunno; it’s not boring. The new stuff is always exciting to play because you’re more attached to it because it’s closer to you. It just happened. The old stuff kinda happened a while ago. But it’s also really good for me, therapeutically, because a lot of those songs are about a lot of stuff I was going through when I wrote that record. It’s good to be reminded of those things I was going through.
Adrian: Does it just get hectic being in like, what is it, Dead to Me, Re-Volts, and Swingin’ Utters?
Jack: Yes…
Chicken: And Filthy Thievin’ (Bastards) sometimes?
Jack: No, they kicked me out of that band.
Chicken: They had a song about you and they kicked you out? I think if a band sings a song called “Be Like Jack (Dalrymple),” you should have automatic entrance into said band like for life.
Todd: Appearances every Thursday.
Adrian: Why do they say, “You hang out at the temple, anyway,” or whatever, in that one song.
Jack: Which song?
Adrian: “Be Like Jack Dalrymple.”
Chicken: “Take life simple?”
Jack: “I bake potatoes and I smoke a blunt.” Yeah, but that’s not even what I do. I bake potatoes?
Chicken: I’m guessing. I don’t know, but Johnny wrote that song…
Jack: And Johnny’s a weird dude.
Chicken: Yeah, and let’s be honest, he may or may not of run out of rhymes. Like, “What up, your name’s Dalrymple… Ten people.” Yeah. “He hangs out at the … let’s see…”
Jack: “Simple rhymes with Dalrymple.”
Chicken: Yeah, and, “Let’s see… he hangs out at the mall… no… temple! I got it. Temple!” And then that was it, you know?
Jack: Yeah, but his rhyme was “simple.”
Chicken: Which also rhymes with Dalrymple and temple. He couldn’t be like, “He puts a gun to his…” Oh no, it’s not even “hangs out at the temple.” It’s, “puts it to his temple.”
Adrian: For real, is it?
Chicken: “Take that gun from your temple.”
Jack: Nah, “Take it...” Yeah, maybe. (Singing to himself)“Take the gun from your temple.”
Chicken: “Take the gun from your temple.” So it’s not so much hanging out at the temple and being enlightened.
Adrian: Wow, I misheard that. I just assumed that maybe he was a hardcore Buddhist or something.
Chicken: That’s okay. Just maybe on your second interview you can do a little research. That’s okay, that’s fine, Adrian… You don’t think I’m serious do you? I’m totally fucking with you.
Adrian: I’m just trying to think back to the Filthy Thievin’ thing, and I’m maybe I should of dug up your criminal records and stuff, too. Get into the medical records.
Chicken: That’d be a good time. 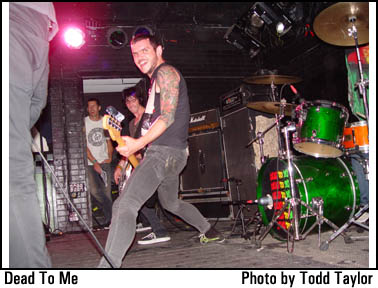 Adrian: So when you guys make it to Tiger Beat magazine eventually, how do you think each one of the people in the band is gonna be characterized? Like who is gonna be the quiet one, who is gonna be the sexy one?
Jack: I got a lock on the quiet one.
Chicken: Jack’s gonna be all of them. He’s the quiet one, the sexy one. I’m gonna be the mean one, probably.
Todd: Who’s the bad boy?
Chicken: Bad boy would be Nate?
Jack: Ian.
Chicken: Ian. Yeah, he’s a wild card. Our drummer Ian’s got an alter ego.
Jack: Good looking kid. Loves the sauce.
Chicken: Loves the sauce man. Loves it! And does amazing, amazing, entertaining things on said sauce. So it’s a good time. He’ll be the bad boy for sure.
Adrian: And what about Nathan?
Chicken: The arty, heroin chic guy, kinda. Quiet, reserved genius dude.
Jack: Might also need a sandwich.
Adrian: You guy’s need to get like the fat guy now.
Jack: That’s me. I am the fattest guy in the band.
Oblivious Girl: Do you have a lighter?
Chicken: It was awesome.
Oblivious Girl: Do you have a lighter?
Chicken: I don’t sorry.
Jack: No, sorry.
Oblivious Girl: (walking away) Oh, okay.
Todd: Push the little thing in your car.
Jack: Yeah, try the cigarette lighter.
Chicken: How about just her asking like four times. “Maybe if I ask again, one will appear.”
Adrian: We could try to strike it for you with a rock on the concrete.
Chicken: Sparks and shit.
Todd: Just put the cigarette there.
Jack: Do it, do it.