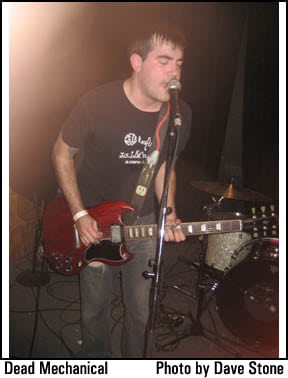 Do you sit up and take notice when a band plays in between twenty other bands and totally defies your expectations? In this case I was like, “Who the fuck are these guys?” I had to get their CD. I had to know when they were playing again. I may go see a lot of bands, but I don’t see a lot of bands over and over again. Mission Of Burma comes to mind. Seeing every show they play near me is like drinking water. Necessary. Dead Mechanical may quickly grab the crown from the current kings. Listen to “Guantanamo Calling” for a taste: whiskey-soaked vocals, sharp as glass guitar chords, jackhammer bass lines, and four on the floor drumming. I would have no problem putting this one song on infinite repeat on the player. It really is that good.

Sean: How glad are you that Obama won?
Lucas: There was a woman who was singing “The Greatest Love of All” with her windows down. And somebody pulled up next to her and started singing “The Greatest Love of All” with her! And it was incredible. I’m also happy. I think he’s going to be a great President.
Sean: Do you consider yourself a political band?
Lucas: I would say that I write songs about politics sometimes, mostly because I’m like, “What should I write a song about?” and I start in on whatever they are talking about on C-SPAN radio.
Matt: Lucas’s songs are probably a little more political than mine. I kind of write about social issues.
Lucas: The personal is political.
Sean: What recurring themes do you see coming back to your songs? Perhaps ideas that you weren’t even aware of when you were making them?
Lucas: I think I end up writing a lot of songs about places.
Sean: How do your local surroundings influence your songwriting?
Lucas: I think we are up to three things that have Calvert Street(a street in Baltimore) in them! I haven’t lived here that long.
Matt: In the next record, there are going to be a lot more Baltimore-centric songs than the first one.
Sean: In what ways are you surprised that “corporate culture” is destroying the U.S.?
Matt: That’s a question for Lucas.
Lucas: In what way am I surprised?
Matt: It might not really be surprising.
Lucas: Can I take a pass on that one?
Matt: No! Start talking. 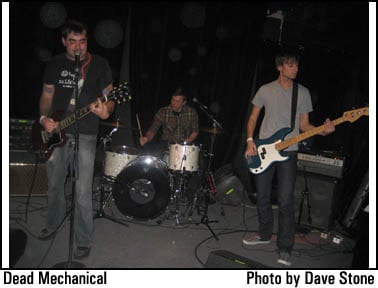 Lucas: Did you ever see the Enron movie? The Smartest Guys in the Room?
Matt: Tell me about it.
Lucas: I was watching it a couple years ago. What struck me is, what Enron did was something that nobody could possibly understand. You could imagine that these companies are so far removed from that “produce product/sell that product,” that there is not any serious way of understanding what they are doing. In my work, I get a lot of it. I do a lot of anti-trust type work. It’s astonishing how much people come up with shady accounting. I don’t think I’m allowed to say anymore, based on all the confidentiality agreements that I signed. But, basically, everybody is lying about how much they’re earning.
Sean: What the fuck is your job that you have such high confidentiality?
Lucas: It’s not anything exciting. I’m a temp lawyer. Basically, we get called in when there’s a law firm that has to look at a bunch of documents and there’s too many for them to do it themselves. So, I get to read these internal corporate documents and emails and such and have to keep it confidential. Also, in my spare time, I do a little freelance spying for the Ukrainian secret police.
Sean: What’s the most almost-secret-but-you-can-tell-us part of your job?
Lucas: Oh, there’s really nothing exciting. One of our songs, “Dear Marketing Department,” was inspired by reading a bunch of ideas some marketing guy had for getting his company’s product to play a pivotal role in a James Bond movie. I just found it really bothersome that there are people out there whose job it is to fuck up art by turning everything into a commercial. If you can call a James Bond movie art. Which I suppose you could if no one was around to hear you.
Sean: Have any corporations asked you—even in your personal life—to sponsor you?
Lucas: I guess in the sense that I have a job, it’s pretty corporation-heavy.
Matt: I don’t believe that we’ve ever gotten any offers. If we did, we would totally say no!
Lucas: I don’t know how corporations decide who they are going to sponsor, but whatever it is, it’s not us.
Sean: Why is your minivan so enticing to car thieves?
Lucas: Well, the Dodge Caravan—this is what the police told me when it was stolen—is the easiest car to steal in the world. All you need is a screwdriver. You can actually just pop this thingy over here and start the car up with this same screwdriver. So, yeah. Easiest car to steal.
Matt: Do you think the ever-present McDonald’s bags have any effect on it?
Lucas: Maybe they do. There’s usually some Cool Ranch Doritos around here, but I cleaned up the car today.
Sean: Tell a story about the band that could have only have happened in Baltimore, and why it’s strictly Baltimorean.
Lucas: Well, we were playing a crab restaurant once and Billy Ripken and the guy that played McNulty came in and watched the set. Then, later, we all shot up some heroin in a vacant rowhouse. I thought to myself, “I bet this kind of thing never happens in Wilmington, Delaware!” The really funny thing is that a few months later, when we were playing in Wilmington, it did. For a real answer, I can’t think of anything Baltimorean that has happened to us in Baltimore. Once my car got broken into at The Ottobar while we were playing.
Sean: What was the coolest thing you saw in Tim Kerr’s house? That place is like a museum.
Lucas: Holy shit!
Dan: The amps we got were awesome. We took the amps that Don Zientara used to record all the old Dischord records. Mike Vasquez, who recorded us, told us about all the shit Tim had. I didn’t really see any of it. But he said he had, like, Glenn Danzig’s Misfits gloves. 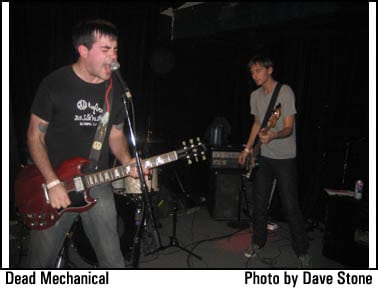