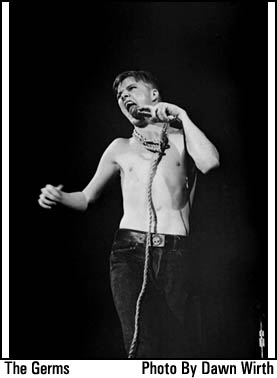 Good things don’t last. That’s what makes them good—their ephemeral nature. For two years, Dawn Wirth was an LA punk regular, a frequenter of the Masque and documenter of the scene. With her trusty Canon, Dawn took beautiful black and white photographs of the Screamers (the best band of the original wave), Bags, Zeros, Mumps, and many others. Like Dadaist Hugo Ball, once the scene she knew changed, Wirth moved on. Recently a fire has been rekindled and Dawn is showing her important photographs once again.
Along with Louis Jacinto, Dawn will be showing her photographs at the Drkrm. Gallery in Los Angeles (address: 2121 San Fernando Road, Suite 3, Los Angeles, CA 90065). The opening reception date is October 6, 2007; the show starts at 7 p.m.
Dawn would like to thank John Miner, Jesse Xerox, and Drkrm Gallery owner John Matkowski for all their help.

Ryan: Tell me about this exhibit you’re in, Destroy All Music. Are there going to be any other photographers involved?
Dawn: Yes, there is. His name is Louis Jacinto. I’m in the front room, he’s in the backroom. He, like me, was shooting photographs from ’77 on. I don’t know if this is his first gallery show. This is my fourth gallery show.
This week I finalized the pictures I wanted in the show—pictures that I think really represent Los Angeles punk.
Ryan: What pictures did you select?
Dawn: There’s a great picture of Alice Bag not being Alice Bag; it’s a shot of her just being normal Alice. There are two pictures from the Hollywood Forever Cemetery shoot with the Bags. There are three photos of Darby Crash from different times…like from the beginning (’76) to ’78. And then I’ve got Weirdos photos. Nicky Beat…but represented as Nicky—not the drummer of the Weirdos—but Nicky as himself. Nicky would have me take pictures of him all the time. So I’ve got a lot of candid shots of him that are amazing. I know that might sound arrogant, but he was an amazing person to photograph. I’ve got these amazing photos of Trudie Arguelles with the Zeros. The girl from the Plunger Pit.
Ryan: Oh, yeah. She was hot.
Dawn: Yeah, and Rock Bottom is in those pictures as well. He just happened to show up. I’ve got a picture of Danny Wilde from the Quick. The Screamers are represented. There are also two photos of the Clash and Devo.
Ryan: Did you include photos from that ’78 Winterland show you saw (AKA, the last Sex Pistols show)?
Dawn: No, because I don’t have the negatives for them anymore. I do have scans that I’ve turned into canvas prints; Jesse Xerox helped me create them. I think I’m going to bring them to the gallery, but I don’t think I’m going to sell them. I only did a limited run and I don’t think anyone will pay me what I think they’re worth.
Ryan: Backtracking a little bit, were you and Louis Jacinto aware of each other during the early days of the LA punk scene?
Dawn: Yeah, Louis was there. Alice Bag knows him. Trudie knows him. But I had never met him. It was a two ships passing in the night scenario. That or he really came on strong after I moved to England in June of ’78.
Ryan: And when you came back the scene that you had known was gone.
Dawn: Yeah. It splintered.
Ryan: So you found yourself falling out of it…
Dawn: Yes. I started taking photographs of my daughter later on.
Ryan: And so when did you start showing your work again?
Dawn: I started the year you interviewed me.
Ryan: 2005?
Dawn: Yeah.
Ryan: It seems like your desire to take photographs has been rekindled.
Dawn: Oh, hell yeah. I enjoy taking photos of bands again.