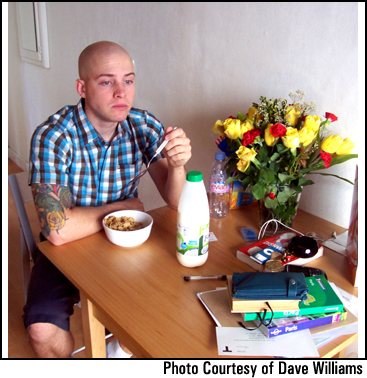 Dave: I’d been doing reviews for a while prior to writing for Razorcake, but I don’t remember specifically setting out to avoid being like other reviewers. I like to put a lot of heart and thought into anything I put my name on, and record reviews are certainly no different. Granted, it’s sometimes difficult not to be an asshole when something is so obviously phony or shitty; likewise, it’s tricky not to praise a record that you might have some personal tie to, but I think I’ve managed to remain pretty objective up to this point. That said, if someone wants to throw a fistful of dollars my way, I’ll start trash-talkin’ and ass-kissin’ like nobody’s beeswax.

Lauren: Have you ever looked at a review you’ve written once it’s printed and realized it totally came across the wrong way? Ever write reviews when you’re in a lousy mood and then feel badly about thrashing the material afterward?

Dave: I think that, given the relatively short amount of time a reviewer gets to spend with a record before passing judgment, inevitably there are going to be some changes of heart from time to time. Almost any instance in which I’ve given something a less-than-terrific review I’ve felt a slight twinge of guilt, because I know that a lot of bands are just starting out and that it can take a while to find your footing—but at the end of the day, I’m the goddamned authority on awesomeness, and a lot of you clowns need to get your shit together.

Lauren: I checked out the Myspace account for your band, Sedatives, and I’m a fan. Are you nervous about what kinds of reviews your 7” is going to get once it comes out?

Dave:I’d like to honestly say that I’ll be able to shrug off any criticisms, but the fact is that if someone puts down something that I’ve put a lot of energy and time into, it’s gonna be hard to fight back the tears. Really though, I know that not everything is for everyone, and I can respect if someone’s not into what we do. I’ve dished enough criticism in my day to gracefully be on the receiving end…maybe.

Dave:The Tracey Fragments is a movie by Bruce McDonald, who’s most well-known for his punk rock mockumentary Hard Core Logo. Before the movie’s release, Bruce put all the footage online and organized a contest in which anyone could re-cut the film in whatever format they like and the winners would get to be in the DVD extras. My girlfriend’s brother, Jason Gilmore, runs Urgency Company in Toronto, which makes movies and movie trailers. He wanted to make a music video for the contest and asked if he could use a Sedatives track, which we were more than happy to contribute. He ended up doing a super-slick job, making the top 5 in the contest and consequently making Sedatives a part of cinematic history…Canadian, independent, DVD-special-features, cinematic history. Plus, it’s got Ellen Page from Juno in it, so the kids should be crazy-stoked.

Lauren: You’ve been studying music at University. What kinds of things does one learn about when they are in school for Musicology, and why are you going after a Master’s degree in Arts and Culture?

Dave: My Musicology degree is pretty balanced in terms of both popular and classical courses. One of my professors, Will Echard, even plays Black Flag, Crass, and The Specials in his history classes. It’s easy to stay interested in a guy who’s a secret punk rocker. Naturally, there’s a lot of focus on opera and classical music divided by culture or historical era, be it Medieval, Renaissance, what-have-you—a lot of stuff I didn’t think I’d like until I was knee-deep in it. I hadn’t originally planned on pursuing a Master’s, but in my last year of my undergrad I had a Music & Gender seminar in which I spent a lot of time researching, writing and presenting about Rob Halford and the ultra-macho ‘80s heavy metal community’s bizarre acceptance and eventual co-opting of Halford’s so obviously-gay “London Leatherboy” garb. Upon realizing that there’s plenty of room in the intellectual/scholarly community for this kind of research, coupled with totally hitting my stride style-wise, I didn’t feel like I was done with University just yet.

Lauren: Give me the lowdown on your other writing projects outside of Razorcake.

Dave: I pretty much always have a pile of half-finished projects on the go. Currently taking a back seat to aimless internet-surfing and general procrastinating are; first, a short novel of embarrassingly-thinly-veiled fiction entitled Temporary Living, about a certain kid and his friends growing up in a certain hick-town outside of a certain nation’s capital. That one’s actually been 98% finished for years, but I just can’t seem close the book on it, so to speak. Second, I’ve got a zine/webzine, also called Temporary Living (http://temporaryliving.blogspot.com/), that I’ve finished one installment of and features contributions from some pals (and a lovely little piece from Ryan of Off With Their Heads fame!) and that I’ll update when time, contributor-interest, and creativity permit. Finally, there’s an oral history of Ottawa punk rock that I started some five years ago that is now on indefinite hiatus due to a laundry list of petty bullshit that I never envisioned being an issue. I’d love to someday revisit this, because it’s kinda my baby and it’s been so incredible learning about this government town’s legacy of angry kids. Sadly, getting all the key individuals back on board is an unlikelihood at best. Other than those, I’ve pitched a few biography/oral-history proposals to some bands who I feel need a comprehensive written record, but to no avail thus far. Come on guys and gals, books are way cooler than DVDs!

Lauren: Tell me your favorite: Thing to do in your hometown:

Dave:Ottawa has a weekly party hosted by my friends Emmanuel, Luke, and Brad called Rock & Roll Pizza Party. Every Thursday there are bands, beers, handsome dudes & cute girls dancing, punk rock records, and free pizza ‘til the wee hours. Understandably, it’s a killer time. RRPP has actually had a huge hand in bringing folks from the different punk rock subgenres together and creating a really familial feeling that I kinda feel has been lacking for a few years. Thanks for that boys.

Lauren: Band you never heard of before reviewing them:

Dave: I guess I’d heard The Tim Version before reviewing Still Have the Nerve to Call Ourselves a Band, but I guess I’d initially written them off as just another gruff-voiced pop punk band. I’m certainly glad I had the chance to revisit them.

Dave: Good question! My favorite movie about punk rock is probably The Future is Unwritten. I just want 1978 Joe Strummer to take me in his arms and tell me everything’s gonna be alright. I think we can all agree he was just a special guy. My favorite “punk rock movie” on the other hand, is perhaps an obvious choice, but definitely Return of the Living Dead. 45 Grave on the soundtrack, Paul Roessler in the movie itself, and Quincy Punx having a song about it on We’re Not Punks has carved a lovely little niche in my heart for this particular motion picture masterpiece.

Lauren: Thing to do before you play a show:

Dave: I don’t know that I have a pre-show ritual or anything like that. I don’t mind killing a couple of drinks before playing, that’s for sure, although I don’t get borderline-vomiting nervous anymore, so it’s not as crucial. I actually sorta like loading in with the other bands that are playing. It makes for good bro-down time—especially when that band is Statues.

Lauren: Reason for living in Canada:

Dave: Y’know, I’m not really sure. I’m a lot more interested in people than places, I think. I love that even though my friends are scattered between a few cities here, they’re never more than a five hour trip away. But I totally fell in love with Paris this year, Berkeley the year before, and New York City the year before that. As long as Jessica was with me (I know, barf), there were sweet guys & gals around, good bands from time to time, and I knew I’d being seeing old pals soon enough, I could be pretty happy anywhere.

Lauren: Thing about writing for Razorcake:

Dave: Without even a hint of ass-kissery, getting to submit my writing to a dude whose own writing and opinion I regard as highly as Todd’s is a total privilege. That guy has a way with words that is both incredibly smart and so obviously punk that the combination pleases me to no end. Mostly though, being a part of something intelligent, entirely sincere, and comprised of genuine people with their collective heart in the right place is so thoroughly rad. I feel pretty lucky to be involved. Thanks Lauren for setting this up—such a great idea! I can’t wait to read everyone else’s q&a’s.