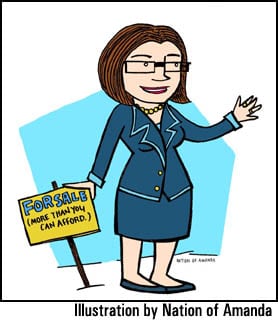 Interview with Danny Schechter: The Sub-Prime Problem By Chrispepus

In America, debt is reaching record levels. With real wages in decline, many have no choice but to borrow. Rising student-loan debt intensifies the problem, along with the Bush administration’s massive budget deficits, and inflation caused by the Iraq War and high oil prices. It is no surprise that the debt crisis is now engulfing the entire economy. Danny Schechter is one of the few journalists to provide meaningful coverage of the issue. In his 2006 film, In Debt We Trust, he was among the first to warn of the threat posed by the risky “sub-prime” loans and securities that ultimately played a large role in the current recession. In this interview, Schechter discusses America’s debt problem and some of the actions that can help fix it.

Illustration by Nation Of Amanda, myspace.com/onenationunderamanda

[i] The Federal Reserve Board is America’s central bank. It governs the money supply and oversees other banks. Its members are appointed by the president and confirmed by the Senate.

[ii]  Ponzi scheme, named for con-man Charles Ponzi, is a business scam where money from new investors is used to pay returns to earlier investors. The business itself generates little or no money and the scheme lasts only as long as the company can find new investors. Ponzi schemes are illegal.

[iii] President Bush’s former press secretary, Scott McClellan, stated many falsehoods about Iraq during his tenure. He has now admitted that the administration manipulated intelligence information to make a case for war.