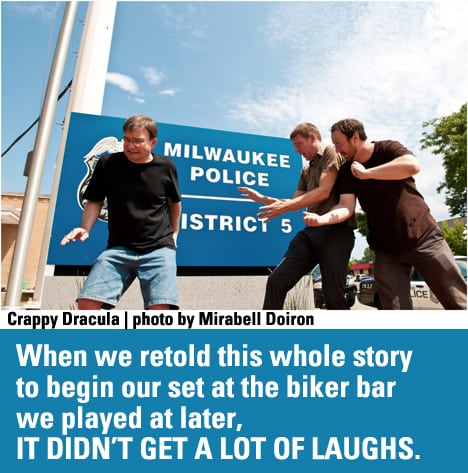 I knew I was in for an odd experience when I got Milwaukee joke-punk trio Crappy Dracula to agree to an interview. The band has kept Brew City’s toes tapping and sides splitting since 2006, with its less-than-perfect song catalog that includes standards such as “Earth Sucks,” “Diagnosis: Karate,” and “Margaritaville” stuck between banter during live performances that can incite laugh-induced tears, mass audience exodus, or (most often) confused snickers.

Suggestions for the site of our first meeting ranged from a Taco John’s a couple towns over, to a late night screening of Elysium at a suburban dollar theater. I didn’t know what to expect when the night finally arrived. Guitarist Justin Kern—who insisted the band chauffeur me to and from the interview—opened the rear door of drummer Brock Gourlie’s compact car and shoved me in. Before I knew it, we’d left my gentrified southeast Milwaukee neighborhood of Bay View and were on I-43 en route to—I didn’t know. We finally stopped at Midget Food, a tiny bodega in Riverwest—the portal of segregation in Wisconsin’s largest, most divided city—to buy a six pack of Schlitz, a 9.2 percent ABV local beer called O-Gii, and (for some reason) a tin of Vienna sausages.

We took our beer and meat-ish bounty to the nearby home of bassist Dug Belan (where Crappy Dracula also practices and records). Whe found him doing a jigsaw puzzle, watching Spice World, and drinking High Life mixed with orange juice. With apologies to Taco John’s, this would be the site of the on-record oddity of the charismatic Milwaukee act—a conversation that would touch on Cannibal Corpse, carburetor problems in Carbondale, seeing a guy have a stroke in Birmingham, and the greater spirit of man.

Tyler: What are some bands you don’t sound like? This will maybe wrangle in readers in a backwards way.

Tyler: But of those, which do you sound the least-least like?

Justin: The least-least like? We speak Spanish in one song, so probably Tito Puente. That’s the person we sound the most like of that group of people we don’t sound like at all.

Justin: We can tell you about the next album. It’s a double concept album. Dug doesn’t want to do vinyl because nobody buys any of our records, ever. We’ll get one weird person in Ohio.

Dug: We get an order once a month. Our Q4 (fourth quarter) numbers are way down for this year, as opposed to last year.

Justin: But this year we did sell a thousand records.

Dug: Between the six releases we’ve ever had, we’ve sold a thousand total.

Justin: One thousand. But Q4, we’re fucked. We’re totally fucked financially. From the business end, Crappy Dracula Inc… I mean, how many meetings have we had?

Tyler: What do you think is the reason for that? Do you think you’re lacking musically? Lack of touring? Didn’t you go out East this year on a tour?

Justin: We played the Southeast. We’d never done one in the South. It was rewarding. It was also fiscally disastrous. But because we’re how old we are and we have jobs, it didn’t matter.

Dug: It was just a cheap vacation—although the transmission went out and we had to spend four days in Carbondale (in Southern Illinois) and we almost didn’t make it home.

Tyler: I might be wrong, but isn’t that a dead city after industry left?

Justin: Not as dead as Birmingham, but yes, pretty dead.

Tyler: So Birmingham, Carbondale, and transmission issues. Any other highlights from the tour? Low-lights?

Dug: We played with a band called Sweater Meat, and they were a lot of fun. I’m actually still pen pals with the singer lady.

Justin: Louisville was a cool city. We’d never played that part of the country before. Athens was cool…

Justin: Both. Athens, Georgia then Athens, Greece. Then, while we were there, we played Georgia the country [laughs]… We saw a guy maybe die at his daughter’s wedding in Birmingham.

Dug: That was not exactly a highlight.

Justin: Walking around Birmingham, there’s nothing at all. It’s like an episode of the Twilight Zone.

Justin: That he’d poured onto the sidewalk to warm them, we can only assume.

Justin: Yeah, there were a number of things we’d heard you could do there, but we were convinced it was all a ruse. Apparently, there’s a huge food scene there—all kinds of chefs making rich pork belly things. We walked around quite a bit and didn’t see any of that. We went to a moderately priced Indian restaurant that was actually kind of good.

Tyler: But back to the death…

Justin: We were walking around and saw nothing. There were confederate flags places and it was just kind of alienating, you know? On this corner, there was a wedding party. This couple comes out the door, the woman in her wedding dress and the guy all gussied up. They walk out and they’re smiling and all young and fresh-faced. The wedding couple is a little ahead of us and the wedding party is super close to us. We’re walking right behind them.

The patriarch of this group—that we can only assume was the father—started walking really strange and we didn’t know if he was handicapped or just really fucked up from the party. Then he was clearly in physical distress. One side of his body wasn’t working, and everyone was like [high-pitched squeal] “Oh my god!” The wedding couple runs back. The bride is stone-faced and the groom is calling the paramedics. We kept walking and went past an Italian restaurant that was set up for them to go to, people were waiting—and that dinner ain’t going to happen. The weirdest thing is that when we retold this whole story to begin our set at the biker bar we played at later, it didn’t get a lot of laughs. It seemed like everybody in Birmingham just agreed, like, “Yep! He’s lucky!” Nobody said that, but you kind of got the vibe.

Tyler: So the guy died? Do you know for sure?

Dug: I don’t think so, because I checked the Birmingham paper’s website and there wasn’t a story about it.

Tyler: You’d mentioned before this that you’d both advertised in and been covered by Razorcake. 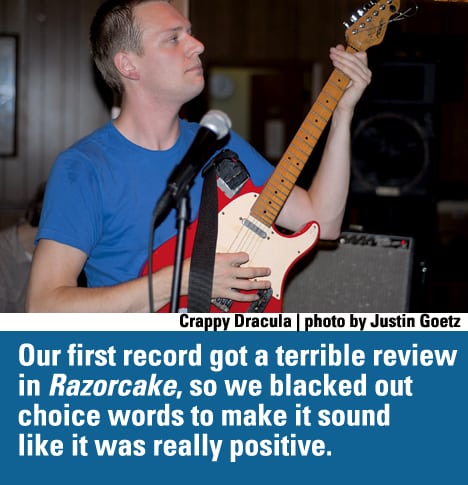 Dug: Yeah, our first record got a terrible review in Razorcake, so we blacked out choice words to make it sound like it was really positive.

Justin: We redacted parts of their own review, then put another ad in the next month that had that review in it.

Dug: Funny thing, the last line of that review—after we redacted it—was “I laugh at … Weekend at Bernie’s.”

Tyler: Another movie reference! My favorite Crappy Dracula song references Ghost Dad and Three Men and a Baby. What role does American cinema play in your songwriting? 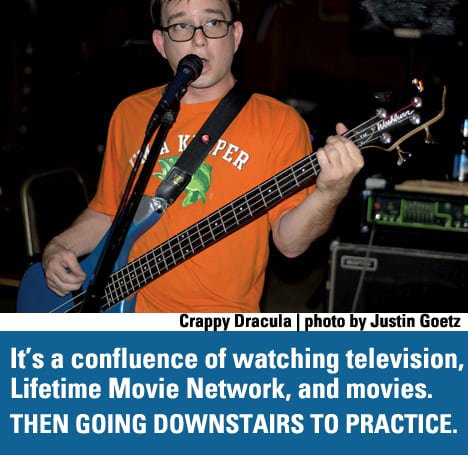 Justin: Maybe it’s a confluence of watching television, Lifetime Movie Network, and movies. Then going downstairs to practice. That’s probably why that trickles in. But I think there’s a deeper meaning, like, clearly, Three Men and a Baby is about mythology—the entire film, as well as our song “Myth Man,” which features Three Men and a Baby and Ghost Dad references. They’re both about iconography and the greater spirit of man. That whole album (The Computer That Learned to Watch Television) is all about TV though.

Tyler: So you go from a technology concept album—now you’re onto the next theme?

Justin: Yeah, the next one is going to be a double concept album.

Justin: The B-side is Crappy Dracula’s Tribute to America, USA. It’s all about this great country we live in.

Dug: I do love to brag, and I’m proud to say that I’ve visited all fifty states in the country.

Tyler: Speaking of states—smooth transition—some of you are from other states. Justin, you’re from Rochester, New York, right?

Justin: Fuck no! I grew up in a town called Dunkirk (New York). You may have heard of it, if you’ve heard of unemployment. Then I moved to Buffalo.

Tyler: What’s the music scene like there compared to here in Milwaukee?

Tyler: The only band I know from there is Cannibal Corpse.

Justin: Yeah, they live in Florida now, but they originated in Buffalo. There was a great era of death metal, but there was this great cross-section of music, because—not unlike here—it’s a blue-collar town. It was the tenth largest city at the turn of the 20th century, then they shot McKinley and missed the field goal and nobody cares about them any more. I grew up there in the mid-‘90s and there was a lot of crusty hardcore music. There was a really good powerviolence band called Project Grizzly and a really good melodic band called Abusing The Word. Snapcase is from Buffalo.

Tyler: And Dug, where are you from originally?

Dug: I’m from Waukesha and it’s terrible there. I grew up hanging out with Davey von Bohlen from The Promise Ring.

Justin: Dug was in The Promise Ring for three months.

Dug: Well, I went on tour with them when they played two shows and recorded a song, then the van caught on fire. They actually flipped their van on another tour and their bass player broke his arm right before they threw him out of the band.

Dug: His name was Tim Burton, actually. Honest and truly.

Tyler: I’m not sure if readers give a shit about what it was like to tour with a second-wave emo band, but what was the experience like on the road?

Dug: It was great. They’re all nice guys. Scott Beschta was still in the band and he was later diagnosed as schizophrenic—just a hot head. It was kind of fun to see him freak out a couple times.

Tyler: As kind of a funny band, do other bands like you? 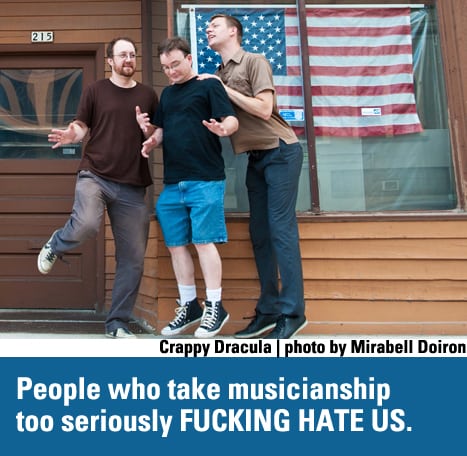 Justin: People who take musicianship too seriously fucking hate us. It’s not to say that they’re not correct in terms of us not being musically talented. It’s that same stupid idea that everyone who’s in a band immediately equates with being talented is bullshit. Any other modern art form can expand and be other things, but with music, people expect you to be “good”—whatever that means.

Tyler: I feel like it’s a double feature in that there’s a lot of humor involved with the music.

Tyler: To have a microphone and people in a room who are unwitting about what they’re about to hear?

Dug: Yeah. Comedians latch on to what we do more than other bands.