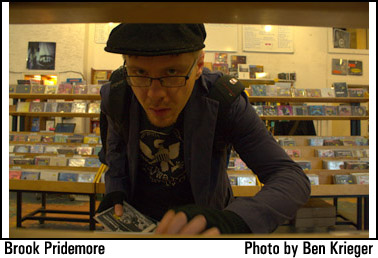 Interview with Brook Pridemore: The Kids In This Town Are the Greatest: Interview by Ben Krieger

On the wall of his bedroom, Brook Pridemore has hung a picture of himself standing on a rock with his ukulele in hand, somewhere along the Rhode Island shoreline. The photo was taken on one of the happiest days in his life. It all started with a fan Pridemore had met after one of his shows. The fan was affected by the music and the musician, so much so that he’d emailed Pridemore two years later with an unusual request: could the songwriter be present to perform when the young man proposed to his fiancée? The request was granted, and on that happy day Pridemore walked away with the photograph and new song that had been written on the spot, “Just Like Nathan Hale, Part 1.”

The story is a testament to what this musician has taken from the concept of punk, namely a desire to write music that connects with his audience, to play gigs that foster relationships with his fans, and to go the extra mile. Or thousands of miles. Pridemore is one of the many young musicians who has embraced the work ethic that was championed by the DIY hardcore/indie bands of the ‘80s and treats touring like a job. Based in New York City since 2003, he has embarked on nineteen tours, many of them stretching for months at a time and covering the entire United States. He is known for sending road tales in to local fanzines. Musicians whom he befriends on the road can sometimes be heard performing with local NYC acts at the Brooklyn Tea Party, a semi-monthly concert that he and his roommates hold in their loft.

The first thing that one notices about Pridemore’s songs are the words. If he’s singing a ballad like “Endlessly,” you’ll pick up most of the dense imagery on the first pass. If he’s blazing away on a number like, “The Buckeye State and Russell,” then everything seems to hit the listener and once and a few spins are necessary to pick out ever lyrical nugget. One never gets a sense like Pridemore is intentionally difficult; his articulation is never less than clear. He simply has a lot to say and doesn’t want to waste space with a lot of repeated refrains.

Earnestness is omnipresent, but there’s a lot of wit as well. A good example is when Pridemore uses his record collector’s sense of humor to acknowledge the kinship between the final refrain of “Just Like Nathan Hale, Part 2” and a Neil Young composition with a shout of “Marlon Brando!” The stories are never impenetrably personal; even on a record like 2009’s A Brighter Light, which Pridemore cites as being largely “chest-baring,” the songs always find a way of pulling the listener in.

If the words are aimed at the heart, the music is aimed at the dance floor. If Pridemore’s compositions rarely resemble the ska that he grew up on, they reflect the same desire to see people moving their bodies. As a solo performer, he pushes his acoustic guitar to the limit, strumming with ferocious intensity, and maintaining a healthy amount of stage animation throughout his set (if there’s a nearby chair or amp to stand on, he’ll take advantage). Face-to-face up with his band, the Valley Clubs, booty shaking is unavoidable. Pridemore’s melodies carry half the weight, often augmenting a simple chord progression into something a bit more special. He also makes excellent use of the fret board and capo; an average set or record consciously includes performances in a wide variety of keys. The recordings betray Pridemore’s love for a great sounding record. The frantic intensity of his projects coupled with the well-recorded drums confirms the presence of Double Nickels on the Dime and Tommy sitting side-by-side on his shelf.

It’s easy to get Pridemore talking at length about music, and one of his favorite subjects is touring. “To get out to a place that you thought was going to be a bust,” exclaims Pridemore, “like Minot, North Dakota, incredibly remote cities where the kids are willing to drive six hours ‘cause Bouncing Souls are playing in the next big city, to see what those kids do for fun. And you live in New York and think we have it made. Most of the time, that’s probably true, but as far as actually fun goes, we don’t see the kind of fun that these people have in New York because we have too many options. You go to a small down like Moscow, Idaho, where they have about five shows a year, and every time people freak out. People just go apeshit, the feeling that you get when things all come together just right. That’s the most inspiring thing that I see on the road.”

Pridemore’s desire to reach fans who are willing to meet him halfway with their longing to rock out is also reflected in the way he promotes himself; he isn’t willing to settle for just any tactic. Pridemore avoids promotional avenues that he feels lack legitimacy, preferring methods that could lead to stronger relationships between him and new fans: a house concert is preferable a large festival, a fanzine preferable to Pitchfork. “Every year there are a slew of new bands that are hyped,” explains Pridemore, “In 2007 there was a band called Black Kids, and where were they in 2008? They were nowhere because everyone who bought the record found out it was fucking bullshit. So I’d rather just make good records and have people found out about the music on their own than have it be fake—like CMJ.”

Ben: Where does the whole Minutemen/Fugazi /DIY approach fall into the timeline of your music career?

Brook: I don’t have a lot of kinship with the records that a lot of people grew up on. I grew up on punk/ska, which is not punk rock in anyway and is crassly commercial. The stuff that spoke to me—the first five They Might Be Giants records, the Violent Femmes—after I heard them I was like, “Okay, nerds can make music.” At fourteen, I heard the Dead Milkmen and realized that not only could nerds make music, but nerds could be a threat to the jocks. I don’t know what other schools are like, but that was the cool thing to be in my school: captain of the football team. It wasn’t until about five years ago that I got into punk bands like the Minutemen, Hüsker Dü, Black Flag, and Mission Of Burma. I recorded what would be my second album in 2004 (First Name/Last Name). I must have thought I was a total punk rocker back then, and, literally days afterwards, I went to see a Mission Of Burma show. I also read that very good book by Michael Azerrad, Our Band Could Be Your Life, and started checking all these bands that I had always heard of but never listened to, so I went through sort of a renaissance at twenty-five.

Ben: Tell me a bit about your relationship with Crafty Records. How did that come about?

Brook: I met Dan (Crafty Records owner) on—oh shit, I even know the date—June 4, 2003. I invited him to this show at the Bowery Poetry club. It was probably the most prestigious show that I had played to date, at least in my mind. I was really excited and invited everybody I knew. I was opening for King Missile. I brought thirty people in a torrential rainstorm. Within my first song Dan decided that he had seen something in my performance that he wanted to work with, something that was raw, something that he could temper. The only dream I had when I moved here was to, within seven years, be on a label and be playing my music. To have done that within the first year. I feel absolutely at home.

Ben: What are the advantages of being on a label?

Brook: Dan has a van. He invested in my interests upfront. Now we’re both profiting from any CDs that go out. And it’s 50/50. I don’t know any artist on any label that gets fifty percent of every CD sold. Ani DiFranco, maybe, because she runs it herself.

Ben: So you’re touring, you’re on a label—that’s what you set out here to do and now you have it. Now what?

Current and future Brook Pridemore completists are encouraged to visit the Crafty Records website (http://www.craftyrecords.net/), where all of the songwriter’s solo CDs can be purchased individually or as a box set. Web surfers should be able to find his active website (currently http://www.myspace.com/brookpridemore) for the latest tour information. With some additional searching, they may also discover numerous articles that Pridemore has written for various music publications, covering a diverse range of topics from Pere Ubu to Christina Aguilera with equal sophistication and enthusiasm.