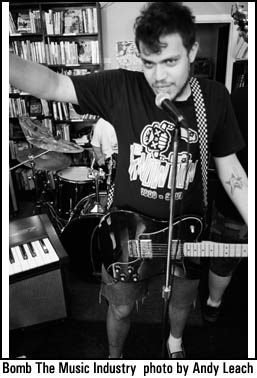 Interview With Bomb The Music Industry: By Bryan Ohio

It seems only a few years ago that ska music was a foreign cultural phenomenon that nobody would admit knowledge of, let alone have love for. Bomb The Music Industry has helped make it acceptable to listen to punk rock with horns again, but don’t start the fourth wave jokes yet. BTMI isn’t exactly a ska band. From their DIY approach to making t-shirts to booking all of their own tours, Bomb has a lot more in common with Fugazi than Reel Big Fish. I got the chance to speak with front man Jeff Rosenstock recently about a plethora of things some of you will care about and some of you won’t. Whatever, form your own opinions.

“So when you write the opening paragraph for this article, could you say that I would like to say that I don't only get my political information from Perez Hilton? That would be crazy.” –Jeff 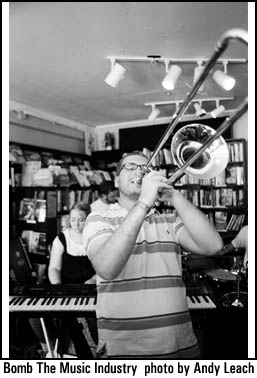 Bryan: Do you ever see a time when you will sell merch on tour?
Jeff: We’re selling vinyl and CD’s now. That’s still really weird and I don’t know how I feel about it. It’s nice though because mp3s really suck but CD and vinyl sound really good. We’re never really pushy about it. People have the choice if they want to pay for something that sounds a little bit better for money or not. As far as shirts go, we’re going to spray paint them until we can’t do that anymore. Then I guess we’ll reassess our situation. I don’t really see us growing so popular that we won’t be able to do that so, lucky us!
Bryan: What do you think of the idea of a band as a product? The mass marketing of Paramore for example.
Jeff: It’s weird. I know quite a bit about Paramore, but I’ve never heard any of their songs. I try to avoid Paramore every second of my life. Yet, I still know who they are, what they look like and shit. I was watching something on MTV and the interstitials between each episode were like Boys Like Girls eating condoms out of an ice cream truck. I was thinking, wait a second, is this a band? Aren’t they supposed to play music or something? I just don’t get it and it doesn’t affect where we’re coming from. I know, as far as the record label Quote Unquote goes, that I have really good bands that I want people to hear. It’s this line between good honest publicity and shoving something down peoples throats. Hopefully eventually people will be smart enough to make their decisions themselves and not devote their lives to those type of bands. It’s not necessarily Paramore, I’m sure they’re all nice people, but when you’re a band not because of your music you’re kind of missing the point. Those bands are not going to be the next fucking Phil Collins.
Bryan: Yeah, they’re not going to be the next Genesis! There are some artists who are able to sell albums but still retain their dignity.
Jeff: Yeah, you know. Genesis has greatest hits records. Fucking Will Smith has greatest hits records. They made music for like 15 years and people are still interested. I think when it’s just marketed as a product, people are going to lose their interest in it just as quickly. I guess I feel bad for those bands. They probably feel bad for me because I’m broke so I guess we’re even.
Bryan: What about mainstream magazines? For awhile you wouldn’t do interviews?
Jeff: Oh! We never wouldn’t do interviews, nobody would talk to us! Nobody had any interest in us. Scott, the music editor at AP likes us a lot. We’ve been very fucking fortunate that magazines have wanted to write about us. I think it’s great to have a public discussion about this stuff. It’s just been us booking the shows for years now. It’s cool seeing that people are interested in us enough to give us space in their magazines. Maybe somebody will read a Bomb The Music Industry interview or a review of an album on Quote Unquote and think, wait, you can do things differently. Fucking major magazines, whatever. They can write about whatever they want. You don’t have to read them. I think that essentially all music magazines are trying to put forth one opinion. Whether that opinion is saying you should find yourself and shit or trying to tell you that beards are cool, it seems like magazines are kind of singular, so I don’t think it’s fair to knock a mainstream magazine for that. Independent magazines are giving you the same shit. Basically, I miss Punk Planet.
Bryan: For sure. That was my favorite magazine for the longest time. It was so sad to see them go. On the topic of surviving as an independent, as the first All Donations based Digital label, how does Quote Unquote Records do financially? Do you think physical recordings are dead?
Jeff: Well, I think the thing with Quote Unquote is we don’t spend much money. We don’t do advertising. It’s pretty much a word of mouth, grassroots thing. I think it was trying to be honest about putting records out on the internet. It’s so overblown so this was like, hey these are records some of our friends made that I think are good. The donations that come in are not huge, but since we don’t spend that much money they pile up. We can spend a couple hundred bucks for a band to go into the studio when we need to. Our friend Joel, who recorded the latest Bomb The Music Industry record, has always been very fair about the prices of our bands to record because he really supports the idea. I guess it’s a mixture of those things that make it work out as the little community we’ve got here. We probably have about 1300 bucks in the account that we’re holding on to until we find a good reason to spend that money.
Bryan: Do people very often donate more than the $5 suggested price for the albums?
Jeff: Most people donate more than the suggested donation. Especially, Bomb the Music Industry has gotten some crazy sized donations since we have so many albums up there. It’s cool because that money actually goes back into building something. They help make Quote Unquote better. Not bigger in a bad way but bigger in a way where more people will know about it and maybe, shit. Do it themselves too. 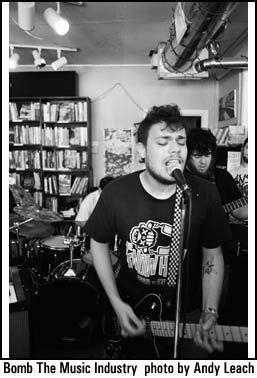 Bryan: What are some of the releases that you’re most excited about right now?
Jeff: Well, it may be kind of weird since I’m sitting right next to him, but I’m really excited about the Cheeky EP (Choke on a Cheeseburger). It’s really, really fucking good. I’m psyched because I think it sounds good. That record is six songs that are all good. I think that may be the first time with one of our releases, so I’m stoked about that. I’m excited about all of the bands. I thought the new Matt Kurz record (Impending Doom Is No Excuse) was awesome and The Riot Before record (So Long, The Lighthouse). Really good, people liked that one and Pegasuses XL (The Antiphon) is always a lot of fun. We’re about to put out this Laura Stevenson record, which will be the first really acoustic thing we’ve done. That should be interesting to mix that kind of energy with the punk rock on our label.
Bryan: You guys are really developing a diverse mix of bands.
Jeff: It’s funny because we really still don’t have a ska band on Quote Unquote Records. Just because we’re always waiting on the right people to do it with. So many of our friends are musicians. The Riot Before are a really good punk rock band to play basement shows with and Cheeky, for lack of better terms, were a really good way to bring a female element into Quote Unquote Records. I thought they were the right band to do it. Rick Johnson makes some really good electronic ipod music and Matt Kurz does a great job as a one man band with his bluesy rock and roll tunes. He’s a really good songwriter. I listen to a lot of music, but I try to keep the bands on the label as the best bands I listen to and am fortunate enough to be friends with.
Bryan: Let’s switch gears over to politics.
Jeff: Okay, you switch those gears; let’s go into politics. I’m really uneducated on all of this by the way. I just want to confess this to any kid who’s reading this trying to find a good opinion and good facts. Everything I know is hearsay from what my girlfriend tells me from Perez Hilton. It’s shitty, it’s like a copy of a copy of a copy until it turns into a piece of shit in a Xerox machine. I like how you’re saying things that make it sound like I know what I’m talking about. I just want to stress again that I have my own opinions and they’re probably misinformed, that’s all I’m saying. But they’re misinformed in a different way than most.
Bryan: We’re obviously in the same boat with not being able to afford health care.
Jeff: Yeah.
Bryan: For the few months I did have insurance, I felt like I was being scammed. Every time I went to the doctor, it was like that doctor was trying to send me to another doctor or to some lab, then back to the first doctor who sees nothing wrong and wants you to see more doctors while paying a fee every time. How do you feel about the current state of healthcare in America?
Jeff: I don’t really know. I don’t have health insurance. I know that if I get sick I’m pretty much fucked. If I start getting seriously sick, my mom will go to the doctor and pretend that she’s sick like I’m sick so she can use her $2 copay. Isn’t that nice of my mom to do? But that doesn’t seem like the way people should be getting medical attention. That sets off a little alarm in my head that something’s wrong when my mom has to go to the doctor for me because I don’t have an insurance card. I had a job where after like 3 months you could get health care. I left right before but had made a decision to not get health care. It’s really expensive and you don’t really get much. The options they gave us were really shitty and expensive. You’re always so fucked. Whatever though, that’s health care, I guess people just need to stay healthy. Fuck it, right? 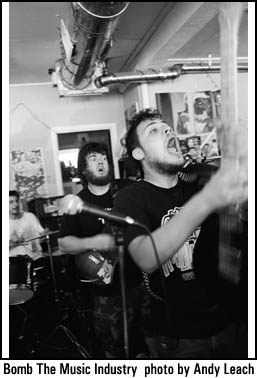