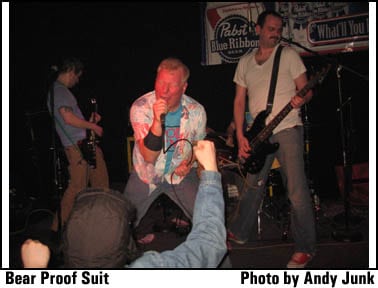 BASS! How low can you go? Pretty damn low when you're rollin' with Milwaukee's Best: Bear Proof Suit. In this candid interview conducted by Kevin DeBroux of Pink Reason and exclusive to Razorcake.org, the boys in the band step out from behind the curtain to deal the real on their hometown's scorching nightlife scene, close encounters with glitterati outside of Walgreen's and their own personal battles with addiction and the harsh choices they've had to make on their way to the top. Or the middle. Or, at the very least, the top of the middle. The sensitive, bearded souls typical of Razorcake's readership should prepare to engage hankies in three, two, one...

The full interview is featured in Razorcake #44, which can be found here-
/catalog/index.php?main_page=product_info&cPath=2&products_id=412