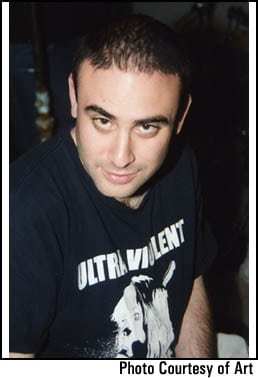 Lauren: Art; you wrote reviews for Punk Planet for eight years, until it went under. How did you arrive at the decision to start contributing to Razorcake, and how did you feel about making the switch?

Art: I didn’t fully realize how much I liked reviewing for Punk Planet until the day it went under. When I got the news, I felt sick to my stomach. It was almost embarrassing. A former Punk Planet reviewer, Newtim, knew how hard I was taking PP’s demise and suggested that I talk to Todd about Razorcake. As sad as I was to see PP go, Razorcake fits my sensibilities much better.

Lauren: Your name is always all over the review section of Razorcake. Do you ever think about branching out and doing some interviews as well?

Art: I’m spread pretty thin right now and don’t plan on doing any music writing besides reviews for the time being. But I actually did one interview for Razorcake already, way back in Razorcake #17. It was an interview with ANTiSEEN that I originally wrote for Punk Planet. When it ended up severely truncated by the folks at PP, Razorcake printed the rest of the piece. Razorcake was great to work with and I was really happy with how it came out. I think that most of the other bands I’d consider interviewing are far less interesting than ANTiSEEN and are probably too ridiculous for people to want to read about.

Lauren: Is there a pretty strong punk scene in Pittsburgh or do you have to make the trip out to “ThrashCity” Philadelphia to see all the really good shows?

Art: Pittsburgh has a really big punk scene, with a lot of kick-ass local bands and tons of touring bands coming through. I’m more likely to go to nearby Cleveland than Philly to see bands that skip Pittsburgh, but I do make the occasional trek across the state to Philly if something really extraordinary is going on. The last show I drove to Philly for was an Underground Railroad to Candyland/Killer Dreamer show.

Lauren: Does the band you’re in play a lot of shows in your hometown?

Art: My band, Bippy, is based in the Cleveland area. We only play a couple of times a year since the members are scattered across the country, but I’m fortunate that we’re a band that hasn’t been forgotten. We hit our peak just before the Internet totally exploded, so there are way fewer references to us online than there are to other similarly popular bands of today. We sold thousands of records, toured, and played a ton of amazing shows. I don’t want my old band to become to my life what high school football was to Al Bundy on Married with Children, but I do tend to get a folksy “glory days” tone when I talk about Bippy. Playing a killer show is an unmatchable experience.

Lauren: Tell me about the film magazines that you write for. What aspects of cinema are most interesting to you?

Art: The main film magazine I’m involved with is Ultra Violent, which covers horror and exploitation cinema from around the world. I didn’t start the magazine and was already a reader of it when I started writing for it in 2001. I became its managing editor in 2004, which is something of a dream come true. I’m very, very proud of Ultra Violent. Our specialty is our in-depth, lengthy interviews. Despite its often extreme content, Ultra Violent does well wherever it is sold, even in chain stores like Borders that are surprisingly cool about disregarding customer/parental complaints. I’m primarily interested in confrontational cinema, but I enjoy all types of movies. Horror and exploitation films tend to have a subversive quality to them that isn’t as common in other genres.

Lauren: Ever been to a film festival?

Art: I’ve been to quite a few film festivals. The best part of a film festival is seeing a new film play in 35mm that you might never get the chance to see otherwise. More and more film festivals are allowing video projections of films which might seem like a positive, populist approach at first blush. But I really can’t get excited about watching a DVD in a movie theater. I want to see filmwhen I go to a film festival.

Lauren: How do you feel about the mainstream movies that come out in theaters? What genres are faring well and what genres seem to keep recycling the same plotlines over and over?

Art: As a horror fan, I don’t really look for originality per se in what I watch. Most of the great, classic genre films have plots that can be described in a sentence or two. What makes a good movie has more to do with how a plotline is executed. I tend to enjoy most of what I see in theaters. I go to the movies a lot and am not a film snob in any way. I do tend to gravitate towards art house fare and documentaries when I see movies theatrically, but Hollywood is good at what it does. Besides lame FX-laden works, most of what plays in theaters is at least watchable. Hollywood is particularly good with comedy. The recent teen comedy Sex Driveis one of the funniest movies I’ve seen in ages, for example.

Lauren: You work as a Public Defender, so tell me how realistically television dramas portray your job. What’s your favorite legal drama on TV?

Art: I try not to watch courtroom dramas on TV, but the new show Raising the Bar portrays public defenders far more realistically than any other show I’ve seen. It was co-created by a former public defender, which helps. Plus, I look just like Mark-Paul Gosselaar (of Saved by the Bell fame), who plays the lead public defender character. Okay, so maybe I’m ugly and don’t look anything like him. It’s still a relatively accurate portrayal of what we do.

Lauren: How did you decide that you wanted to be a Public Defender? Did it turn out to be worth going to LawSchool for?

Art: I have radical views regarding crime and punishment. I was politicized during the despicable incarceration boom of the 1980s and 1990s and I saw a lot of people that I cared about get fucked over by the criminal justice system. I knew going in that I would likely become a public defender. I love my job, so I have to say that it was worth going to law school for. Education is a touchy subject, though.

Lauren: Do you have any ambition to be a Judge or to work for a private firm?

Art: I don’t believe in punishment, so I don’t think I could ever be a judge. It would be impossible for me to sentence someone to any term of incarceration in the system as it stands right now. Likewise, I have no aspirations to work for a private firm.

Lauren: When you tell people that you’re a lawyer, do they cross their fingers at you like they’re trying to ward off evil? Do they ask you for legal advice at socially inappropriate times?

Art: I like the image of the finger cross! I’ve definitely had people ask for legal advice at odd times, which can lead to pretty awkward situations. I get mixed reactions regarding the fact that I’m a lawyer. Most people hate lawyers, and who can blame them? I don’t like most of the attorneys I meet either. I don’t typically introduce myself as a lawyer and instead cut to the chase and tell people specifically that I am a public defender. Sometimes I encounter racist, right-wing bozos that want to know how I can stand representing the “scum of the earth.” Then again, sometimes I meet PC liberal bozos that want to know how I can stand representing people accused of rape. Luckily, most of the people I surround myself with “get” what I do and respect it.

Band you’d never heard of until reviewing their record:

Format for listening to music:

Thing to do with friends: