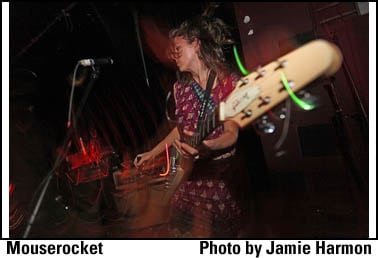 Memphian Alicja Trout is committed to rock’n’roll. Over the past fifteen years, she has run a label and mailorder (Contaminated), played in some great bands (Lost Sounds, Clears, River City Tanlines), created cover art for records (The Clears’ self-titled LP), recorded groups (The Reigning Sound) and booked shows (Electric Rat).
But it’s Alicja’s quality control that makes her output so impressive. Alicja seemingly has the Midas touch coupled with a Billy Childish-like work ethic. With an indefatigable spirit and belief in herself—two attributes necessary for creating music on the margins—Alicja continues to impress and inspire. Now a mother, Trout appears to be as busy as ever. (We had to move our interview up a day because she had to record a band on the originally scheduled date.) Alicja’s currently finishing up a River City Tanlines record and working on solo material for her Alicja-Pop and Black Sunday projects.

(Note: The following is comprised of unused excerpts from an Alicja Trout interview scheduled to run in issue #50 of Roctober.)

Ryan: The first Lost Sounds single came out on an Italian label (Solid Sex Lovie Doll). Back in the early 2000s, a lot of European labels were releasing records by Memphis bands before their American counterparts picked up on them.
Alicja: Yeah. I think a lot of it had to do with what Eric (Friedl) was doing with Goner Records. He got an international thing going. Eric released a Guitar Wolf LP (1993’s Wolf Rock!), which might have been the label’s first full-length release. He released some Oblivians singles right around the same time. There was something about Eric—maybe being on the phone or writing letters—he was making contacts with people where they hadn’t been made before.
Ryan: With all the Goner Fests and the label’s releases and storefront, Goner has become such a focal point for bands and fans of punk and garage rock.
Alicja: Right. Goner probably brought the interest of the more obscure countries and record labels to Memphis and its music scene.
Ryan: In the late ‘90s you were playing in Mouserocket and had started The Lost Sounds. Can you work out that timeline for me?
Alicja: The Clears (Alicja’s first band) lasted about a year. We were around in ‘97 and ‘98. I liked the music we were playing. Others did too. But it really wasn’t what I wanted to be doing. I was into the more rock’n’roll bands.
Ryan: Less Kraftwerk.
Alicja: I wasn’t into Kraftwerk. I only found out about that stuff (krautrock) because everyone kept referencing our band to it. The look that we came up with for The Clears was really us being silly and dressing up robotic. We’d go into the hootchie momma stores in the mall and buy shiny plastic clothes off the close-out racks. We really weren’t trying to imitate Kraftwerk or Devo. One of the guys in the band just happened to have a ton of analog keyboards. We were a pop band that made recordings on a 4-track recorder.
I met Jay (Reatard) when he started The Reatards. He was about fifteen or sixteen years old. He was out and about town. I’d catch The Reatards. Jay and I became acquaintances. I was ten years older than Jay; he was younger than everybody else. I can’t remember exactly how The Lost Sounds formed, but when we finally did (1999), Jay and I had become friends. Jay played briefly in a band I had with one girl called Ultracats (1997) and we added him and a bass player in ‘98.We were doing sort of what the Detroit Cobras were doing, without knowing who the Detroit Cobras were. [laughs] We covered old songs—kind of gave them The Ramones treatment.
Jay went on a European tour with The Reatards and came back with a sliced arm and all of these battle scars. I think he opened up for The Persuaders. It’s funny looking back on it. We kicked him out of Ultracats because he was being so pissy about everything. When I told him he was out, he said, “Well, I was going to quit The Reatards to play in Ultracats.” Somewhere along the way we decided we’d form our own band with our own sound. We had a really funny-sounding keyboard called a Roland Strings. It sounded like a really bad version of a church organ. We played that keyboard on our first 7”. The Lost Sounds started without us having any sort of plan. Jay was a little bit scared of not sounding safe and conventional. The Lost Sounds didn’t sound like garage rock or ‘70s punk rock. Eventually, Jay got into keyboards because he loved The Screamers. Ryan (Wong), his friend from Arizona, made him a tape of The Screamers and the Red Snerts stuff. Ryan got him into the raw-sounding, keyboard-driven bands. The Units and stuff like that. He became comfortable with the sound we’d eventually develop with The Lost Sounds through discovering those bands.
Ryan: You mentioned a lot of Memphis bands dying on the vine because they never leave the city or get the proper exposure they deserve. With that in mind, one of the short-lived groups you were in was the CC Riders (along with James Arthur, Jay Reatard and Jeffrey Evans). 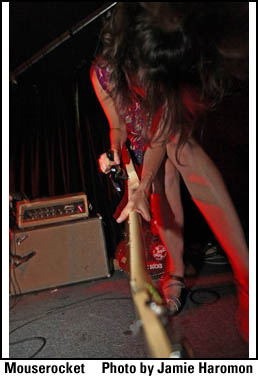 (For more information on Alicja Trout, check out Miss Erika’s interview with Alicja in Razorcake #29 and Trout’s blog: http://alicjatrout.blogspot.com/)