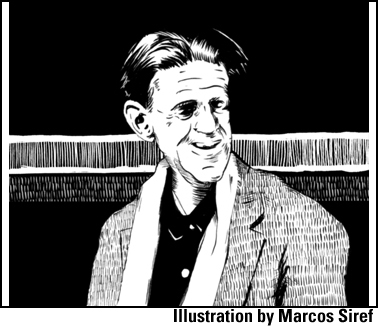 Interview with Alex Cox: Director of Repo Man, Sid & Nancy, and many more. By Billups Allen

It might be uncool to admit it, but certain life-changing bands became known to me through the movies. Both the Circle Jerks and X-Ray Spex are bands that were first introduced to me through the films of Alex Cox, a British filmmaker who had his pulse on the punk and hardcore scene long before it had any Hollywood cachet. But besides having good taste in music, Cox produced films with an atmosphere of anarchy that spills out of the screen. With little regard for the studios, and sometimes without the aid of logical discourse, Cox fashioned a labyrinth of irreverent humor and wild plot lines in his films. His classic RepoMan presents the lifestyle of Los Angeles punks through an absurdist perspective that defies genre. His controversial biopic Sid and Nancy has divided critics and Sex Pistols fans consistently since its release in 1986. Cox has taken chances that few directors would. We spoke to Mr. Cox after a series of appearances promoting the reissue of his shoot-‘em-up classic Straight to Hell which stars Joe Strummer, a Cox regular, and the recent publication of his book 10,000 Ways to Die: A Director’s Take on the Spaghetti Western.

Billups: Did films hold any special place for you when you were young?
Alex Cox: I never planned to get into it.
Billups: I read that your degree is in law.
Alex Cox: I got my degree in law school. I can’t practice, but I went to law school for three years; went to film school in England and then film school at UCLA. It was cheap in those days to go to school.
Billups: Your films have such a deep connection with music. Did music inspire you early on, or do you feel you were inspired by the punk phenomenon as it was happening?
Alex Cox: Just being from Liverpool is a big musical influence. Think about all the bands that came from there, not just the Beatles. What else did we have besides popular culture? And the slave trade.
Billups: You’ve recently had a book published about spaghetti westerns. How was it going from being a fan to asserting yourself as an authority on the subject?
Alex Cox: I love spaghetti westerns. They used to actually be in theaters; back in the day. I actually did it because I had amassed this massive collection of VHS. I watched them all in chronological order so I could see how they developed.
Billups: Were there any observations that developed from that?
Alex Cox: I actually had thought that all spaghetti westerns from the ‘70s were rubbish and it’s not really true.  There are one or two good ones. One called California that was quite good.
Billups: I understand you spent some time as a repo man.
Alex Cox: I was a repo man. I used to get twenty-five dollars a car.
Billups: Did a lot of the philosophy in the film come from then?
Alex Cox: A lot of the dialogue was from then.
Billups:Repo Man is on a list of movies in my head that feel as if it would be difficult to have made in today’s studio climate. Was there a better climate in the ‘80s for an unusual film like Repo Man or was it a struggle?
Alex Cox: I think it was difficult back then as well. It only happened by sheer chance because Michael Nesmith (of The Monkees), the producer, was having drinks with some artist’s manager who had been called by Universal and said, “Michael, what do you want to do next?”—and they’re all dressed in cowboy lounge suits in this bar in L.A.—and say, “Michael, let’s do your movie… what’s that movie again?”
Billups: I got excited when I saw there was a movie called Repo Men.
Alex Cox: It was some worthless movie that the studio had on the shelf.
Billups: Do you think they released that movie to piggybank on Repo Man?
Alex Cox: Imagine the worst of all possible worlds. The absolute worst, bottom-feeding scum, and how they would operate, that would be how a studio works.
Billups: I’ve read Waldo’s Hawaiian Holiday and thought it was great. That was planned as a sequel. I know you’ve produced another sequel.
Alex Cox: Repo Chick, but it’s not really a sequel, it’s another story all together.
Billups: I can’t think of many movies during the time Sid and Nancy was released or before that pull from events so current to the production. Was there a reason you felt it was time to tell their story?
Alex Cox: I was trying to prevent Madonna and Rupert Everett from doing it. That was the plan of the studios at the time—to promote anything Madonna wanted to do.
Billups: I think the folly of a biopic is that people assume that it has to be one hundred percent accurate, as opposed to capturing the mood or feel for a time and the lives involved, but I always thought Sid and Nancy was among the better ones.
Alex Cox: What’s another one?
Billups: Tim Burton’s Ed Wood.
Alex Cox:  I don’t know; I never saw it. I’m not a fan of Ed Wood. I mean, I realize it’s camp, but it’s not something I’m into.
Billups: Any bad situation seems to attract conspiracy theorists. Have you ever heard from people who believe that someone else stabbed Nancy Spungen?
Alex Cox: Well, there are people who think that Sid didn’t kill Nancy. The way it was in the film at the time seemed to be credible, especially since they were in such a desperate  situation. Some people you talk to say that I was wrong. But, you can’t really investigate without an autopsy and no one but the family had access. Since they haven’t shared that autopsy, everything is just speculation. People say, “Aww, Rockets Redglare snuck in and stabbed her,” but there is no way of substantiating that assumption. The ChelseaHotel was not a secure environment at that time.
Billups: Is there something about Zander Schloss (of the Circle Jerks) that causes his characters to be so abused in your films?
Alex Cox: Early on. But he’s gotten bigger now, he’s like a bear.
Billups: After taking such a critical beating, was it at all satisfying to have The Criterion Collection release Walker?
Alex Cox: Criterion is just a brand. I’m happy whenever I’m recognized on an independent label. I like Louder Than Words. They don’t have any of my films, but they have Loose Change on DVD, which is extremely bold of them, and by far the most important DVD for anyone to watch. Ahead of anything on Criterion. Ahead of anything I’ve done.
Billups: Some of the extreme violence and surrealism in your work seems influenced by Monty Python as well?
Alex Cox: I think everybody is. All of England was influenced by Python. And also The Goons. English traditionalist surrealism.