Interview Podcast with The Street Eaters: By Todd Taylor and Adrian Chi

The Street Eaters are a two-piece, wife-and-husband band from Berkeley, California. They play loud, weird, hooky DIY punk. It’s arty enough to be exploring and punk enough to get to the point; they’re a refreshing balance/counterbalance of quick charges and expansive sonic landscapes.

You may know Megan March from Neverending Party,

Todd: So, John, how did you end up in the role of Apples in the movie Neptune?
John: Oh my god. Have you seen it?
Todd: I only saw previews of it. I never saw the movie.
Megan: It’s brutal.
John: It’s about an hour and a half of just relentless brutality. That was involved with a bunch of people from the Spam and Geek Fest collective, directed by Anthony Marchitiello. Really interesting guy. Interesting film. A post-apocalyptic survival thing. Doesn’t really get explicit about what happened. He focused on a small group of individuals. It’s more about human-as-animal kind of things. My character was probably the most sympathetic character in it, trying to be the most human, whereas everybody else was… I mean, he dies. Brutally. About half way through the movie because he’s trying to be more human than animal, but everybody else is kind of being an animal.
Megan: It’s hard not to feel sorry for a character that gets shoved down a huge ravine naked.
John: Oh yeah. That. And then dunked in a freezing creek shortly after having his face burned in a campfire. This was all live, too. There was no CGI fakery. Just pain.
Megan: Did you get sticks and splinters stuck in painful places?
John: I don’t even want to talk about it. It’s an interesting film. Hopefully, one day, it’ll actually see some sort of a broader release, at least DVD. He’s done a bunch of shorts. The film has got some sound issues, so we may have to Foley it some day, but who knows.
Todd: John, you mentioned the fourth wall. What’s that?
John: You mean the separation between the performer and audience?
Todd: Yeah, but I don’t know what the first three walls are.
John: Well, that’s around you, on the stage. Unless you want to go through the back of the stage.
Megan: Is this a Pink Floyd reference?
Todd: [serious robot voice] No.
[laughter]
John: You’re supposed to pretend—besides the stage walls and the stage separators—that there’s another curtain between you and the audience that you’re supposed to be separate from. I guess that’s what most people in the performing arts and thespian arts do. But most of the good punk bands and rock bands…
Megan: We hate that wall.
John: It’s to be despised.
Todd: I didn’t know if it was a political term. Because there’s the fifth column. I didn’t know if there was a fourth wall.
John: Where did you pull it from, because maybe I was double-meaning it?
Todd: Every time I’ve seen you with the Fleshies, there’s no fourth wall.
John: We try to smash it. We try to do it as much as possible, too, although we are a little more bound by instruments.
Todd: And you can really tonk people with your guitar.
John: I don’t want to hurt anybody.
Todd: That thing can slash.
Megan: You’ve gotten close, man.
John: I know. I’ve got to be careful. Being sober is a good way to avoid people with that.
Megan: I think we were also really encouraging of having the audience break down that wall, too, because we try and get people to be closer to us and more involved when we play. When people are standing closer and their faces are in dangerous places, of getting hit by drum sticks, I find that more exciting. I think they’re excited, too.
John: Excitedly bleeding.
Megan: Excitedly dangerous. 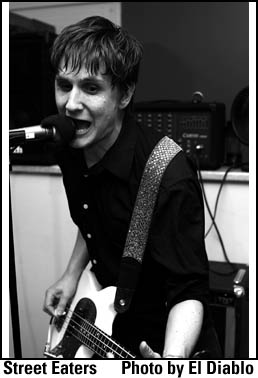