Indie Internet-Based Music Licensing: What the Hell It Is and How You Can Use It by Scooter Johnson

(Note: Razorcake does not vouch nor specifically endorse any of the links in this article, well, besides Google, which is fantastic. This article was graciously turned in by a first-time freelancer and it seems to us to be an interesting angle on what you can do with your music - even if your band broke up - if you want more people to hear your audio output.)

So you have a band, a CD, a practice space, a so-so van, a couple of gigs coming up, and an internet connection - what next? Convergence. It's a dirty word for corporations but a promising term for bands striving to go that extra mile for exposure and financial independence. The internet is proving itself to be beneficial to the newest bands and others who recognize that they have to reach far beyond the city limits to make a go of music as a career.

Your two immediate online needs are a URL or domain name that is representative of band, preferably

(After setting up a website, my first foray into online money-making was joining http://www.mp3.com>. It was relatively easy to upload our music but we're not making any money off it and haven't for over a year as the cost to be a "premium" member per month exceeded what we were making off plays. It was enough to put back into the band for expenses, posters, photocopying press kits, printer cartridges, postage, recording, gas money, and CD dubbing costs.)

Curious on how to market your site, join mailing lists, book a tour, contact an A&R rep and get the best deal on pressing CD? Check out many of the dozens of websites put together by your peers that contain many articles, links, resources and directory listings. (http://www.indie-music.com> is excellent.)

What you probably will not find is information on music licensing. Licensing? This is the term applied to the process of placing music on visual creative projects, such as film soundtracks (film, video, digital), television programs, and advertising campaigns.

As more and more music is being made available online for different uses, it is natural for production people to turn to the internet to find music. Why? Because you can buy anything on the internet! (Even armadillo handbags. See left. Click here to see I'm not joking.) Savvy bands are spending time on film bulletin boards offering up their music for soundtrack use, indie labels are offering licensing options on their websites, and composers are banding together and starting their own online write-for-hire agencies. If you or your bandmates don't have the time, effort, or expertise to find soundtrack opportunities and successfully pitch your music, there are avenues for you.

I'm on movie sets a lot and I can tell you how hard it is to approach the music supervisor or the producer with a CD. They may love it or I might lose my job. Not wanting to jeopardize my finances, I've found a few online companies that specialize in indie music licensing and are non-exclusive (which means you can join as many as you want - no exclusive memberships). Before signing with any company, remember you are entering into a business relationship that involves your work and payment for use of that work.

Contracts?
The licensing company should have a legal contract that requires the signatures of the owners or the authors/composers of the music sent in. If the company is legit they will want to protect themselves from fraud artists that will send in other people's music and profit from it. Also there is the final license contract with the filmmakers, or whomever, to peruse. For example, is it for a Master/Sync license? or just a Sync license? (http://www.ascap.com>, http://www.bmi.com> or http://www.socan.com> (Canada) can define these terms if you are not familiar with the industry jargon).

Fees?
The contract should also state very clearly the fees (monthly? yearly? by the byte?) involved and how future licensing income will be split between you and them and how often you will be paid.

Pre-Cleared or Restricted?
Also, ask about whether the tracks are required to be pre-cleared or if you can request restrictions.

Some companies have a standard restriction that reads something like, "This track cannot be used on scenes depicting racism, pornography, use of tobacco, alcohol or drugs." Requesting a restriction will obviously limit the amount of interest your music garners and, ultimately, the pay out. Personally, I don't care if a European sausage company wants to use my music on a television commercial. I'm an indie musician who can barely pay the rent. Who is going to blame me for taking the money? I'll take that money and invest it in my band's future.

Where to start?
Start where you begin all your other research - on your favorite search engine (http://www.google.com> is huge). If you want to go the total DIY, personal route based on your location, use your city name and keywords like "film production," "indie movies," "production companies," or "music wanted." Most cities and provinces have film associations and unions that keep track of local shoots and list them on their websites with contact information. Be prepared to be your own sales agent. You will have to send each of the interested parties a pitch package. (Some require two: one for the director and one for the music supervisor.) Diligently follow-up, negotiate your terms, and if needed, hire a lawyer to proof your contract.

If you are willing to let go of a lot of control, a full-service online licensing agency like Realia Music Inc. (http://www.realiamusic.com>) may be worth looking into. One of the larger agencies online, their online catalogue consists of indie music from around the world and it's pre-cleared and priced by a sliding scale that caps at $5,000/world-wide usage. They have restrictions available but only on a special case basis (pre-existing contracts between musicians and other parties. I asked.) and provide a one-stop service for people who have limited budgets, tight schedules, and credit cards. They have a one-time $5 membership fee and a $1/song submission fee, 50/50 license split and a $2/song shipping fee for songs licensed. Your songs are represented for as long as you wish and if you get an exclusive deal with a publishing company or label, they promise they will remove your songs within twenty-four hours.

If you have a good idea of what your music is worth and prefer to wrangle your deals yourself, try SongCatalog Inc. (http://www.songcatalog.com>). Their system provides a virtual middleman for your negotiations. You submit as many tracks as you wish for placement in their online "Active List" or in the "Vault" and pay per track. Fees are billed monthly and start at $4.95 for up to twenty-five audio files stored in the "Vault" and $9.95 for up to twenty-five songs featured on the "Exchange" (their site's search engine) and increase by smaller increments every 50/100/200 songs registered. There are different levels of search capabilities that have a separate fee rate, but you can check out their website for more details. People who wish to license music register at no cost, browse the catalogue, and when a suitable track is located, they send an email - through the website - to the owner who then responds. Dialogue and negotiations ensue and you are ultimately responsible for finalizing your deal.

I would advise to check out the smaller companies. They appear to have more staying power than the large online music companies. (

Online, there is a market for indie music even if the band has broken up, doesn't tour, is brand new or not commercially friendly, and it requires hardly any work on behalf of the band. You fill in an application, get the appropriate signatures, mail it in, and wait for the money to arrive. It is the agency's business to market their catalogue, customer services, and bring the buyers in.

With record labels setting their standards higher and higher for new signings, showing up with a portfolio of licensed tracks in your package just might be the wedge you need to get in the door. It really doesn't matter where the track was used or for what product, the fact that your music can be sold for hard cash is the attractive quality they are looking for. 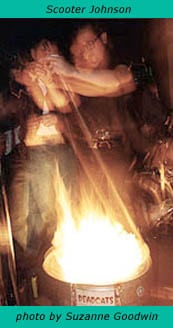 Always remember to be realistic with your expectations and tell everybody that you have a "licensing agency" (it does sound impressive and looks even better on your bio). There are hundreds of thousands of bands in the world with at least one album under their belts. That's a lot of competition for the same dollar. It's also unlikely that directors like Steven Spielberg or Kevin Smith are cruising these sites for music for their next big project. They have budgets that afford them just about any song they want. As an indie musician with an indie agency, your music will be marketed to projects without a great deal of exposure attached to them. Focus will usually be on the catalogue, not the individual bands. There are fees and it is a relatively new industry. It may take years for it to take off and compete with traditional process, but don't despair. It only takes one new digital filmmaker with a vision and a few thousand dollars to help pay off the band van or press those extra 500 CDs. It's a cheap and viable new way to get your music heard by a larger and potentially lucrative audience - and that's what you want. Isn't it?

(all fees referenced are in Canadian dollars)

Scooter Johnson started his illustrious career in the entertainment industry by studying the cello in elementary school, soon dropping the cello in favor of the far more romantic (and simpler) instrument - the gut-bucket bass. As the premier "bucket-master" in Canada, he spent five years touring the country with his hillbilly band, The Hard Rock Miners, and has created five internationally distributed albums with his psychobilly band, The Deadcats. Living in Vancouver (Hollywood North) also afforded him the opportunity to engage in the business of acting. A regular (background performer) on the Chris Isaak show and having worked in films and TV with such luminaries as Sly Stallone, Greg "BJ and the Bear" Evigan, Isabella Rosellini, and musicians Paul Stanley, Thomas Dolby, Stuart Copeland, and Sheila E (amongst many others); his search for fame and immortality has almost been concluded and it is time to pass on his knowledge to the next generation of seekers after the flame.