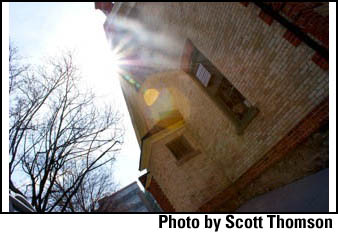 In These Shoes: By Scott Thomson

English Author Graham Greene once wrote “Man is made by the places in which he lives.”

The line, which comes from his 1938 book Brighton Rock, raises an interesting perspective on life. Perhaps, more than any other factor, where we come from shapes who we are. Think about it for a moment. If you were not born in the city you were, would your friends be the same? Would you have gone to the same schools, have the same favourite books? Listen to the same music?

Personally, I doubt it. At least in my case, had I not grown up in the bedroom community of Cambridge, Ontario, my life would have been drastically different. I would not have had the same friends. Not been in the same band, and most importantly, not likely been exposed to the same music scene.

Cambridge is about an hour’s drive west of Toronto, and doesn’t have a lot going for it. Factories, minor hockey, and coffee shops are its lifelines. There are no grand concert halls, no avant-garde art spaces, or really any big venues to expose oneself to culture.

What Cambridge did have going for it was a love of grassroots art and its proximity to Canada’s biggest and most diverse city, Toronto, and university towns, such as Guelph, Ontario. There were a shit-ton of bored teens who were looking for a way out, and most turned to music at some point.

Growing up, I can recall loads of local bands, playing in makeshift spaces. Kids just trying to kill time and have some fun. The Steel Workers Union hall would put on shows once or twice a year. They were licensed to serve booze, but teens were still allowed. Some of the first punk rock I ever encountered was at theses show. Just as the Epifat sound started getting huge, a large influx of local bands appeared. Bands like Furnaceface or Toronto’s  The Sinisters would headline to a rotating crop of bands from around the area.

The woman who worked the bar was about seventy and was easily convinced that you were old enough to drink. The turnout was always great at these shows because kids knew you could get good and loaded and see some decent music.

Some of the better bands started setting up little record labels. They would put out a few demos and every once in a while; the better stuff would turn up at the local shops. Sure, for a few years, there were no record stores in Cambridge, a city of 100,000, but we managed to survive.

In the mid-‘90s labels like Raw Energy Records put out some great stuff from bands all across the greater Toronto area. While the early punks feasted on bands like Hamilton’s Teenage Head, or The Forgotten Rebels, the newer generation had bands like Marilyn’s Vitamins (members later formed the recently defunct Hostage Life), or Jersey to grow up with. It seemed that every time a touring act needed an opener, some band from either Stomp Records or Raw Energy was there to round out the bill. The music was never great, but the scene was forming. The crowds got bigger, and the faces got more familiar.

Guelph was, and still somewhat is, a regular touring stop for bands. Within a twenty minute drive, on most weekends, you could find something to see. For whatever reason, ska hit it big in Guelph. Perhaps the city’s high reggae-loving, hippie population had something to do with it, but there were always ska shows happening at either the University of Guelph, or at the city’s punk rock club, The Trasheteria.

Those days were fun, but as I got older, it seemed like the scene died. The internet started catching on, and the dependence kids had to their local scene started to fade. Why bother starting a punk rock house, where kids could drink, play music, and make demos when it was getting ever easier to do it at home? Sure, punk was founded on the DIY ethos, but part of that ethos was also about community building. The scene started to fold up and die.

Like most places around the world, local record shops started closing nearly as quickly as they opened. The odd one would survive, but, by in large, the only music stores we had left were huge chains like HMV, who rarely stocked punk records that weren’t by Green Day. In a small city or town, the advent on the internet was good and bad. I can recall many hours sitting in front of my old dial-up modem waiting for the new Dwarves song to download, but at the same time, it wasn’t the same. The payoff was never as good as actually going to Encore Records and finding a rare gem in their used bins.

It was around this time I went away to college in a small town near Niagara Falls, figuring there would be tons of great things to do. St. Catherines, Ontario, much like Guelph, used to be a pretty regular stop for bands. I had always heard good things about that city, and my school was fifteen minutes away. Sadly, during the ‘90s the economy tanked, meaning a lot of the bars that used to host bands closed down, leaving one or two scattered throughout the city. Needless to say, I was not pleased with my choice of colleges. To this day, the city of St. Catherines has never returned to its former self. Bands, instead, opt to play in Hamilton, which is Ontario’s third largest city, and a forty-five minute drive from the U.S. border.

If you didn’t grow up in a university or college town, you had to travel for shows. There was no other option available. Bars in most towns were more likely to book an Aerosmith cover band than they were a local punk rock band. For whatever reason, even to this day, there are not a lot of house shows in Southern Ontario. Touring bands seem relegated to bars. There is the odd one, like the Trepid House in Waterloo, Ontario, but they seem to focus on slow and safe indie rock bands, as opposed to anything more aggressive.

In the ‘90s, the Cambridge band Bun had a fairly good setup going. They had a small rehearsal space set up, along with a small record company, but even they didn’t host a lot of shows. There simply wasn’t a place for many local bands to get enough exposure to make a name for themselves. Bands like The Constantines, whose members are mostly from Cambridge, would have to look to Guelph to provide the venue. By this time, the steel worker shows stopped and the local punk scene started to die.

Things started to change when the first “Rock The Mill” festival happened in 1997. Located in downtown Cambridge, along the banks of the Grand River, the annual and free music festival has been a great boon for many local bands. Once a year, for one day only, the City of Cambridge would become a viable music scene.

What started off with mostly local bands has grown into a festival which plays host to some of the larger punk and metal bands from across Ontario. Sadly, once the clock turns 11:00 PM, Cambridge turns back into a bedroom community, full of frustrated kids and their hockey-loving, Tim Horton’s coffee-drinking parents, but for one day a year, the scene is alive.

To be honest, I am not sure the point of much of what I have just written. Looking back at the concerts of my youth has been fun, but also somewhat sad. The internet, for everything positive it has created, has also created a generation of lazy-ass kids, who find it easier to talk to people on a message board than try their hardest to create a viable and creative local scene. Driving around my hometown these days, not many posters line the street poles, and if they do, they are usually for “get rich quick” scams, or hip hop nights at a local strip club. It is sad to think that the passion I shared as a teen has not been passed along to this newer generation of punks.

I still frequent the same record shops I did as a kid, and the average age of the customer has seemingly aged with me.

As a teen, there was nothing better than getting paid, taking an hour bus ride to Encore Records, and spending most of your check on as many records as you could buy and a copy of MRR. These days, Mediafire Records seems to be the main stop for music.

You know what? Fuck that. I want my city back. I want to see local shows, put on by a seventeen-year-old entrepreneur. I want to go to a local record store and see it packed like it was in 1995. Nothing would make me happier. Punk rock is about rebellion, but more than that, it is about community. Building bridges between like-minded kids.

If punk rock is to survive, which I believe it will, it has to be done locally. Each scene must be different from the next. Original thoughts need to be planted in people. Local art spaces need to be created. People need to log off, go out, and pay a cover. Kids need zines. Kids need DIY labels. Kids need spraypaint.

Scott Thomson is the Music Coordinatior at 100.3 Sound FM. based in Waterloo, ON. Beyond that, he is a freelance music journalist. Neither of these things pay, so to make some cash he works for "the man". Check out his blog at Topic-Conversation.Blogspot.com. He does a weekly radio show, which you can listen to Fridays at 6:30 (EST). You can stream it online at http://www.soundfm.ca/.