Anti-Flag, Thrice, Against All Authority, Pipedown The Roxy 2/28/02

Electric Frankenstein, The Stitches, Smogtown (or not) Lava Lanes 2/29/02

Anti-Flag and various others played the Roxy so I squelched my objections to that particular venue (fascist security) and joined my friend Nancy in search of some good clean fun. The plan was to make the Roxy show than high-tail it over to the Garage to hopefully catch Smogtown. An ambitious plan, true, but we were confident it was well within the realm of possibility. We arrived just in time to hear Pipedown launch into a very satisfying rendition of “Rebel Yell.” The singer, obviously enjoying throwing his fist in the air in a very Billy Idol-ish fashion, encouraged the crowd to do so as well and they responded with enthusiasm.

Strangely, all enthusiasm died when Against All Authority played. They played some newer songs and a few old favorites but the audience could care less. After a couple of songs, AAA’s trumpet player dove into the crowd and sank to the floor within about ten seconds. From there on out it proved to be a hard crowd indeed. Standing at the bar to the right of the stage (a blissfully empty space, since no one at the show appeared to be over twenty years old) we had a clear view. A barricade was set up and draped over it were a number of mostly teenage girls wearing bored expressions. They had obviously staked out a place up front in anticipation of the next band and were simply doing their time. 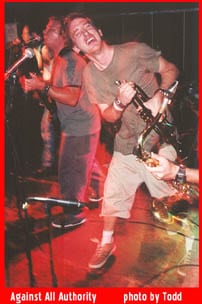 One guy however, up front but over to the left, was happily singing along with the band. Besides him, the only other people who appeared to be into it were the security guards who occupied the few feet between the stage and the barricade. I’ve only seen AAA a couple times but I thought they played a great set – their ska-tinged punk has stood up well since the years when every other punk band on the block decided a trumpet would make a nice addition to the band. I thought the audience’s lackluster response to them was rather depressing. It isn’t easy up there you know, and neither is touring.

In between sets, Nancy and I struck up a conversation with a guy who turned out to be a friend of a friend of a friend. (Note to male readers: David also bought us drinks. Sadly, this is a dying yet honorable art amongst the under-35 set and one that never fails to impress. Do it more often. We’ll be glad you did.) David was there to see Thrice. They were his current favorites, second, if I understood him right, only to Hot Water Music. He was just itching for them to come on and he wasn’t the only one. You could feel the anticipation in the air. Those teenage girls were lined up for something after all, and it certainly wasn’t AAA. A friend with nearly impeccable musical taste had warned me that Thrice was basically an Iron Maiden rip-off outfit so I was curious to see what all the brouhaha was about. What we got was four corn-fed individuals playing big, fat, overblown, self-important, bloated metal that tried really hard – and sometimes managed to be – epic rock and roll. Nancy called it rock opera; I kept thinking Judas Priest. But then, when I watched, stupefied, as every band member but the drummer approached the mics and began to sing an accapella intro to the next song I shuddered to realize that what was really at work here was the Eagles. It was a low moment. The kids, however, were quite impressed. The bored teenage girls were nowhere to be seen. They had been roughed up and shunted aside by a great horde of shouting, fist-pumping, delirious boys. The guy who had earlier been singing along with AAA was still there on the edges, standing there with a bemused look on his face, a half-smile floating across it and I wondered if perhaps he was trying to remember the last time he’d heard so many guitar solos in so short a time.

Anti-Flag came on and it was refreshing to see a bunch of skinny guys in black playing some lean, sharp-edged punk rock. I’d never seen them before and I liked them. Their music is fast, melodic, and raw. Always a tasty recipe. The political tirades were a little annoying even though I was expecting them. It’s not that I mind politics in my music but it seems like a superficial way to be civic-ly active. If half the people who cheered so wildly in response to the singer’s castigation of the Bush administration’s “war on terrorism” had voted in the first place, that arrogant cowboy asshole wouldn’t be President. On the up side, it was good to hear the singer direct people to websites like Democracynow.com and the Independent Media network (http://www.indymedia.org/). At least he gave them some good source material if they want it.

On that note, Nancy and I left to try to catch Smogtown at the Garage.

We arrived to find the old door-guy from Al’s Bar, Cliff, sitting ensconced at the entrance and a handwritten note stuck to the wall declaring that Smogtown cancelled due to a family emergency. Bummed, we went in anyway to see The Stitches, who I’d seen once before and remember liking. The Stitches are indeed likeable – not the most original bunch but they play good garage-y Detroit street punk with silly lyrics sung with a vaguely Johnny Rotten-esque flare. In fact they’re really quite excellent thieves, an important skill to possess when in a band, especially a punk one. The song I liked best lifted the bass line almost intact from “We Got the Beat.” The audience – the typical emaciated, tattooed Silver Lake bunch (not a 20 year-old in sight, God Bless ’em) – ate them right up. In a good way.

A fan of The Stitches told Nancy and me that Smogtown would be playing with The Stitches the next night at a bowling alley in Long Beach. She and I rearranged our schedules a little bit and went, bringing some friends along, ranting about the joy that is Smogtown.

We arrived to the Lava Lanes to find The Stitches on stage and a ridiculously uniform crowd. (I am mean, really, people, how many pairs of Creepers and studded belts does this world have room for?) As it turned out, Smogtown wasn’t playing there either, but I did get to hear that Go-Go’s song again, so it wasn’t a total waste.

But when Electric Frankenstein came on I decided that I could have saved the $10 dollar cover I’d paid and just stayed home and listened to my metal-head brother’s old Krokus cassette tapes instead. But I guess then I would have missed the opportunity to see three fat guys play ’80s speed metal.

We left shortly after that, vaguely dissatisfied and ready for bed. Nancy called me the next day and left a message on my machine. Smogtown was playing for sure that night. Neither one of us could go.