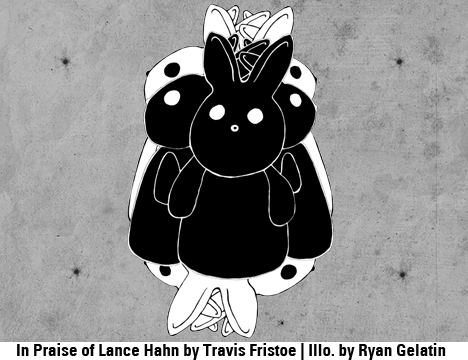 In Praise of Lance Hahn by Travis Fristoe: So Many Questions, So Little Response

Life is so sweet and life is so sad /
In the end your loneliness is all you’ve ever had /
California dreaming is just a waste of time /
The horror of life is both subjective and sublime.

There’s barely time to glean whether Hahn’s tone is earnest or winking because then the music breaks into the sort of undeniable 1-2-3-4 crescendo that makes songs so crucial.

Songs ought to stand on their own merit, sans context. However, it would be a gross disservice to ignore that The Horror of Life is Hahn and J-Church’s last record, arguably a culmination of his prolific, keen, and unapologetic output. Mark how the lines quoted above move from pedestrian language (“sweet,” “sad”) to pointed music references (California Dreamin’s contested history and brutal lyrics) and then further to trickier words such as “subjective” and “sublime.” Hahn likely would’ve shrugged off such high-low analysis. “It’s no big deal,” the previous J Church album stated, “to be so real.”

One song after another. The record keeps playing if you let it. Individual songs matter, sure, but here I want to talk also about the sequencing and the fraught space between tracks. The Horror of Life delivers on all fronts. That said, I’m sticking to just the first five songs. Why? Because those were the tracks I listened to over and over on the icy drive to the neonatal intensive care unit to see my newborn daughter. I could’ve let the CD continue but there was some comfort in listening—intensely listening—to the way these opening songs worked.

Why talk now about an album eight years past, whose songwriter will never hear this eulogy? It’s still winter here, my first away from Gainesville, FL in many years. I mail-ordered the J Church CD from No Idea, an enterprise where I used to work, and also saw grow from a bedroom project to a warehouse and then a whole building. What else? My grandmother was released last month from an elder care facility to instead maybe die at home.  Each of the initial songs on The Horror of Life deal with death and the struggle of living. Too dramatic? So what. Songs, songs, at least for me, help. 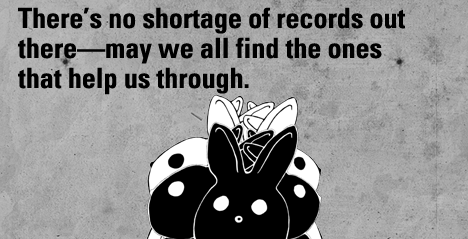 I also wrote this piece because I had previously overlooked The Horror of Life. No real reason, it just got lost in the shuffle. No amount of praise is going to bring Lance back but I can at least attempt half a eulogy. There’s no shortage of records out there—may we all find the ones that help us through.

The album’s cover is a close up of tightly arranged, animal-shaped sweets in garish colors. A rejoinder, typical of singer/guitarist Lance Hahn’s style, that our cheap sweets are almost always factory made with ingredients such as gelatin, aka ground horse hoof.

Track 1: “Vampire Girl Prefers Me Alive”
Most film theory stresses that the opening scenes are crucial; the lens through which we’re supposed to view the entire movie. Same with stories: we’re trusting you from the get-go about this created world and the characters. The Horror of Life begins with a female voice entreating, “Come on and take a ride…” But by line three we learn it’s a dream and the car ride is punctuated by frequent, curious stops at convenience stores. When our narrator follows her into one of the mini-marts, he sees her vampiric bloodletting.

Dreams, of course, have their own logic, yet they’re undeniably rooted in our own fears and desires. The narrator, arguably Hahn, has been left alive by a force that typically drains all blood and life. Hahn had been writing songs for more years than most of his listeners had been alive—surely this factors somewhere.

Track 2: “Eric Dolphy”
The cogent pop punk of the album’s opener makes for a starker contrast with the more straightforward hardcore of the second song, a paean to jazz musician Eric Dolphy.

Equally mysterious is the chorus, which states, “Something Sweet, Something Tender.” A joke? A much-needed break during the eulogy? “Something Sweet, Something Tender” is the second song on Eric Dolphy’s album Out to Lunch. The song follows the opener, “Hat and Beard.” If hat and beard are a disguise against the world, then Dolphy’s next song allows a reprieve, a needed bit of humanity.

Dolphy, four months after Out to Lunch’s release, died of diabetic shock in Berlin. Rumors persist, as Hahn states in the song, that Dolphy instead died from drugs. Here again, in Hahn’s lyrics, is the bludgeoning mix of life, art, politics, anger, and daily existence. He zooms the camera back and confronts the listeners: “Was he on heroin? How many black men have you ever known?”As the interrogation reaches fever pitch, Hahn again calls for “Something Sweet,  Something Tender.”

Note, too, the imperative way the song moves from praise, accusation, and lament to a grave solipsism. “Somebody murdered Eric Dolphy / All you bastards just stand and stare.” Where to put the causality and blame? What’s to be done now? I’d argue that death is more than “a dream” but he’s right that it hangs “in the subjective air.” As on other songs, Hahn asks these hard questions then turns it back on himself. “Maybe the problem is equally me trying to get a grip on it all.”

Praise should be given here to the other band members on this record, bassist Ben Snakepit and drummer Chris Pfeffer. Whatever the recording process—and I’m not one to get into any sort of studio talk—this album sounds righteous. By righteous, I mean thundering and undeniable: equal parts catchiness, melodic hardcore, and simmering anger. The sound quality finally matches the stakes Hahn consistently raised.

Track 3: “Cosmonaut”
The third song is unmistakably a Ramones homage. Sure, maybe everyone can learn to downstroke a few power chords, but the alchemy of the Ramones is less easy. J Church nail it here by channeling “The KKK Took My Baby Away.” Did a lovelorn Joey Ramone write that song against his right-wing bandmate Johnny? We may never know decisively, but I think of the two of them, onstage together for decades never talking to one another. And Hahn, equally prolific, moving from Hawaii to the Bay Area to Austin amid countless record labels and crashing waves of punk vitality. Too abstract? What I’m saying is that for Hahn to use Laika, the Soviet space dog, to talk about earth-bound loneliness is straight genius. 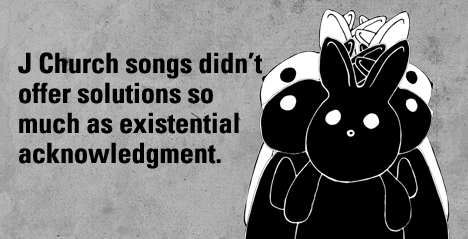 What of these monkeys and dogs we send into infinite, deadly orbit? They didn’t survive. Does anyone remember Gil Scott-Heron saying “Put Whitey on the Moon”? “Cosmonaut” answers these questions with a single-note guitar solo and moves on. J Church songs didn’t offer solutions so much as existential acknowledgment. Even in 1994, Hahn ended verses with lines like, “This relationship is understood.”

While we’re praising the dead whose work still speaks to us I want to add the end lines of Edwin Wolfe’s “A Poem to Delight My Friends Who Laugh at Science Fiction” because of the thematic similarity to “Cosmonaut”:

Wolfe’s life is worth a look if you care about class struggle, the Spanish Civil War, and independent writing. I’ll leave it at that. Let’s keep going.

Track 4: “If I Have to Dance, Then I Don’t Want Your Revolution”
Here, the most mysterious lyrics of all. The title’s a riff on a slogan misquoted from anarchist Emma Goldman. The T-shirts and stickers have her saying something like, “If I Can’t Dance, Then I Don’t Want Your Revolution.” It’s an oversimplification, akin to punk meaning no-rules, do-whatever-you-want, dude. Here’s what she actually wrote in her memoir, in a scene that would make perfect sense at any punk show:

At the dances I was one of the most untiring and gayest. One evening a cousin of Sasha [Alexander Berkman], a young boy, took me aside. With a grave face, as if he were about to announce the death of a dear comrade, he whispered to me that it did not behoove an agitator to dance. Certainly not with such reckless abandon, anyway. It was undignified for one who was on the way to become a force in the anarchist movement. My frivolity would only hurt the Cause.

I grew furious at the impudent interference of the boy. I told him to mind his own business, I was tired of having the Cause constantly thrown into my face. I did not believe that a Cause which stood for a beautiful ideal, for anarchism, for release and freedom from conventions and prejudice, should demand the denial of life and joy. I insisted that our Cause could not expect me to become a nun and that the movement should not be turned into a cloister. If it meant that, I did not want it. “I want freedom, the right to self-expression, everybody’s right to beautiful, radiant things.” Anarchism meant that to me, and I would live it in spite of the whole world—prisons, persecution, everything. Yes, even in spite of the condemnation of my own comrades I would live my beautiful ideal.
[Emma Goldman, Living My Life (New York: Knopf, 1934), p. 56]

Hahn, a veteran of collective record stores (Epicenter), DIY publications (Maximum Rocknroll), and many, many record labels, had seen a thousand varieties of such misreadings and exploitations. The vitriol in his voice is no joke: “Fuck your stupid fucking band. You think I don’t understand? From the view underground you are looking like a clown. We don’t need you.” He weathered, dignity intact, the Lookout Records / Nirvana / Green Day explosions. I shouldn’t have to say this but I will anyway: our records and our efforts may change but they needn’t cheapen or atrophy.

Instead of following those tangents, I’ll stick to the song. Each verse veers in new directions. What to make of these lines:

So sad, in love with a fad,
In love with a man.
Who was the worst one you ever had?
He’s still someone’s daughter’s son.

Rather than attempt to analyze (and you’re reading Razorcake so I think you can figure things out yourself), I’ll instead praise the way Hahn again blends the personal and political. Sure, the song’s about bands and selling out and appropriation. But the opening and closing verses are achingly human. The “she” mentioned in line one is not named, nor is much detail given. The end line haunts me. Whoever the worst one we’ve ever had (“had” in whatever sense), Hahn posits him as “someone’s daughter’s son.” Not just someone’s son, but someone’s daughter’s son, going further generationally back. I’d argue, too, that the 2006 Nirvana documentary,About a Son, factors somewhere. Meanwhile, a few new Nirvana documentaries arrived this year.

Track 5: “The Horror of Life”
Here again Hahn blends blood, female characters, and the West Coast, narrating it “like she tells a joke.” Cities are compared to abattoirs. Hahn sings the simple, declarative line: “the horror of life is both subjective and sublime.” Not just words to be read on a CD booklet but also a sentence half-spoken and half-sung. Then, like a gift, comes the breakdown between the verse and chorus. A familiar drum fill, tasteful and exact, segueing us to a quick bit of head banging. What is more joyous than closing your eyes and banging your head to loud music? 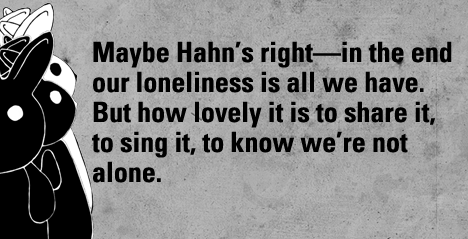 Maybe Hahn’s right—in the end our loneliness is all we have. But how lovely it is to share it, to sing it, to know we’re not alone.