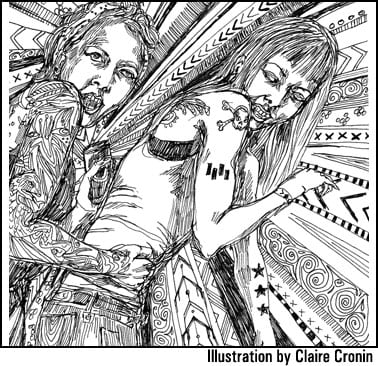 In Plain View: By Nighthawk

It’s been two years, but I’m back! I first wrote an article for this site about two years ago. It was called “Commercials Suck More.” I’ve been busy publishing a Magazine in Saint Louis called Dudes Magazine. That’s my excuse for why it’s taken me so long to get back on here. Enough on that, though. Here’s the article.

So everyone has tattoos, right? Well, almost everyone. They’re really cool, too, right? Sure, why not. I don’t have a problem with tattoos, in and of themselves. I mean, some ink jobs are fucking dumb, and others are just dumb. But dumb in a funny way. You know, the one on your chest of two naked girls doing each other. Then there’s the fucking dumb ones, like tribals and Chinese shit. Just because the white Dude at the ink shop said the symbol means “strong-minded,” there’s no guarantee on it. It probably really means “loves to garden.” Which is fine, if you’re a gardener. But you’re probably not. On top of these two types of tats, you’ve also got the ones that are actually really fucking cool. Whether it’s the artwork or just what it actually means, these ones are badass. Either way, whether it’s dumb or not, you’ve gotta decide where to have the tattoo on your person. It’s a big decision; almost as big as which tattoo to get. Let’s go over some locations.

If you get a tattoo on your head, you’d better be a gang banger or a convict. These are the only Buds getting away with these. How many regular Joes, who aren’t really that tough, are walking around with ink on their dome? Some, but not many.  Moving downward, a neck tat is questionable because if you want it to not be seen (like for a job interview), it’d better not be that high up (front or back). Otherwise, you’re gonna have a tough time explaining to Bud Interviewman why you’re wearing a hooded sweatshirt in June. If you want people to know that you’re “tuff,” you don’t have to get a neck tattoo. You could just walk around with your shirt off in Winter. Or go around punching walls for no reason.

Another weird spot is the ass. Especially if you’re a Dude. Babes can get away with this because it’s “cute.” But only if they are cute. You don’t want some ugly heifer with her jeans falling down, showing everyone that she’s got a tattoo of a Smurf on her right cheek. That’s enough to make you lose your lunch. But for a Dude, it’s just weird. Although I have heard of a couple good ideas for the rear section. I don’t wanna say what they are, ‘cause maybe no one else has these ideas yet.

Last spot on the body I’m gonna mention is the feet. Do you really need any ink on your feet? I don’t think so. Not to mention it’d hurt like a son-of-a-bitch. A lot of peeps do the hand thing, which is fine I guess. Not my cup of tea, but whatever. Maybe it’s just me, but I think feet are gross anyway. They stink, they’re wrapped up all day, and they’re gross. That’s why I think feet are gross. Don’t put someone through the disgustingness of touching and smelling your feet, just so you can have some dumb ink on them. That’s just mean. Not that we’re through the intro, I’ll move on to the meat and potatoes of this piece.

So you wanna be cool, right? Then get a tattoo. No seriously. That’s evidently what a lot of people think. Next time you’re in public, take a good look at everyone. So many people will have ink. And even more will, too, but you won’t be able to see it. Maybe it’s ‘cause it’s cold out and they’ve got warm clothes on. Or maybe it’s ‘cause they really don’t care for or want other people to see their work.

This brings me to the point of this thing. Is it really that important for other people you don’t even know to see your tattoos? Sure, some people with highly visible ink maybe just don’t care, or they’ve got so many tats that they’ve started to run out of real estate for them—and that’s why there are so many that you can see. But there are those out there that just simply must have other people see their tattoos. These people are the same ones that just have to have people looking at them for no apparent reason. Did you really spend your hard-earned money on an ink job just to show it to other people? Seems preposterous. I’m not sure if that’s the right word there. Oh well. It’s like saying, “Look at me. I used to have money, but on many occasions, I spent it here, here, here, and here.”

On the other hand, you could argue that it’s a waste of money to get tattoos and never let anyone else see them. These people could argue that they got tattoos “for themselves.” Just something to remind them of a particular time when they had fun or something. I have one of these tattoos. In 2006, the Cardinals won the World Series. I was at the Fest in Florida, though, so I decided to get the STL logo that the team has on their hat as a tattoo. Every time I see it, I remember the World Series and the Fest. It’s on my upper right arm. So, you normally don’t see it. Unless I have my shirt off or I’m wearing a sleeveless shirt (both of which happen quite often), you won’t see it.

Is it so bad that you get a tattoo, and no one can see it? I don’t think so. But I guess I don’t have the mentality of someone who needs everyone to see their ink. I was gonna even write a song called “I Am Cool, Cause I Got a Tattoo,” but I’ve been too lazy to do it. It’s a tongue in cheek kind of thing, in case you didn’t know. I even got into once with friends of mine who also got a World Series tattoo with me. They got the Cardinal bird, not the logo. I was asked why mine is not on my forearm where you can plainly see it. My response was that I knew I had it and that was all that really mattered. I was told I didn’t “wear mine on my sleeve.” Whatever. I don’t care if someone else knows I have it or not. I have the executive look. You can’t see my tattoos unless my shirt is off. And I’m just as cool as the guy who’s got ‘em all over himself. Maybe even cooler.

It’s not a contest for how many ink jobs you can get. And it really doesn’t matter if they’re visible or not. I guess I’m not that punk rock ‘cause I don’t have ink up and down my arms for everyone to see. I could wear those really tight T-shirts with really short sleeves. That way, you could see my arm ink. But I really don’t wear those. I do have another tattoo on the left side of my chest that says, “Shirts are for work.” It’s one of those dumb, funny ones. Should I therefore have my shirt off whenever I’m not working? I suppose, but I don’t. And you won’t see it, unless I do. Maybe these people with their visible ink are worried about being shunned by the punk rock community. I’m not. Any “community” where you can’t do what you want to with yourself is not any “community” I wanna be a part of. So, if you wanna be cool, get a tattoo. And be sure you get it in plain view, otherwise, you won’t be that cool with your new tattoo.