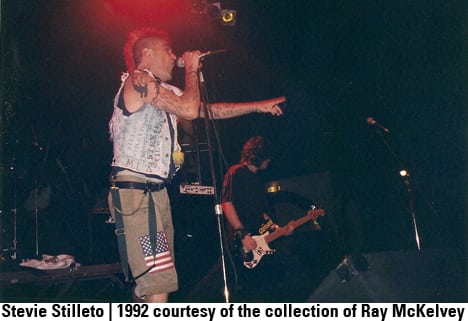 In Memory of Ray McKelvey, aka Stevie Ray Stiletto

The fact that you don’t know a dozen Stevie Stilletto songs off the top of your head is a fucking tragedy of epic proportions. Ray McKelvey, aka Stevie Ray Stiletto, was easily the most influential person in my life in punk. Across more than three decades of playing punk rock, he had a remarkable impact on hundreds of fellow musicians and fans, shaping punk scenes on both sides of the country. He shared the stage with The Dwarves, GG Allin, and the Dead Kennedys. Upstart bands like Green Day and Limp Bizkit once opened up for him. But you will be forgiven for not knowing who he was. Ray’s biggest obstacle to greater fame was Ray himself.

Ray and I grew up in Jacksonville, FL, a conservative Southern city. Ray was a few years older than me and I didn’t get to know him until 1982 when he formed his band. Inspired by Iggy And The Stooges, Alice Cooper, and the Ramones, Ray teamed up with Michael Butler, Steve Gallagher (soon replaced by Thommy Berlin), and Rob Akkk to form one of Jacksonville’s first punk bands: Stevie Stiletto And The Switchblades. They would quickly drop the last half and be known simply as Stevie Stiletto. 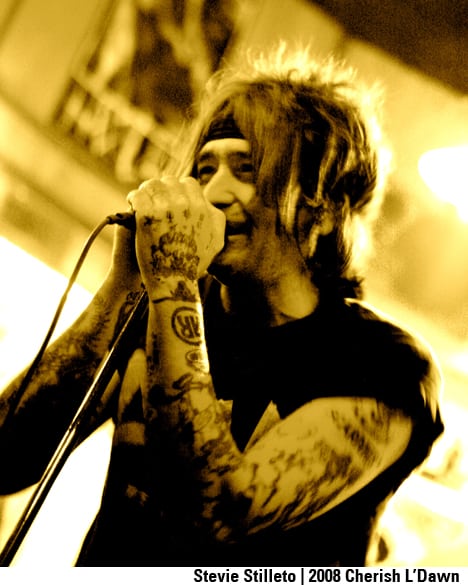 Their early shows were tumultuous affairs, with the band thrashing out short songs of high intensity, and Ray emerging as a charismatic and captivating frontman. In a town characterized by a strong conservative Southern Baptist sensibility, combined with long-standing racial tensions and a proud “Southern Rock” musical heritage (Jacksonville is home to the bands Lynyrd Skynyrd, Allman Brothers, Molly Hatchet, and .38 Special), punk was seen as alien, and the band met with disdain and outright hostility. Yet, at the same time, the band gained a strong following among Jacksonville youth who were attracted to the music and the mayhem, myself included.

By then I was listening to wide variety of punk musical styles (from the Clash and X-Ray Spex to Naked Raygun and X), but it was Stevie Stiletto that formed the DIY punk template that I would always carry with me. They made their own shirts, released their own music (initially on cassettes with hand copied covers), booked their own shows. They were the living embodiment of DIY punk. Their first release was the sarcastically entitled 13 Greatest Hits. And while Ray initially affected a fake British accent (we thought that’s what punk was supposed to sound like, you know?) the lyrics deal with things that were immediately relevant to us: the oppressive nature of life in a conservative Southern town, the inanity of popular TV, the venality of politicians, and, of course, girls. These would be themes that would continue throughout much of Ray’s musical output over the next thirty years. Musically, those first releases continue to shine as gems in what we would probably now refer to as “pop punk.” Over the years, the songs became more sophisticated, but were always rooted in a Ramones-meets-Kinks sensibility.

Originally, the band began touring across the Southeast, playing in whatever venue would book them. Ray would often call up with his fake British accent and pretend to be a U.K. touring band in need of a last minute show. But Jacksonville remained hostile. Most places either disapproved of the musical style and/or feared the mayhem that might erupt at a concert. The band responded to this dilemma by booking their own shows in alternative venues, playing in local National Guard Armories and community centers, before they eventually formulated a more substantial plan, turning their own practice space into their own music venue: the 730 Club. The 730 Club provided the center of gravity for the local punk scene to gel. Ray would put local bands on the bill, often giving them their only opportunity to play. Through their own touring, Stevie Stiletto had gained access to the national punk scene and utilized those contacts to book shows. Soon bands like Black Flag, Sonic Youth, SNFU, Neon Christ, and others were stopping in Jacksonville to play shows at the 730 Club, something that was unthinkable a few years before. The 730 Club actually generated very little money for the band and existed primarily to help foster and maintain a scene in Jacksonville. The fact that there was an independent music scene in Jacksonville during the 1980s is due almost entirely to Ray and the band. 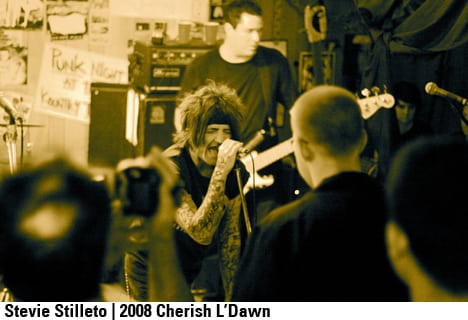 After various line-up changes, the band decided to move to San Francisco around 1989. The timing was largely fortuitous, as the band eased into what was a growing punk scene in the Bay Area. The band continued to self-release their own albums (Food for Flies and Smell the Sock being two exceptional releases) and soon became regular features at local venues. Ray and the band became important staples in the punk scene, helping to foster a local punk community, and were even featured on the cover of Maximumrocknroll. Unfortunately, San Francisco also provided harder drugs that the band indulged in, particularly Ray. He eventually moved across the Bay to Oakland to be closer to his drug connections (just as Iggy Pop and most of the Stooges had moved out of their communal house to be closer to their own dealers). The nadir for the band occurred when Ray, in an attempt to come down from a drug high, put himself in an alcohol and Nyquil-induced coma the day before a major concert with the Dead Kennedys. Shortly afterwards, while on tour through Texas, Ray walked out on the band. Everyone has slightly different recollections surrounding the reason for the breakup, but all agree that an angry and shoeless Ray stepped out of the band’s van in the middle of the night and the band drove off without him.

Upon returning to Jacksonville, Ray contacted guitarist and childhood friend Frankie Phillips and re-launched Stevie Stiletto. Though there were several lineup changes, the band solidified with McKelvey, Phillips, Lorne Mays, and Neal Karrer. Continuing to self-release their albums (such as Back in Arms and the painfully under-appreciated An American Asshole), the band toured around the U.S. and in Europe throughout the ‘90s. But they never quite gained the national following they deserved. More often than not, it was Ray’s self-destructive behavior that sabotaged things. It’s a familiar story, repeated across the decades of wrecked punk rock careers. Ray had no idea how many times he had been arrested. But how many people can claim to have been pulled over by a pack of ambulances? And he was able to walk away from that one because one of the cops was a fan.

Yet, by the early 2000s, Ray’s drug use and alcoholism had taken its toll and his health plummeted. He was diagnosed with hepatitis C, jaundice, and cirrhosis. The doctors gave him days to live. Against the odds, Ray survived and cleaned himself up (with the help of a good woman)… only to be diagnosed soon afterwards with cancer. Thinking that Ray’s days were numbered, I started working on a documentary about Stevie Stilletto in 2008, picking up the project that Doug Milne had started earlier. I finished the film My Life Is Great: The Stevie Stiletto Story in 2009, rushing the final edit so that Ray could see it released. It opened at a local theater in Jacksonville for two sold out shows. It was a reunion of sorts, with old punks falling out of the woodwork, and Ray basking in the limelight.

But the cancer didn’t immediately kill Ray and the documentary didn’t generate the fame he always desired. He grew frustrated by this perpetual state of limbo and began drinking and using again. Close friends distanced themselves for reasons of self-preservation. I was lucky that I had a thousand mile buffer between us. We would talk on phone occasionally and write hilarious letters to each other. I once called right in the middle of one of his failed suicide attempts. When he gushed how much he loved me, I knew something wasn’t right and started calling in back-up. But even with his suicide attempts, Ray still managed to screw things up and survive.

The last few months were tough on him, as the pain and cancer grew. On the phone, he swore he would beat it and continued to think about schemes for future tours, records, and musical projects. In one of our last phone conversations he told me he was sending me some of his demos for me to add bass and drums on, then release. I told him I would, though I knew it was unlikely to happen.

Ray passed away in the early morning hours of Sunday, March 24, 2013. I last spoke to him a few weeks ago. He had just gotten back from a round of chemo/radiation treatment and it was wearing him out. After a few minutes, he told me he had to go lie down. The last thing he said to me was “I’ll call you back in a few days after I feel better. Love you man.” I love you too, Ray. I hope you’ve finally found some peace.

Watch the trailer for the documentary

The documentary is available here