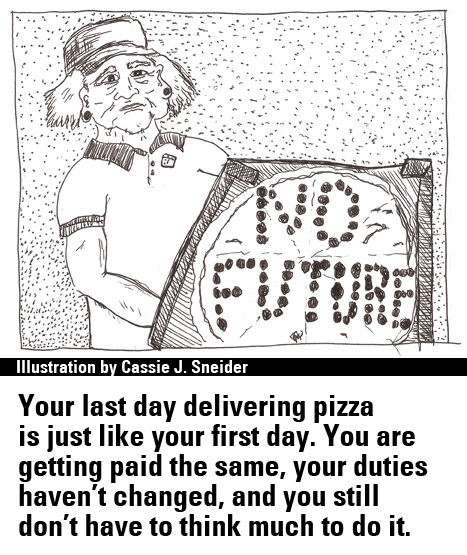 I Am An Adult: It Only Took Fifteen Years

I turned thirty-three years old in February. No, I don’t need any belated birthday gifts. In the handful of months before my birthday, I started getting my life straightened out. I’m proud of what has changed so far, and I’m going to tell you about it.

A couple months ago, I went to the dentist for the first time since around 2008. That was the last time I had dental insurance. If you remember a recent column of mine, “Fuck the Man,” a lady I used to work with let me use her address for my vehicle registration. Well, that same lady got me hip to a local healthcare center that provides services to people without insurance.

It had been over five years since I sat in a dentist chair, and I didn’t have any cavities. Isn’t that amazing? In fact, I have zero cavities. None throughout my whole life. I’m a lucky dude in that regard. My gums had been bleeding for a few months when I was brushing my teeth. The dentist told me I needed to floss everyday (duh). My front teeth in the top row were starting to wear thin. She told me it’s from having acid reflux disease. While I’m sleeping, the disease causes gas to come up my throat and wear on my teeth. Her advice was that I get some kind of a mouth guard to protect my teeth. My friend Jennie said I should probably just take medicine for the acid reflux, and then my teeth wouldn’t wear down from the gas. I also had trouble sleeping on my side, due to the reflux. So it would alleviate that problem as well. The dentist recommended Sensodyne ProNamel toothpaste, in addition to the mouth guard.

That dentist visit only cost me thirty-five dollars. I had to show them a paycheck stub and my I.D. That was it. Then, I was off to Walgreens to buy dental floss and toothpaste. That ProNamel is expensive, but it’s worth it. I now floss every morning and brush twice a day. These gums don’t bleed anymore. I need to call back in June for an August appointment. I didn’t get the pills until a few weeks later, but they are helping. I don’t feel like I’m gonna throw up anymore when I’m lying in bed. So all is well in the mouth department.

On a related note, I signed up for health insurance through http://www.healthcare.gov/, otherwise known as Obamacare. I’d like to see some of these critical motherfuckers try their hand at being President. The first time I was collecting unemployment, Obama’s stimulus package kicked in and I started getting an extra twenty-five dollars or so each week. And now healthcare that I don’t have to pay for? He’s okay in my book. Anyway, I started the whole enrollment process back in November. The site was down the day I first tried. I attempted to do it over the phone, but the lady who answered wasn’t very good at what she was doing. I hung up on her and tried back later. Dick move, but she sucked at her job.

I had much better luck with the second person. I didn’t want to pick a plan over the phone, so I went on the website. I had trouble creating a password and whatnot, so I called the number, which was now saved in my phone address book as “Healthcare.” Clever, huh? I was eligible for a tax credit of $227 dollars per month. My online information was reset, and I was able to go on the site and select a plan.

I had to call and deal with some old lady who was going by the fucking book, as far as procedures. It was brutal. My same friend who gave me the pill advice came through for me again. She has to select plans for people at her job, so she understands what all the different insurance benefit terms mean. I do not. She got on the phone with the old lady and helped me with my selection. I have a plan that costs just about the same amount as what my tax credit is per month. Therefore, I don’t pay anything. I haven’t had health insurance in about ten years. I selected a doctor from the list and informed my provider who he was.

My first appointment is in three days. I’m getting a physical! I don’t think a visit to the doctor even costs me anything. (I don’t have my health insurance card on me). And prescriptions are only like ten dollars or something. An emergency room visit is either fifty or one hundred dollars. Not bad, huh? Yay, Obama.

Moving on from my physical health, I purchased a vehicle. Again, if you remember my “Fuck the Man” column, it was all about how my car was a piece of shit. It wouldn’t pass inspection and emissions tests in Missouri, so I registered it in Illinois. They don’t require much across the Mississippi. Well, the transmission on that car went out. On Valentine’s Day. Lovely, right? It was a used transmission that was installed about two years earlier. I paid $1,500 for that. To get two years and about 40,000 miles out of it isn’t too bad. The car was a 2001 and had over 208,000 miles on it. I decided it was time to move on. I donated my car to Goodwill. They had a towing service come and get it a few weeks ago. It is put in an auction every Thursday until it gets sold. I can claim a tax deduction for up to five hundred dollars for it next year on my tax return. If it sells for over five hundred dollars, I claim that amount. Not a bad deal, and the money they get for the car is used to educate people who are being rehabilitated. I’m just trying to help out.

As of today, the car hasn’t been sold yet. Probably because it’s a piece of shit. I had to get another car, so I figured why not get something nice and dependable? After lots of time looking around (looking for a car SUCKS), I decided on a 2013 Toyota Corolla. 33,500 miles are on it (which is kind of high for it only being a year old, but it was a rental car). It’s like renting a car that I don’t have to return. Everything works, it drives well, it’s clean, it doesn’t smell, etcetera. And I plan on registering it legitimately in Missouri, where I live. No more of this under the radar/look over my shoulder stuff. I’m too old for that nonsense. 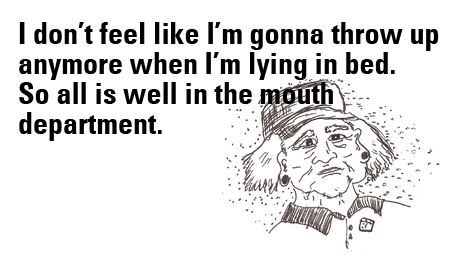 I even wear my seat belt now! I didn’t use to, because I don’t like the restraining feeling. The only time I would wear a seat belt was when I was driving my Dad somewhere. He would say “Aren’t you forgetting something?” if I put the car in drive and didn’t have it on. My new car features an incessant beeping noise that starts when I put it in drive if my seat belt is not fastened. The beeping becomes more frequent after a few seconds, but then finally stops. Then, the red seat belt light flashes as long as the car is on. The other day, I decided if it’s safer to have your belt on, why not wear it? It makes the beeping and flashing go away too, as a result.

To the job department we go. I still deliver pizza—which isn’t that bad for money, but it’s just kind of dumb to do unless you’re in high school. I mean, I’m not a stupid person, yet I’m working a job that requires almost no thought. And there’s no future in it. I told a friend of mine the other day that your last day delivering pizza is just like your first day. You are getting paid the same, your duties haven’t changed, and you still don’t have to think much to do it. That’s kind of depressing. I’ve been delivering pizza for over three years. I’m thirty-three for fuck’s sake!

So over the last few months, I’ve heated up the job search. My friend who helped me with picking a health care plan also made me a resume. I had one, but it was pretty sad looking. I have been on a couple interviews, but they were for crappy jobs, making less than I do now. I did, however, do a phone interview with Southwest Airlines yesterday. It was for a part-time position, but I would get full medical and dental benefits. Travel benefits are also included. That would be boss! They are supposed to get back to me in three to four weeks.

In addition to that, I have an interview in two days for a manager position at a pizza place. I don’t want to work in another pizza place, but the sign advertised a $30,000 salary and benefits. If I made that much money, I would pay off a few things and move out of the dump I live in now: Chill Dawg Cove. I’ve been there for two years. That’s long enough. Just today, the hot water went out. I tried to reset the water heater a few times, but no dice. So I took a shower at my parents’ house, and am doing my laundry there while I write this column. MULTI-TASKING.

In addition to the job search, I have decided to go back to school to be an electrician. In 2008 (the last time I went to the dentist), I was an electrician's apprentice. The recession hit, I was let go, and I quit school. I was paying the tuition myself. In hindsight, I should have taken a loan out. The tuition wasn’t much. 20/20, right? A few weeks ago, I emailed the school secretary. I told her I wanted to come back and finish. I had finished a year and a half out of the four-year program. She is letting me take a one hundred-question test for free. It normally costs $250. If I get at least eighty questions right, I can skip the first year. She emailed me a practice test with the answers. I am doing that next week. Once I come out and take the test, my name is put on a hiring list for contractors. I will start class in August. I figured I already used to do that kind of stuff, I have all of my tools and books, and it pays well. It’s time to stop being a bum.

I’ve got a few other things going on, too. I did my taxes online by myself for the first time ever! I quit eating fried food and going to drive-thru restaurants. I cut back on my beer intake. A little weight has been lost as a result. My beer belly is smaller. I went out the other night by myself and only drank five beers. That used to be what I drank before I went out. Times have changed. I did start smoking again. I won’t lie. One thing at a time. I’m trying to be less of an asshole to people, and also be more productive. Sitting around, talking shit, and getting drunk for absolutely no reason is a thing of the past.

I hope you have enjoyed reading about my transformation process. I take care of my teeth, I have a doctor, a new car, and, hopefully, a new job, I’m going back to school, and I have a new outlook on life now. I have finally grown up and joined the other adults. It only took fifteen years.

Nighthawk founded Dudes Magazine in 2002. He is also the editor. He is also the founder of Do What? Records, which was started in 2012. Saint Louis, Missouri is his home. You can email him at: [email protected]