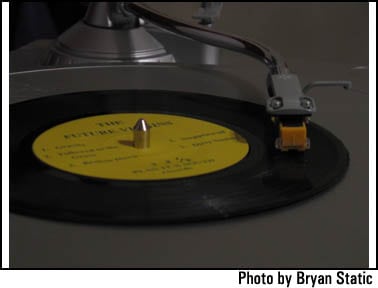 Disclaimer: Every band I namedrop in this column has nothing but my utmost respect (for the time being).

In my book of rules, the revised 2006 edition of course, good bands are broken down into two groups. There are the bands that write good songs and there are the bands that write good albums.  Arguably, a good chunk of the albums I own are by song bands (from here on in referred to as the “songitizers”) rather than album bands (from now on collectively called the “albumination”). The songitizers have can be classified further by splitting them into three subcategories, the tidy (those who know how to arrange their songs to achieve desired effect), the casual (the ones who place songs in a way that flows nicely, but ultimately could be replicated in a different order of the same songs), and the misguided (those who try to put songs together intelligently but make very obvious choices). The albumination (spelled the same singular and plural) have two categories, the gateways and the diggers.

Dillinger Four is a fine example of a gateway albumination. Their name comes from the fact that the songs, while brilliant standing alone and easily hook potential fans, hold best in context with the rest of the album. * I don’t think I would I enjoy “SELLTHEHOUSESELLTHECARSELLTHEKIDS…” if it wasn’t placed exactly between “The Father, The Song, And The Homosexual/Single Parent” and “folk song.”  Toys That Kill, The Ergs!, and The Arrivals are a few other great examples of albumination.

Some albumination, like the Abi Yoyos or None More Black, tend to take it a bit too far and make their music only accessible when listening to the whole album. I truly don’t think I would have any respect for None More Black if I hadn’t listened to This Is Satire all the way through several times. (Incidentally, has anyone thought about using Jean-Paul Sartre quotes as song titles and naming their album This Is Sartre?) This Is Satire, to some, is criticized heavily for its overuse of quasi-country songs that are slower than the run-of-the-mill punk rock. I hold this album in high regard because I find the slow songs a welcome break in pace and the way they framed the album in general impressed me. However, if you hear the songs out of context, thinking it was their typical sound, it might bring you to the wrong conclusions about the normal style of the band.
Now, let’s take a look at a few songitizers.

The Ramones, as great as the band was, were never an album band. Some would contest they weren’t much of a band at all, but again, that’s another argument (and a poor one at that). I often hear -- or maybe it was only once -- that the Ramones’ self-titled album was more of a greatest hits compilation than an actual album. I have a problem with that. A greatest hits album sounds to me, at best, to be disconnected. The Ramones said themselves that they pretty much placed the songs on the album in the order they were written and the end result produced a classic in punk rock circles. This is why I place the first album under the casual designation. The album is brilliant, don’t get me wrong, but in the end it doesn’t feel that they knew exactly where they were going when they started, but that was part of the beauty of the Ramones in the first place. This condition took its hold on their first four albums and, oddly enough, disappeared around the time of End of the Century. Take from that what you will. Other casuals include the Real McKenzies, NOFX and The Copyrights.

Tiltwheel is one of my favorite bands. As of current (and for about the last year), Hairbrained Scheme Addict is ranked number four in top ten albums of all time. Since Tiltwheel have only released one true full-length album (Battle Hymns doesn’t count), I can’t completely back up my theories on this one, but from the data given I believe Tiltwheel is in the tidy camp. They know where to place their songs, but something about the release just doesn’t scream album. I think maybe the problem is that I feel there should be something after the song “Lullaby,” but that’s probably just a personal complaint. Other tidy campers include Grabass Charlestons, The Marked Men, and The Queers.

The rarest of the three sub-categories are the misguided. Usually these bands never make it past the “listenable” stage, but every once in a while a band will gain my attention with a poorly (or uninterestingly) paced album. The Loved One’s self-titled effort has some killer tracks. The first half of the album really has some shape and fluidity to it. After that, the songs remain strong, but the direction loses its momentum. The result is an album that sounds good, but doesn’t feel right; much like a talented violinist kicking you to the beat as they play.

When all is said and done, it’s sometimes incredibly hard to differentiate tidy songitizers with gateway albumination. The true test to determine their status exists on our beloved battlefield. The Tranzmitors, who I was completely on the fence about on how to categorize, were in town the other week and I had a chance to attend the social gala. The Tranzmitors are mostly known as a single band and they pick great songs to accompany each other. Their album was another question altogether. Did it function best as one piece or would I have felt the similar or equal if they were released as five separate singles? When the ‘Mitors hit the stage, they played through a few choice cuts from the album, namely “Plastic Genocide,” “Alma Blackwell,” and “Do I Really Want to Know?”  They put on an amazing show, but I longed to hear the songs in the order I was used to. That’s the definite sign of an albumination.