The Hvorslev, Say Bok Gwai, and Funeral Shock show at Thee Parkside was a very last minute deal for me. There were actually three other shows I’d been considering going to that night, but as the afternoon wore on I’d pretty much decided against all of them because I was tired and felt like staying in. However, as I was getting ready to head home from work, a friend told me that he might go check out this show at Parkside, and I had to at least have a little peek online to see what the bands that would be playing sounded like. As soon as I heard Hvorslev, my curiosity was piqued and I felt a second wind coming on.

I love Thee Parkside (http://www.theeparkside.com/). It’s a smallish bar in the more warehouse-y area of San Francisco (out where the streets are named after states). They have lots of good shows there for cheap, and a decent-sized area out back where you can hang out and smoke, escape the music if you’re not into it, talk with friends and/or play ping pong. I could also mention that there are hooks back there for bikes, which I just realized for the first time on Thursday, even though I’ve been going there for some time now and have at least once been vexed by the lack of places to lock up a bike out front. Good to know! And here I am, passing the savings on to you.

The show on Thursday wasn’t very crowded, but it seemed that what it lacked in attendance, it made up for in volume. Holy shite, it was loud! I concerned myself throughout the evening with band members not wearing ear plugs.

So the first band, Hvorslev (http://www.myspace.com/hvorslev) interested me when I heard them because they have this beautiful massive bass and some weirdo vocals. That is super nice to me. Plus, it seems there is some affinity (although I haven’t yet determined what, exactly) with the band Turks, who’ve recently caught my attention (I know, I know, I’m late). If you were a type of person to try to figure out what Hvorslev means, you might first learn that dictionary.com feels that “Love Slave” is an appropriate suggestion to make when confounded by a word like “Hvorslev.” You might later learn that “TheHvorslev method constitutes a rapid means of characterizing the hydraulicconductivity of shallow ground-water systems.”

I love the little details like when the drummer catches the symbol to make it stop sharp.

Comparisons to Scratch Acid and Big Black seem inevitable (from me, by the way, that should be taken as a substantial compliment). As I mentioned above, the bass was massive and that killed me. When they first came out – drummer, singer, and bassist – I thought I might miss the rhythm guitar, but after they got going and with the bassist switching back and forth on some pedal(s?) it totally worked and I was into it. The singer looked like he was about to burst a blood vessel; so full was his neck and so strident were his rantings. It was excellent. I wished there were more people there to get into it with him, although I suppose the open space did give him more room to jump and dance and pace a bit. Even though I’d heard a few songs before going to see them, the intensity was still unexpected and that was gorgeous. They’re playing again at Kimo’s in March and I’m definitely going. 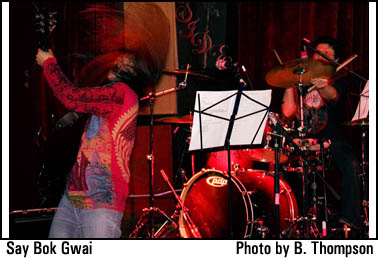 After the show my friend and I had just a wee chat with the singer and he seemed really nice. I love when people in bands that you dig aren’t total jerks!

Also, for some reason, when I see bands that I really like and there are about twenty-five people at the show, it occasionally makes me think of Madonna and her sold-out amphitheatres and people buying tickets from scalpers for $300 (and much more) a piece. Don’t get me wrong, I actually get kinda bummed when bands I like start playing at places that have seats (for heaven’s sakes) – not because I don’t want them to get recognition or anything like that, but more because you lose that beautiful small club intimacy. And, of course, I fully realize that one thing I love about bands like Hvorslev or punk in general is that the really good bands do remain outside the mainstream or under the radar or whatever. It seems like if it became too mainstream, well, I think we all know what happens then (ie: pop punk on the radio and Ramones shirts in stores in the mall that don’t even sell records). Anyway, all that aside, I can’t help but occasionally be wowed by the injustice of the whole thing.

Back at Thee Parkside, Say Bok Gwai (monkeykingrecords.com/sbg) was up next. Like Hvorslev, they, too, are from California. Unlike Hvorslev, they only have two members: a guitarist/singer and a drummer/singer. The guitarist sang the most, in vocals that sometimes veered too closely (for my tastes) into death metal. The music wasn’t death metal very often, though, sticking closer to regular thrashy and hardcore stuff. There were some times I thought of Motörhead, and they played a Slayer cover, which made me very happy. The singer, who is apparently Chinese, at one point gave us the name of the next song, the title of which was numerous Chinese (maybe Cantonese) words and then “Bush.” He then explained to us that it meant, “I hope you fall and crack your head on the sidewalk, Bush.” Fantastic!

Later, for a song the singer traded in his guitar for a saxophone, and the drummer played a bit of trumpet. There’s nothing like a spot of jazz interspersed with headbanging to mix things up a little. I got the impression that the drummer was not quite as proficient on the horn as the singer was on the sax, and he was much less proficient on the horn than he was on drums, where he seems to have perfected flawless posture at breakneck speed. 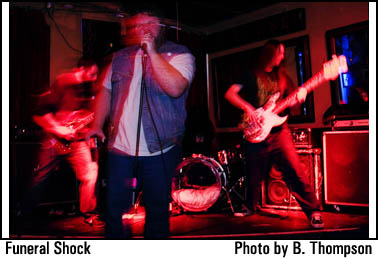 Funeral Shock was the last band up. Also from California, members are guys that apparently have relations with bands such as Spazz, Capitalist Casualties, Deadbodieseverywhere, and Wuzor. Quite a line-up, and one that may give you a clue about what kind of music they play. I liked the singer’s jean jacket/vest, which read “Loud Fat Rules.” Humorous! So they got right down to business, with occasional Black Flag-esque guitars, often very fast, intermittently bringing on the slow jam (although a tad bit more torturously heavy than that smooth R&B shite they play on the radio). I liked them! And after the first (or maybe the second at the outside) song, the singer said, “Was that sweet or what?” and I could only agree. It was sweet.