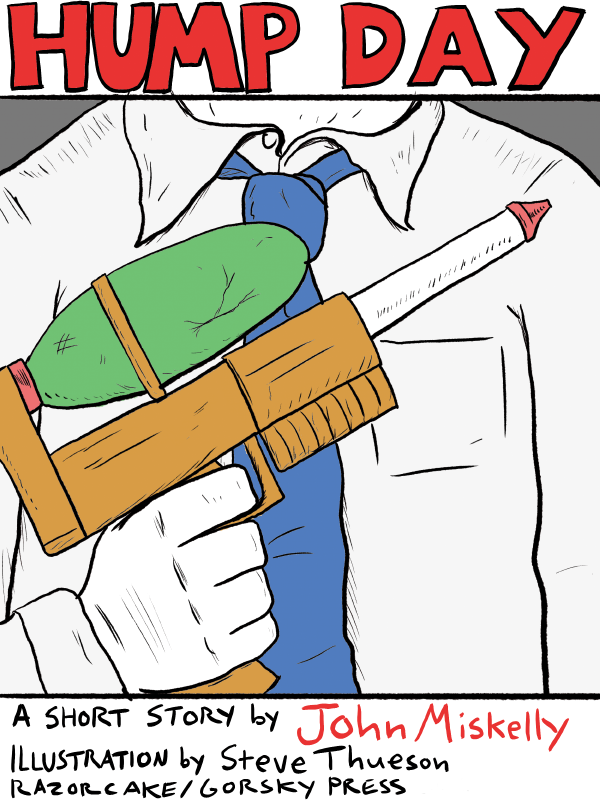 I always did it on a Wednesday—Hump Day, so called because in surviving that particular twenty-four hour cycle, you’re supposedly halfway through the working week. You’ve finished the upward struggle through maudlin Monday, passed another thankless Tuesday, and the weekend is in sight, save, of course, for Thursday and Friday.

This is bullshit optimism of the highest order. Firstly, it fails absolutely to recognize the possible clusterfucks that might befoul Thursday or Friday, the fallout from which might easily seep into the weekend, rendering them joyless continuations of the working week. Secondly, if you were to really take in the view from that hump, that proverbial hillock, what is it that you see just beyond Sunday? Hump Day is illusionary. Similarly, the weekend itself is a false idol, not an “end” to anything, but merely the prologue to another rotation of the perpetual hamster wheel of servile humiliation.

So that’s why I always undertook my low-level urban acts of dissent on Wednesdays. In this sense, they were pre-planned—a couple of pints in the boozer, then, on the way home, I’d pass on the traditional post-pub kebab and instead partake in one or two minor acts of vandalism. In another sense, though, they were fairly spontaneous—I never knew what I would do, only that I would do something. One week I might smash in a bus shelter. The next, befoul a piece of public art. Twice I entered an office block and set off the fire alarm. Once I called in a bomb threat to a supermarket. Frequently, I made prank calls to the police, or the media, or both, reporting a horrific accident pertaining to whatever hate group were that week’s new worst thing—IRA, al-Qaeda, ISIS, ETA, student radicals, the Stop the War Coalition. Once I tried to attribute a mass shooting in a bowling alley to The Red Army Faction, but the ignoramus on the news desk had never heard of them.

I’m aware many of you have studied my trial and will be aware of these acts.

I was the unaccredited star of many a CCTV masterpiece. But who suspects a be-suited, middle-aged, middle-manager with a combover and fastidiously polished shoes? Just try and picture it—the likes of me lugging a traffic cone from a freeway overpass into oncoming traffic, or a shopping cart through the window of a primary school minibus. An absurd image; more comical than criminal. I am, though, despite my age and posture, deceptively well-built, especially now, given my easy access to gym facilities.

I should emphasize at this point that I have nothing against the public, per se, and admit that my transgressions were (on a superficial level, anyway) self-indulgent acts of relief. But on a deeper level—and forgive me an air of self-important self-aggrandizement—they were small acts of civil disobedience against a banality of life I both depended on and loathe. Some people write angry letters to their MP. I smeared dog feces on shop windows—the latter is just as impotent as the former, but in terms of sheer catharsis, as I gather many of you have since learned, there’s no contest.

I was, according to the rules of conventional decency, comfortable. I had a secure job with a middling salary in a reputable company. I had a ten-year-old middle-range Ford hatchback. If I was so inclined, I could buy sundried tomatoes on an almost monthly basis, and, indeed, I did. Once, I even had a wife. But much like the paltry two-day respite we pathetically crawl through five days of shit to reach, they are scant consolation. I felt no freer in my middle-aged, middle-management role than the child of a low-income single parent. Save me your worthy references to the poverty cycle, the class struggle, the statistics about nutrition, opportunity, and whatever else. I’m not denying the tragedy of inequality; I’m just saying the kid without a PlayStation under the Christmas tree doesn’t have a monopoly on misery. With any luck, that kid will never know the stinging humiliation of talking to a meeting room full of glassy-eyed subordinates through another flip-chart’s worth of profit margins and quarterly overheads in a language so insulting to the average adult intelligence it offends the mind as much as any racist slur or swear word so far imagined.

As perverse as it sounds, I almost envied those at the bottom for their capacity of social movement; that ladder may be frayed and ragged and designed to break under their weight, but at least it was there in some imaginable form. I felt stuck on a narrow ledge—no chance of promotion even if I’d wanted it, barely the opportunity to move sideways. I was stagnant and stationary and out of ideas; the interest on my debts the only signs of a life still lived. My ex had largely cleaned me out of any savings. My passions were borrowed hand-me-downs from my more youthful self, and enthusiasm seemed the privilege of the young. Any attempt to “experience” new “experiences” never lived up to the pictures in the brochures. Life was reduced to a series of petty choices and responsibilities I couldn’t muster the motivation to undertake.

Suicide felt like too much of a defeat and homelessness too much like suicide, just slower and sadder. And besides, why be dead or homeless when there’s a place with a roof, a bed, and three meals a day—a place where those petty daily choices are made for you—all just one bold Hump Day gesture away?

I had not the first clue about how to get hold of a real gun (although I have an encyclopaedic source of information on those affairs in my current residence), so anyone coming to any physical harm was unlikely. Some psychological trauma was to be unavoidable, but I banked on a certain natural charm and years’ worth of disingenuous business patter to draw on in terms of the actual performance element. Also, I am not a prolific swearer. This helped keep things civil between myself, the family, and the cops.

In the end, as the court reports clearly state, this moral gesture was very nearly my downfall. I was too calm, too polite. I probably shouldn’t have paid for the Oreos I took from the pantry, which I wouldn’t have had to do if the cops weren’t so slow in arriving. God only knows what might have happened to that family if I’d been a real criminal with nefarious intentions, armed with a real gun and not just a painted Super Soaker jammed into my jacket pocket (a Super Soaker 30 for the pedants out there—the smallest one, with the bottle removed). But then, of course, a real armed robber wouldn’t have hung around for the police. A real home invader wouldn’t have corrected the son’s grammar, complimented the stonework in the fireplace, or taken off his shoes before going into the living room.

Clearly, the plan was flawed—I’ve never countered that. Although compared to some of my copycat admirers, numbering in the hundreds if YouTube is any measure, my plan was positively Oceans-esque—the guy with the sewage in the swimming pool, for instance, or the bank clerk with the paint bomb. I make no apology for inciting the conversation I started, but I’d like to reiterate again that I take no responsibility for those who my actions may have inspired.

The trial, as the public record will state, was beyond a farce. My calm demeanor and rationality during the fact nearly landed me in a padded cell. My defense lawyer, as he was trained to do and acting with the best of intentions, claimed insanity on my part. But my pride wouldn’t allow that. I came clean. The establishment press frothed themselves stupid with indignation. I was an ingrate, a moral coward. I was a traitor, a communist, a champagne socialist, a champagne anarchist, a terrorist, a sponger, an agitator, the enemy within, a dropout, a burnout, a copout, a nut. The left wing press weren’t much more sympathetic. I was trivializing the prison experience. I was trivializing real poverty, real hardship. Conspiracies abound concerning my “true” intentions. They could not, would not, even attempt to entertain the idea that anyone would opt out of the best system—the onlysystem worth contemplating.

I put the establishment into something of a Catch 22. I had broken their laws and offended their values, and they yearned to punish me according to their system. And yet there I was begging for—reveling in—the prospect of their perceived punishment. I feared I’d get nothing more than a few hours of community service. But how could all my combined crimes possibly add up to just a couple of weeks of litter picking? People were doing time for far less. How could they detach my individual intentions from the wider paradigm of deterrents, punishments, justice, and all those other abstract concepts? In the end I think I just wore them out. I got eight years—success. 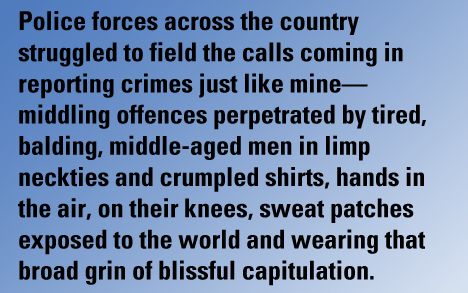 And then the letters started. Just a trickle at first, growing into an unmanageable torrent. It was the social media posts that really lit the tinderbox, though—public sympathy begetting public sympathy. I’m told I’ve started a movement. In the Wednesdays following my show-trial, police forces across the country struggled to field the calls coming in reporting crimes just like mine—middling offences perpetrated by tired, balding, middle-aged men in limp neckties and crumpled shirts, hands in the air, on their knees, sweat patches exposed to the world and wearing that broad grin of blissful capitulation.

And not just those from my own demographic—debt-ridden post-grads burnt out on unpaid internships, sick of answering to bosses who claimed kinship because they could identify that song or that line from that movie, but were, in reality, no more genuine than their ex-hippie, sold out parents.

And they all did it on a Wednesday. On Hump Day.

Prison isn’t exactly a walk in the park. But on the days when it’s tough, I find it helps to take a kind of Dickensian, anthropological perspective on things, to turn the whole thing into a sociological class study. Students pay thousands of pounds worth of gap year costs for “experiences” far less “authentic” and “gritty” and “real” than this.

Really, though, I’ve barely had any time to contemplate my incarceration, being as I’m almost permanently occupied with writing these columns and conducting endless interviews with every hip magazine and website from Los Angeles to Warsaw. Some of them are very good journalists, these youngsters, although I always get the sense they expect something more along the lines of a manifesto, something to suggest that this was an outward gesture beyond just satisfying my own needs and self-fulfillment. I emphasize that this was never about anyone else but me.

After the trendsetters come the thirty-something weekend broadsheet hacks—New York Times, Guardian, once even someone from the Wall Street Journal—but I’m told by my cellmate Keith, who’s since become something of an informal secretary, that that piece got pulled. Keith, along with the daughter of one of the guards studying patent law, has helped me copyright a line of merchandise—shirts and mugs and towels and stuff like that. Hopefully we’ll have them out in time for the summer sales.

John Miskelly is thirty, lives in Valencia, Spain, and has never been to prison, nor does he have any intention of going. Although, come on—three meals a day and a library? And no rent? And a laundry service? Just sayin’... More of his short fiction can be found on this same site. He tweets @johnMisk