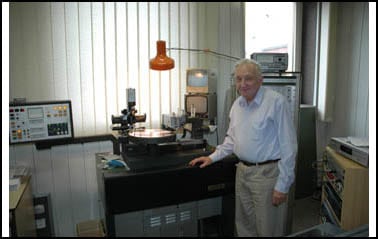 How Vinyl Records are Made: A Photo Essay of a Record Pressing Plant

Through a chain of events, my fiancé Mary-Clare and I found ourselves in Prague in the CzechRepublic. When I told fellow Razorcaker Donofthedead where we were off to, he asked, without missing a beat, “You going to the record pressing plant? Isn’t that where Pirate’s Press gets their records done?” I love my friends. They don’t say stuff like, “You must see the St. CharlesBridge. It’s darling at sunset.” They know what I like. I like vinyl records, punk rock, and books.

Don was right. Razorcake had gotten its inaugural two runs of vinyl (our Toys That Kill and Tiltwheel Sister Series) pressed at GZ Digital Media in the Czech Republic a little outside of Prague, and I was amazed that I hadn’t put two and two together myself. I contacted Skippy over at Pirate’s Press—who has a contract with GZ—and he was more than happy to set up a tour for us. He told us that we’d be shown around by knowledgeable, friendly Petr and James and that we’d be joined by Yosuke, a fellow Californian, who was getting a record pressed that very day.

Here’s a step-by-step tour of how a record gets pressed.

A record pressing plant is a place where an artist or a label sends pre-recorded media – ADATs, CD-R, Mini Disk, analog tapes (reel-to-reel) – for the sounds to be pressed on a vinyl record. Vinyl has unique properties all its own. It takes a special ear and eye to transfer those original sounds onto a vinyl platter so they sound as good as possible.

This man here is one of two “cutting engineers” who were working at the plant during our tour. We were told that there were a minimum of six engineers on staff whose main task is to cut a record.

Even though we didn’t speak a word, I liked him a lot. We were told that during Soviet rule, he mastered a lot of state-sponsored polka and pop music, and although this man had worked at the plant for a long time, their big gun -  Mr. Kuss who had been at GZ for over fifty years, and was a pioneer in the vinyl process - wasn’t on shift.

The cutting engineer’s job is to translate audio that was saved on another device and make sure that all the levels are correct to be replicated on vinyl. This is called “vinyl mastering.” 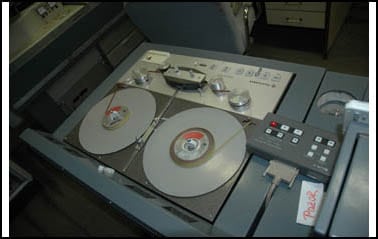 Transferring a CD to be mastered is just a bunch of 0s and 1s in darkness. Not much to see, so here’s an analog reel-to-reel tape that is being transferred to a vinyl master. 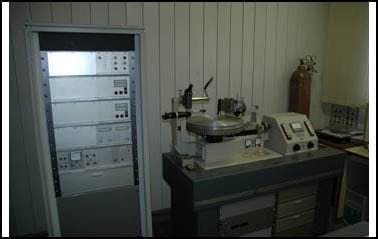 GZ has two different methods of cutting vinyl. The machine above that looks like a heavy-duty record player is a traditional lacquer machine. The first step in the most widespread record-making process is called “cutting a lacquer.” A stylus vibrates a continuous etching into a soft lacquer. That lacquer is then metalicized and used to mould the stamping plates. 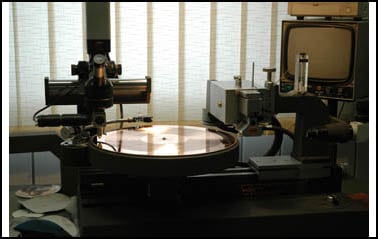 Above is a picture of a machine is capable of a much rarer way of cutting a record. It’s called a DMM machine. These were only available for a short span of time. When CDs were thought to bring the ultimate end to vinyl, only a few businesses made the investment to cut a couple steps out of the vinyl-pressing process that would improve the sound quality. A DMM processor carves that metallic (copper) plate directly, using a diamond stylus. It, literally, plays the sound waves onto the plate.

In the photo, on the platter is a just-cut master. If you look to the left of the copper platter, there’s a microscope. This is used to take a close-up view of the grooves that were just made to make sure there are no defects, that the grooves have all the correct physical qualities for a good-sounding record. 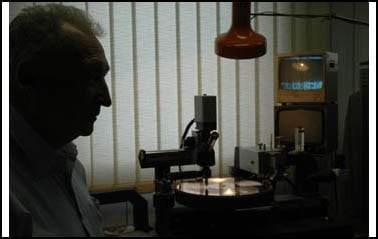 On the monitor on the right, if you look closely, it is showing you a microscopic view of the grooves on the master disk. (It’s reminiscent of Big Drill Car’s cover of LP Type Thing.) 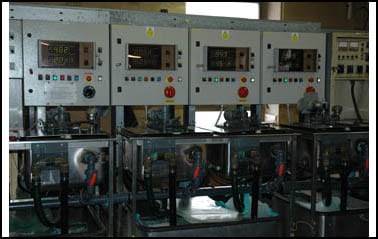 Since the master plate is relatively fragile and, at this time, is the one and only “sound template,” if it breaks during a pressing run, there would be no backup. So, many record pressing plants make what is called a “father.”

The father is made by taking the etched copper master disk and coating it with a layer of silver. Then the master is electroplated with a precise, thin layer of nickel in these machines. This thin layer of nickel (which also looks like a shiny record) is then separated from the master disk. What is produced is an exact negative of the master. This disc is called the “father” plate. (Think of the master as your hand. Electroplating is mud. When you press your hand into the mud, the exact opposite impression of your unique palm and finger lines are impressed into the mud. That mud with your handprint in it is analogous to the father plate.) 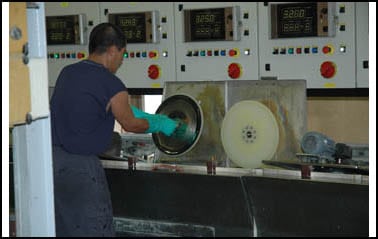 The father plate is, in turn, coated with silver and electroplated and a third plate is made, called the “mother plate.” The mother is a duplicate of the master. It can be played on a record player. The beauty is if it breaks during the pressing run, another one can be made from the father.

For smaller-run projects, (under 11,000 records or so), the father plate is converted into a “stamper” and the mother is shelved for future use. One stamper can produce about 1,000 vinyl records. 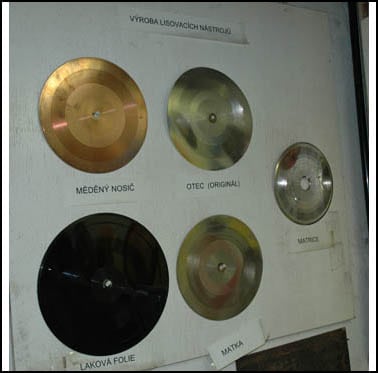 Here are the different types of plates that are produced during a record-making process.

Bottom left, “Lakova folie,” is a lacquered foil, an example of a master made without the DMM process.

Far right, “Matrice,” is a stamper plate, to what looks like would be a big-hole 7”. It’s actually a standard 12” plate. The DMM and lacquer plates are 14” in size, which allows for a small amount of manipulation around the edges while lessening the risk of defective grooves. This is then trimmed down to 12”. A flat pin with a spindle is placed in the big hole to hold the stamper onto the press. 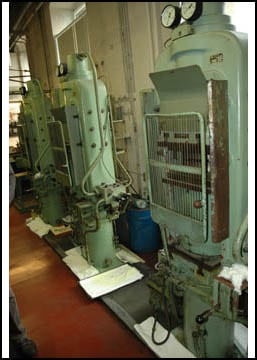 These machines trim the excess metal off of the plates. 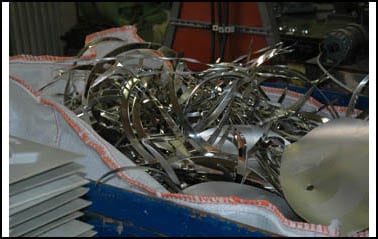 If anything goes wrong with the mastering or plating processes, these plates are put aside for recycling. (Also shown are the shavings of metal excess originally trimmed from the plates.) 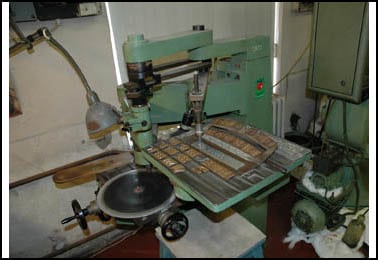 In the middle of a record, right outside of the label in the middle, in the “dead wax” area, there is most often a “matrix number” (for instance, a catalog number, so the pressing plant can match stamper plates to the proper paper labels) and/or some words inscribed there. (Like, “Play for John Cage cover” as The Tim Version did in Decline of the Southern Gentleman.) This machine etches the inscription of human-sized type down to Lilliputian-sized type directly onto the stamper plate. 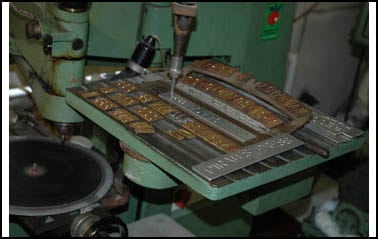 As you can see here, “PIRATES PRESS” is about 1-inch tall type, and in the background (to the right), you can see type set in a curve that mimics that of a record. In the background, to the left, is where a plate would be placed to be etched. 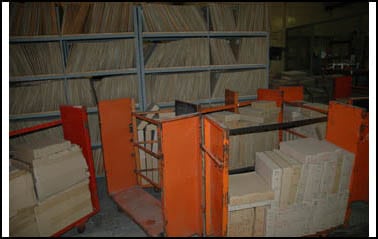 Vinyl records, as of 2008, have experienced resurgence in popularity. Vinyl record production has tripled in the past two years. Here’s a picture of just some of the mother and master plates at the warehouse. Remember, these aren’t the full runs of records, just the plates that make entire record pressings possible. 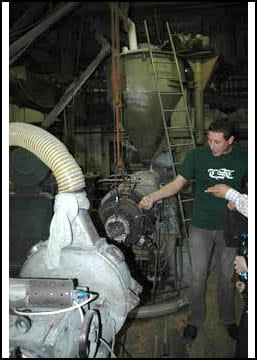 So, at this point, the record plate is ready to get pressed. Next comes vinyl. Vinyl starts off in small beads that are about as big as food pellets for a small animal. These pellets are fed into a large hopper (at the top of the photo) into a machine called an “extruder,” which heats up the vinyl beads and Play-Doh’s them out in a stringy, solid mass. This spaghetti-looking mass will eventually become a record. 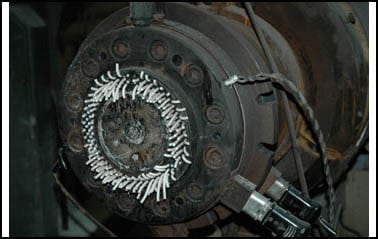 Here’s a close-up of what comes out of the extruder. It’s the beginning of white vinyl for a record. 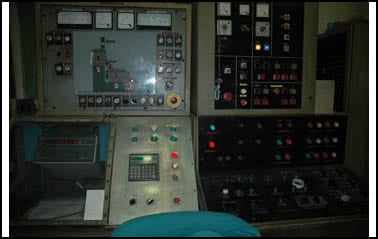 Nope, this isn’t a secret soviet missile command center. This console oversees that the extruder is behaving correctly. Much of the technology used at this facility, dealing with the pressing of records, hasn’t changed dramatically over the past fifty years. 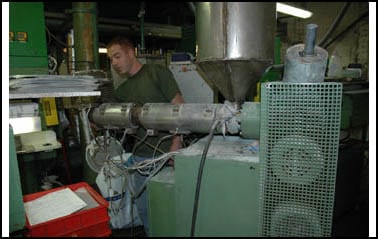 From the extruder, the vinyl is transferred to this machine, which precisely measures out the amount of vinyl to be used for the different sizes and thicknesses of records. It makes pucks. 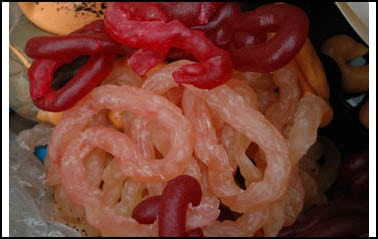 Nope, it’s not entrails… or poop from a unicorn that tastes like gummi bears. These thick squiggles are the first bits of vinyl out of that machine before it reaches its proper operating temperature. These bits are recycled into other things beside vinyl records. 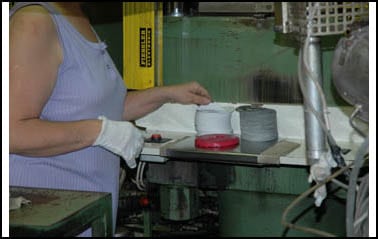 The red, donut-looking glob is what vinyl looks right before it’s pressed. It is in the middle of two stacks of labels, an A-side and a B-side. This record will be a 12”. 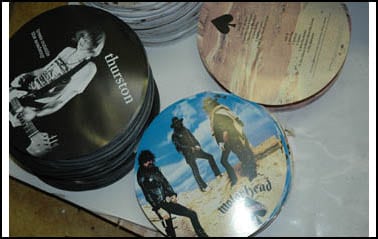 As an aside, if you’ve ever wondered how picture discs were made, they’re pre-printed labels pressed in between clear vinyl. And yes, it’s a gratuitous Motorhead shot. 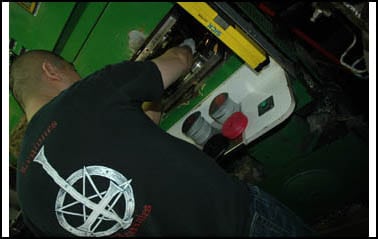 A label is hand placed above and below the vinyl glob. Then the record is placed in the press. 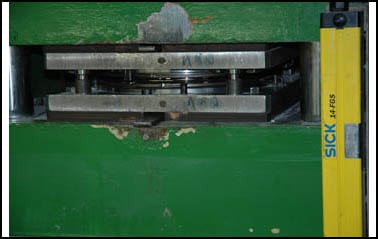 It’s a couple seconds of hot action. It’s also a lot of pressure. Over 110 tons, my friend. 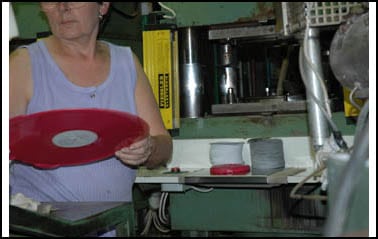 After the record is removed from the press, it is placed on a trimmer. (You can see the “flash” around the outer edges of the just-pressed record.) 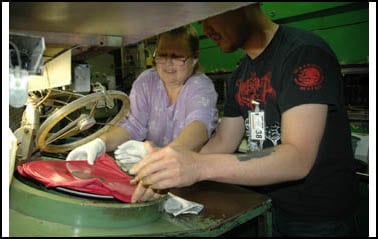 Here’s an action shot of the excess being trimmed. That halo-looking device clamps down and does the cutting. 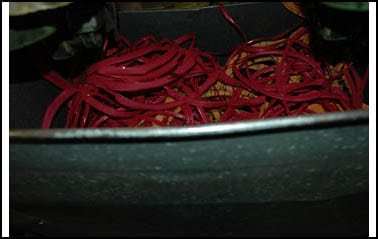 When you hear the term “virgin vinyl,” one of the meanings is that the record is solely made from vinyl from the original beaded form. Some record pressing plants will melt the scraps cut around the record’s edges and re-used that vinyl. That effectively “de-virginizes” the vinyl. GZ was emphatic that these scraps were not re-melted and reformed into future vinyl records. GZ also told us that all of the recycled vinyl, metals, and chemicals—while not reused nor recycled internally—were sold externally to other industries where the integrity of their compounds wasn’t the materials’ main consideration. The record processing plant is able to make some of the money back on what would be wasted materials, which helps keep costs down, as well as lessening the environmental impact of vinyl record production. 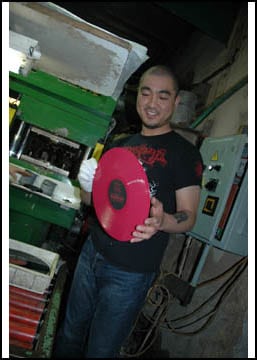 Viola! A freshly pressed record, literally hot off the presses. Our fellow record plant tour-er Yosuke literally got to press his very own Nuclear War Now Productions record. Not many people can say that. 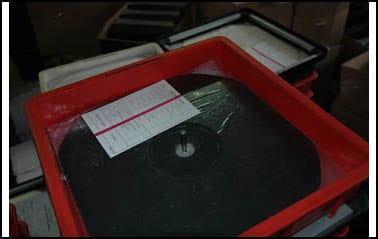 Since the records are still warm and susceptible to warping, they are put in custom-fitted boxes and covered with record-shaped weights so when they cool down, they remain absolutely flat. 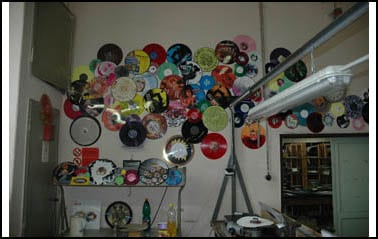 And there you have it. Records rule. CDs, MP3s, and whatever brain implant/upload is coming next, just can’t compare to how great records look (and sound), even when they’re just glistening black. Hope you enjoyed the tour.