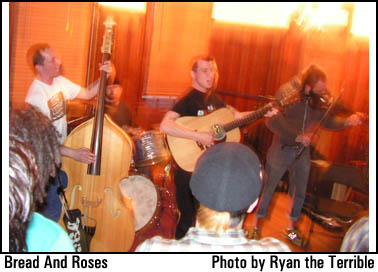 How To Book A Razorcake Benefit: By Ryan the Terrible

I book shows. It’s what I’m good at, I guess. And my buddy Renee knows that. Renee came up to me a few months ago and was all, “Hey Ryan, do you wanna do a benefit for Razorcake in Boston with me?” Something went off in my brain and I was just like, “Yes. This will be sick. This will be so sick that people will throw up.” Surprisingly enough, the following day I saw a dude throw up while just standing there. So, maybe that show made him do that even though he wasn’t there, but who knows. I don’t. What I do know is that booking the Boston chapter of the Razorcake Benefit shows was pretty all right. 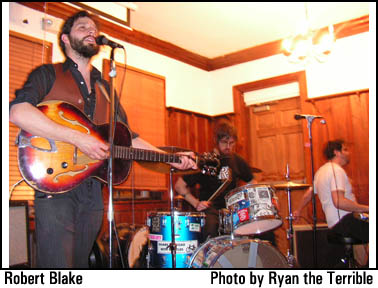 Shortly after Renee and I talked about this, I started thinking of what bands I wanted to see. That’s my reason for booking shows. No one books the bands I like or they don’t book them enough. So yeah, I’m selfish and I wanted to see some bands. So, I asked some. Renee was a bit bummed out that I did all this while she was out on the road, but deadlines needed to be met if we were to secure the space. It just so happened that my roommate’s bands, Bread And Roses and The Serious Geniuses were coming home from their first tour together mere days before this show with nothing else to do but rock my face. Well, Bostons face really (Cambridge if you get down to the semantics but I don’t wanna). So, BAM, we have 2 bands. Then we asked the lovely Bridge and Tunnel, who, when they were in town last time, were some of the nicest best people I ever spent way too much money on at the bar (Pat doesn’t drink he just sits there and rules the whole time). It’s odd, but yeah, they were down. I then asked The Closet Fairies because, well, I can’t lie, I love that band something good. I think that may have been the first lineup. So yeah, we got it. Sick lineup.Cool.
Until I got word from the venue that the head booking agent gave away the hold I had— even though I’d confirmed everything—we had the great all ages space in Harvard Square. Rushing to secure the deadline did nothing as the head space lady wanted to have a night to hang out with her friends. There was new option the following day. Everyone was totally cool on the local side, but Bridge And Tunnel have a conflict and can’t make it. And I gotta say, I was a bit bummed I wouldn’t be getting to see some people who I may have only met once, but were pretty great. Now we’re onto phase two, and I’m like, “Man, that was a great show that I had lined up, but now I have to top it? I have to make this show even better because the great one bailed? Who am I going to ask? Who else do I love? 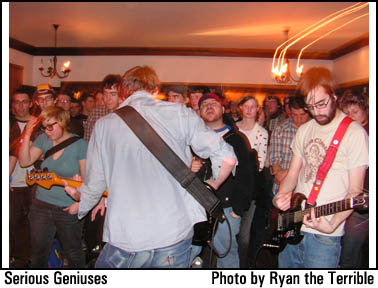 For Science. I can’t say I’ve seen a band I’ve liked as much as when For Science played at my friend Pat’s basement in Allston the previous weekend or so. Their records are good and shit, and they get good reviews in Razorcake; so, they’d probably do this, right? Shoot some e-mails, confirm things with Brian, and presto, I have For Science on the show. Great, they asked for some gas money, and I was excited. However, Brian tells me that they wanna bring someone with them, someone everyone likes, and lo and behold, they mean The Ergs! It took a while to get a confirmation on this, but, man, knowing that it was a possibility made me just like wow!!!
Renee had vented some frustration at this time about me booking it all and I apologized, but that’s how I know to do a show. Plus, she’d been working on the business element with Todd. In a way I thought we were working as a team. I’m apparently just the ball hog on the team. 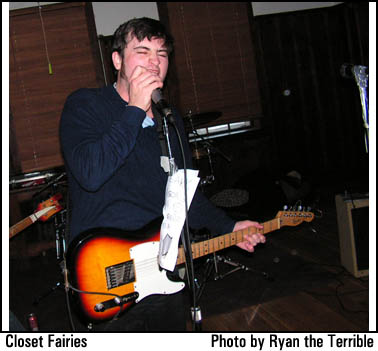 Now flyers were being made, plans for the PA were getting made, and more things were happen. Alex of Art of The Underground contacted me to ask if I could set up a show for Robert Sarazin Blake on March 29th or 30th . I answered with a quick “Hah! Yeah, I totally have a show for him.” As Alex is friends with The Ergs! and Robert is friends with Bread and Roses, it just made sense. But now we had the dreaded six band bill, a curfew of 10PM, and about three hours for six bands. “This could be a nightmare,” I thought.
Two weeks before the show, The Serious Geniuses find out they can’t go on tour. Someone is mad at someone; someone is sad about that, and I basically dunno if they can play. Being as they are one of my favorite bands, I get worried about it. But I’m still promoting it with them on the show. When I say promote, I basically tell my friends, who tell their friends, someone posts it on a message board if I haven’t already, and Jeff from The Closet Fairies made a flyer that may or may not have said “Fuck the Beatles” on it.
Two days before the show, the PA I had lined up was being seen as unreliable. On two days notice, I need to get a reliable PA. My friend Pat in the band Female Trouble has a PA, what if I ask him? He agrees. I’m all, “Sick, I’ll get you a 30 rack.” (I still owe him that 30 rack.)
Day of show, I’m all nerves. I am like that at every show I do, and I set up a lot of shows. But those are mainly at bars. This is at this great all ages space, something of a rarity in Boston, but what if it runs late and it gets shut down? What if no one pays (we can’t force anyone to; it’s donation only) and I can’t pay the bands/donate to Razorcake? What if someone breaks all the windows and I get stuck with the bill? What if kids get drunk and cops come? So yeah, I’m pacing, I’m walking, I can barely enjoy the bands of course the show starts late. I’m chain smoking while trying to get people to donate more than five bucks. Hell, I’m trying to get people to donate $1, and that’s hard. Then Renee saves me and does the door the rest of the show.
I’m so busy stressing that I don’t even really talk to the bands before they play. But I calm down once I talk to Michelle at Papercut. She said that if it runs late, it won’t be the end of the world, that the kids drinking were doing it pretty discreetly, so I couldn’t really say anything, and that the kids were being really respectful of the space. I get up front and sing along to some For Science songs because I finally can calm down. I wish I had been able to enjoy the first time watching Robert Blake with a full band, I am pissed I couldn’t enjoy all the funny names people were calling Paul Cummings during The Closet Fairies set, I wanted to be up front during The Closet Fairies, and be a part of the dancing sing along for Bread And Roses. But I got to sing along to my favorite For Science songs in a mostly still room.
When The Ergs! took the floor, I couldn’t get close enough. I couldn’t even take a picture. I sat in the back listening to some of the best punk songs I’ve ever heard, sang along with every one, and let the kids go crazy. I’d done shows at the Papercut Zine Library/Democracy Center before, but this was something else. The place erupted. The kids sang, swayed, jumped, pushed, and surfed basically as hard as they could. After they played, I paid out the bands what we could; Renee took care of taking the Razorcake benefit portion of it. I talked to John from For Science for a bit, dude was real nice, talked to Mikey Erg, and again, you can’t say anything except that those guys aren’t the nicest people. As they broke down their gear, made their plans where to meet up, where to sleep, where to get drunk, etc, I was sweeping, shaking hands, and cleaning the space.
Afterwards, my girlfriend, Steve (roommate, Bread And Roses guitar player/heartthrob), Matt (you prolly don’t know him), Patti (the ladyfriend of Dan from Bread And Roses) and myself went to Charlie’s Kitchen, where Steve and I did shots of Wild Turkey and chased ‘em with Pabsts while talking about the show. Sure, it’s a lot of work to set up shows. Sure, it’s a little strange doing a benefit for something that means a lot to you but is 3000 miles away. (I’ve never met Todd! I wanna, but I don’t travel, and I doubt he’ll come here. Fuck, I wanna meet Davy Quinn, Rev. Nørb, and Ben Snakepit too!) Sure, it’s stressful and you don’t usually get much out of it, but that night, I got a lot of beers bought by not a lot of people, and damnit, that was one fuck of a show and a ton of people liked it. And the bottom line is, everyone who was there had a great time, I got to hang out sorta with some bands that I love, and I got to help out a zine that I love to read!