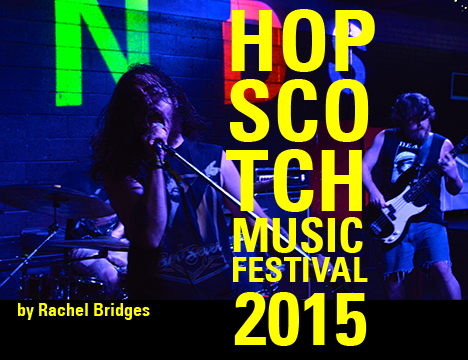 If you’re not from North Carolina, you’ve most likely never heard of Hopscotch Music Festival. Maybe you do live in North Carolina, and you still haven’t heard of it. Stemming from the state’s vibrant music scene, Hopscotch is one of the newest premiere festivals for underground artists of all genres. I was lucky enough to attend it this year, from September 10th-12th.

Hopscotch was created in 2010 by Greg Lowenhagen of the Independent Weekly, a popular newspaper based in the Raleigh area. Hopscotch sets itself apart from other festivals because of the fact that almost all of its artists are independent and underground, and they span across many genres. Local artists are heavily represented as well, and the festival is the brightest weekend of the year for the North Carolina music scene.

The festival is held at twelve venues in downtown Raleigh, ranging from the giant City Plaza main stage, which is at the end of one of downtown’s central roads, to Slim’s, a dive bar that has about a one-hundred-person capacity. The bar-crawl set up of Hopscotch takes away the tiresome “festival-ness” that often accompanies being sweaty and sunburnt, stumbling through a giant field. The farthest distance between venues is less than a ten minute walk. My only complaint regarding the set up of the shows is the fact that artists of the same genre often ended up playing at the same time, forcing you to choose which one you wanted to see.

Last year, Hopscotch also introduced the Hopscotch Design Festival, where designers of all disciplines met up to collaborate and discuss new methods of innovation in design. This is yet another aspect of the festival that sets Hopscotch apart from others; so much of it revolves around collaboration—between artists, local residents, college radio stations, local businesses, and more. The music variety and excellence alone is enough to put Hopscotch on the map as one of the best festivals going on today, but the additional aspects make it unbeatable.

In addition to artist collaboration, Hopscotch is inclusive of music lovers across many genres. As festival prices go, Hopscotch is on the cheaper end of the large-festival spectrum. Admission to all three days of the festival this year was $165, and single day admission was $85. For those who can’t afford admission, the paid part of the festival runs from 7:00 p.m.-1:00 a.m., but the same venues host free day parties. Mainly local artists perform during the day parties, and they’re sponsored by local businesses and organizations.

This year my favorite day party was the WKNC/WXDU/WXYCDay Party at Kings Barcade and Neptune’s. WKNC, WXDU, and WXYC are the student radio stations for NC State, Duke, and UNC, respectively. They host a day party between two venues, which are both in the same building. Neptune’s is in the basement, and Kings is right above it. Kings is by far my favorite venue in Raleigh, and I got to see one of my absolute favorite local bands Museum Mouth, a pop punk trio from Southport, NC, play there. 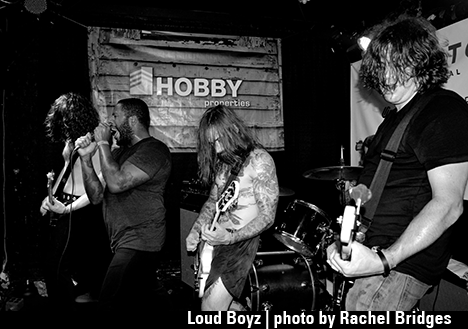 I spent most of my time during Hopscotch at Slim’s. Slim’s has a capacity of around one hundred—the stage is scarcely bigger than a king-sized mattress. This year I saw Loud Boyz, a punk band from D.C., for the first time. They were the most energetic performance I saw all weekend; the singer’s demand for a circle pit in a ten-by-ten foot area crammed with at least twenty dudes was a little bit outrageous, but in a good way. 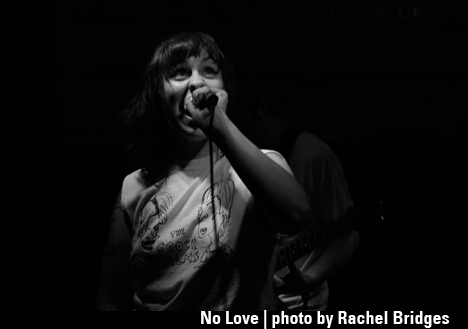 Immediately following Loud Boyz was No Love, a punk trio from Raleigh. No Love is vital to North Carolina’s music scene in many ways. They performed at WKNC’s Double Barrel Benefit concert last year, which is the station’s annual benefit to raise funds to keep the station going. Furthermore, their guitarist Daniel Lupton is an English professor at NC State and the founder of Sorry State Records, a punk label out of Raleigh. 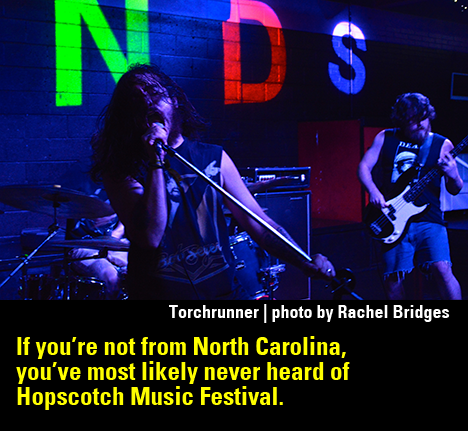 On Friday, I saw Torchrunner perform during a day party at Legends Nightclub. Based out of Greensboro, Torchrunner is a grindcore band that’s been around since 2010. I was really looking forward to seeing EYEHATEGOD but they cancelled at the last minute. Iron Reagan filled in for them, and they were excellent. On Saturday I got to see the legendary punk band X on the main stage—Billy Zoom was unable to perform due to illness, but they were still incredible—but the last band I saw was the one that I had been looking forward to the most. Hank Wood & The Hammerheads are a garage punk band from NYC, and they played at a max-capacity Slim’s on Saturday night at 12:30 a.m. 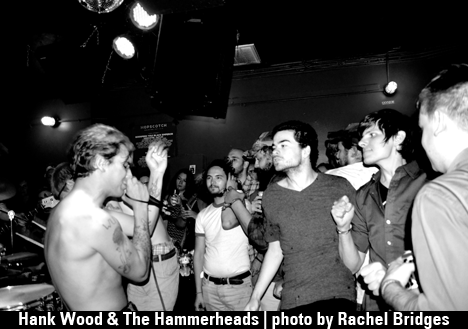 Hopscotch is always my favorite weekend of the year. I’ve lived most of my life in Raleigh, and the vibrancy that the festival has brought to the music scene and the area is immeasurable. It’s more than just a music festival to me, and to so many of the people who are a part of it or attend it.

Rachel Bridges is a freelance journalist from Raleigh, North Carolina. Follow her on twitter @_rachel_bridges, or email her at [email protected]