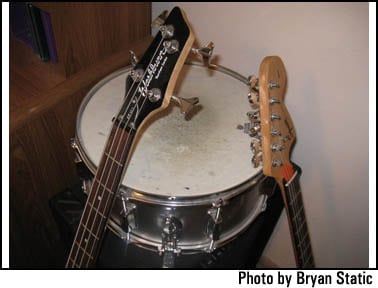 “That’s a NOFX song.”
“No, it’s not! I wrote that!”
“No, dude, that’s NOFX.”
Fuck, he was right. Note for note, that was a track off Ribbed. It’s been a few years, so I don’t exactly remember which one.
“Fine, whatever. Let’s try the first song again then.”
It was just Chris and I stuffed into the bedroom he shared with his younger brother. We’d been a “band” on and off for about three years. We’d been playing instruments for one. We went through more band names than the protagonist of King Dork. At the time, it was either American Riot or Drive By Arguments. The one song we had down was a ripoff of an Anti-Flag song that, in retrospect, wasn’t even catchy. Seventh graders trying to play punk rock is one of those shameful memories that I’ve tried to put in the closet with my mohawk and Casualties records.
Chris had got his bass last Christmas and I got a guitar from my dad’s friend. Originally, he lent us a red Fender Squire, but we traded it to him for a white Fender with more pickups. Before we had a chance to return the guitar, he skipped town because of drugs. I don’t recall if he was selling drugs, or doing drugs, or being chased by drugs, but we haven’t seen him since. There was no drummer.
We began pounding out the song. Our two amps combined had enough power to override the sound of a mechanical back massager, but to our virgin ears the cacophony was deafening. Chris had plugged in a strobe light to make sure we were fully disoriented when playing the song. I mean, if we can’t get drunk, we might as well have no idea where our fingers go to simulate it, right?
It was the first real song I ever wrote and I was proud. I still remember spending the night at Chris’s house trying to think of words that rhymed with “hypocrite.” (If your answer is “shit,” minus five points.) The song remained in limbo, however. I think we got up to the chorus and then gave up for the day and retired for a session of Nintendo 64.

Just a few steps away, but months later; I began jamming with Chris’s brother, Remy, on drums and his friend, Richard, on bass and vocals. We started a metal band. Now, let me just say it’s not as bad as you think. It was worse.
We didn’t really have songs of our own. We just played one cover. A lot. It was Nirvana’s “Smell’s Like Teen Spirit.” No, dude, we were totally a metal band. We had, like, double bass and everything.
Our name was Dark Spiral and as soon as I joined I promised to grow my hair down to my ass. Our main songwriter listened to four bands: Metallica, System Of A Down, Korn, and Nirvana. All the songs he ever wrote were made on a MIDI program. (If you aren’t technologically suave like I, MIDI stands for Musical Instrument Digital Interface. It’s how most synthesizers recreate instrument noises.) All I had to learn my new band’s songs were rough estimations of what they would sound like as a cell phone ringtone.
Drums were new to me. If I thought I was going deaf with two amps, then I probably thought I was going to die now. This symphony of discord also came complete with a vocalist who thought he could scream. Funny thing about when you don’t give your band mate an honest opinion: they just keep doing stuff badly.
When we weren’t practicing, I would dream about the band’s future. Shows, albums, tours. It seemed so close to reality I could almost taste it. I was confident that we would always learn an original next practice.

“And that’s where I go dunadunadun?”
“No, more like… dun-dadun-dadun”
“Okay.” Four clicks and the sonic blast began.
I was on drums. This time, the rogue’s gallery included my friends Adam and Enrique on guitar and bass respectively. The equipment was rough and primitive, but this time it was supposed to be that way. We were some sort of hardcore punk band with no real agenda other than “make some noise.”
The drum I was playing on used to be Remy’s, who sold it to Chris and then I bought it from him for 140 bucks and a few NOFX CDs. The cymbals were pretty much the equivalent of beating on a thin trashcan. The amps were badly beaten and bruised and were both doubling as quick-fix PA systems.
Scared from the defeats of over six failed bands (that I remember the names to), I no longer cared if we made it big. Now, all I cared about was at least getting a real song down and playing a show. The first dream was accomplished in about twenty minutes into our first band practice.
This was the first band I was in that felt more like fun than work. We never really did break up; it was more of a gradual drifting. By the time Adam wanted to practice again, I already busy with my new street punk band, Drunken Soldier.

The big local rock club is a place called The Sanctuary. Or it was. It was a gay bar for a while after they were shut down for selling liquor without a license, and now they’re either a rock club again or a European dating service.
Drunken Soldier just played their seventh show. We were opening for the Vibrators. The show was shit for us. Jerry forgot his ride cymbal. My brand new bass amp blew out during mic check, and Chris’s mic shut off halfway through the set. We tried to keep a happy outward appearance, but we were all pissed off at each other for various reasons. It was mostly a combined hatred Chris and I had for Jerry, who could never remember the damn songs.
After we tore down, I quit. I don’t know what made me think it, but I thought that playing shows really would have made me want to stay in the band. I started hating street punk after our third show. I don’t even listen to the stuff anymore. I wished them both the best of luck and they were back to playing shows two months later.
A year and half passes and now I’m in my garage with Emily and Devan. We have no idea what we’re doing, and part of me likes that. We write some songs on the spot and hope something clicks. We’re not rushing anything. This lineup might not even work out, but for now, it’s fun. Who knows? Maybe when we’re old and bitter, we’ll drunkenly play one last set. I hope I’m still punk when I’m old.