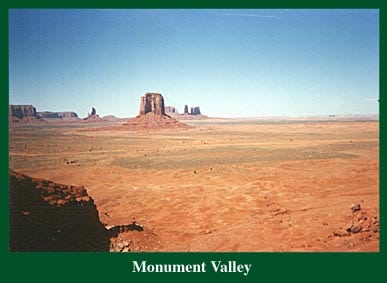 History: or What Happens to People after the US Military Frees Them

My friend Kerry wrote this article for a book of essays about September 11, 2001 (Through Our Words). In light of Colin Powell's recent remarks about holding the oil fields of Iraq "in trust for the Iraqi people" and in light of Bush's recent remarks about attacking Iraq because they've broken treaties, I think it's appropriate to reprint Kerry's article. The pictures that accompany it are two places on the Navajo reservation that the US government forcibly took over through a series of wars and broken treaties, two places that the US government continues to "hold in trust." -Sean Carswell

Flagstaff, Arizona - Rarely, if ever, have I put into real words my thoughts on this country. Adding thoughts on a terrorist attack as well makes this a huge task that I am not sure I am ready for. In my old age (twenty-seven years at last count), however, I have discovered that I do have a voice and while it is a small one, it deserves to be heard.

My sympathies and deepest apologies for the people who lost their lives or lost loved ones in the events of September 11, 2001. I can empathize with losing someone suddenly and unexpectedly, but not violently; My sincerest regrets. Loss of life is the hardest trial to bear and violence the hardest to understand. It is not unique to see people pull together in times of crisis, but it is always uplifting. The beauty of the human spirit is truly a miracle to witness.

It is with no small amount of guilt that I voice my opinions. Guilt because I have family, close family, who have served in various arms of the United States military. I have great uncles who were Navajo Codetalkers, a grandmother who was an army nurse, you name it, I've probably got it. They all chose to fight for this country for reasons known only to them. I almost joined the Army myself ten years ago and my brother the Navy. Needless to say, in the end we didn't. I often wondered why sometimes, I was so close to becoming Army personnel that I opted out.

In the last few years, more like the last eight or nine that I have been in college, I have come to realize that the Army was never my place to be. I quit saying the pledge of allegiance in the fourth grade, for God's sake. This country truly is not my place to be; it never was. I am conflicted because I live here, I was born here, but I am part of that invisible sector of society that only gets press when something bad happens or when we threaten someone's water rights, land rights, research rights, or any other rights inalienable to the rest of the nation. In a border town like Flagstaff, Native Americans are either drunks or sell outs. There is no in between.

How does this relate to the events of September 11th? My history is not filled with the glory of "our founding fathers," my history is not that of Buffalo Soldiers, or the Union Army. I fall on the side that lost. My history is fear of U.S. Calvary, massacre, slaughter, and reservations. Spoiled meat, thieving BIA agents, dead mothers and children, hundreds of miles of marching, lost language, fragmented culture, and a way of life I never understood before it changed and disappeared.

With this in mind then I can say that the hyper-patriotism of today is making me ill. I cannot be unified with this country because it was this country that tore my life apart before I was born. There is no time to be a part of a country when my nation is dying of diabetes and has the highest suicide and homicide rates per capita in this country. Those men who you see on the street begging for change to buy a drink or to buy food or to get a bus ticket, those are my uncles, that is my family. My brothers, my grandfathers, my uncles, and my fathers are dying because they have no place to belong. They turn to alcohol to connect with each other. My sisters, my grandmothers, my aunts, and my mothers are breaking under the pressure of raising a family because the men are hurting and no one will help. They turn to violence to control their lives and their kids. So, what are my roles these days? What keeps me from being an American? When I don't get service in a Flagstaff restaurant, or a car dealer cheats my father, or the police arrest and handcuff my sister in front of her kids (a mistake, did they apologize? Give you one guess), I am reminded that I don't fit, that I am unwanted and that most of the U.S. either doesn't know I'm here or wishes I would disappear. There are few options for someone whose mother died of alcoholism when he was young (a young man I met this summer). A few of us try and a few of us make it. I don't have time to be an American; I have to teach my niece and nephews, brother, and sister that they are worth the very air that gives them life. So, when I am expected to be at patriotic rallies, condemn Osama Bin Laden, or wear a little flag pin, I cannot help but be frustrated and I cry inside. Part of me feels guilty for feeling this way; the bigger part of me feels an animosity reaching far back into my youth.

I don't hate, I truly don't. I try hard to see the truth and goodness in everyone that I meet, but every time I see a United States flag flying from a big 4 X 4 truck or pasted in a store front window, I feel angry. I will give blood, I will give money, and I will be a shoulder to cry on but don't ask me for unity or solidarity. I cannot support a war or an attack on a country decimated by drought and civil war. If the United States attacks Afghanistan, they will be attacking women and children. In the early morning hours following a Ghost Dance, the U.S. Calvary attacked sleeping women and children. Six Anglo men with bowie knives killed an entire tribe of people following a ceremony on the north coast of California. I could go on and on and on but suffice it to say that attacking Afghanistan smacks too much of history for me. 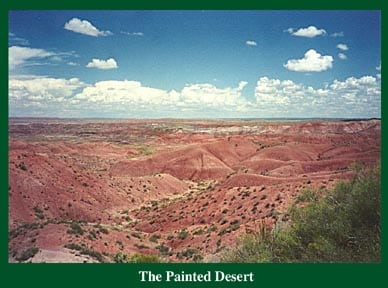 Maybe those men who flew the planes into the World Trade Center and the Pentagon had had enough. Maybe they were tired of being at the mercy of this country. The United States could not meddle in everyone's affairs without feeling some backlash forever. To blame Islam is a travesty; to blame any Middle Eastern person is to point the finger away from the very cause of the problem: U.S. policy.

A prayer from my tribe that the United States and its people find peace and beauty in the face of this anger and pain:

Kerry F. Thompson was born in a small town in northeastern Arizona almost 28 years ago and was raised in an even smaller town on the Navajo Reservation. She is the descendant of Irish plantation owners, German farmers and Navajo sheepherders. Culture, people and music are her first love; archaeology her second. Travel, poetry and politics keep her brain active and, so far, writing has panned out to be her best form of expression. She has five kids, aged 11 months to 6 years, who she "adores immensely and hangs out with frequently." (They are actually her nieces and nephews!). Kerry likes to paint, color, draw, clean house, take pictures, and when she's not being a wuss, run two to three milers per day or take her kids for a hike. Most of her time, though, is spent working, writing her thesis, teaching and excessively talking to her roommate and friend, Reed. Her plan for saving the world? "I want to teach college kids that there is a whole world of people to meet, and I want to teach little kids that they're people, too, and to question anyone who demands absolute authority (especially their parents!)." Kerry wrote her essay around the end of September. It is titled, "History."