It Came From Left Field is a traveling three-man show of outsider art (if you can call it that in the face of, ahem, three MFAs) with strong Mississippi connections. I’ve seen the exhibit once before at the softly-lit, polished-wood Hub-Bub in Spartanburg, South Carolina. Maybe that’s why, when Ming Donkey and I finally exited the Hollywood Freeway close to sun-up Thursday morning, after driving over thirty hours with a U-Haul in tow, I felt okay about sleeping in the gallery. Maybe that’s why I was surprised when we stepped from a sidewalk (where the iron-reinforced doors say more about the neighborhood than the connotations of its newly trendy name) onto a dirty tile floor awash in fluorescent bulbs. But it was 4am, and curator Walt Gorecki was waiting in nerdy-hip business attire with a big grin and big glasses, despite the fact that he had a 9am clock-in at his paying gig, the Getty.

My hesitation was a blip—lasting as long as it took to spread cargo pallets on the floor and toss sleeping bags on top—because the next day, as Ming Donkey, in his Old Haunts tee and months-dirty jeans, shuffled heavy wooden panels and puzzled out an installation, I realized that L’Keg is perfect for this trio of punk rock Southern boys, with their skint-knee pasts and comic book psyches. Turns out, Leticia Liesman founded the nonprofit art space because she wanted somewhere for her band to practice and her friends to play. And Friday night’s opening was as homey, rowdy and jubilant as these inauspicious beginnings would suggest.

The art was political, personal, accessible and engaging. Herb Rieth’s collages are stunning—haphazard bits of tightly stitched cloth painted with abstract forms that manage to be both organic and cartoonish, and landscapes that are simultaneously Mesozoic and post-apocalyptic. Jason Baldwin’s work is utterly personal and universally familiar, layering Playboy bunnies, Fantastic Four characters and evocative bits of text. But Ming Donkey owned the space (I am arguably biased), creating a candy-coated nightmare of tragic characters and clever slogans, painting directly on walls, incorporating TV’s, plastic fauna, nooses and other props. Ming’s “Ballad of Franco the Kid” is overtly narrative—to that degree, he uses arrows and text to guide the viewer through Franco’s media-saturated wasteland of over-consumption, where the Mad Diners puppeteer the Workers Without Hands, who slave in uniform dissatisfaction towards their ultimate goal—the middle-class dream of Niagara. Not sure if gallery-goers got all that, but they sure had fun taking pictures with the Worker Men. And even if they got none of that, the music was worth braving the parking lot of the 101. 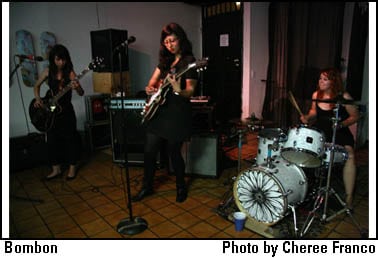 Ming Donkey (who used to be Jay Grumpy and in Southern California, is more apt to answer to Grump-Truck than Jayson) has extolled the virtues of the Pedro punk scene for as long as I’ve known him. I was arguably too young (or more likely, too square) for Recess Record’s mid ‘90s heyday, but the scene birthed by Mike Watts and nurtured by Todd C. (“Papa Todd,” Ming hoots) still lives and rocks—and not only in recounted tales of Fourth Street and Sunken City. A new band of old names, That’s Incredible opened the show with punk infused power pop—a little cheese and a lot of heart, these guys are danceable good times. Sean Cole (FYP and Toys that Kill) is the debatable frontman on guitar and vocals, with the pursed-lip, altogether intriguing and possibly bored Susy Sharp on bass. Matt Army played a Peavey T-60 (a guitar that hails from Mississippi and was flaunted by Hee Haw’s Jerry Reed)—prompting Ming to recall how, the first time the Grumpies played Pedro, Tonan-the-Librarian told him, “we’re hillbillies too, we’re the Southerners of California”—with Kid Kevin (Lipstick Pickups, Killer Dreamer) holding it down on drums and grinning the whole time. I found this amazing. Isn’t it a law that all drummers make ridiculous, hideous faces?

Next up was Bombon, also from San Pedro—a trio of ladies who rock a true SoCal fusion of surf-garage and Latina pride. Their name means “marshmallow” in Spanish, and their tunes have titles like “Pastel,” “Las Playas” and “Rancheritos”. Oh, and they’ll swear they suck, but don’t listen. They’ve been playing together for about eight months and they’re awesome. Alternately sleepy and rollicking, their songs are full of classic riffs, springy reverb and trembling pitch. There’s perfect build, lots of cymbals and a hint of psychedelica—but thus far the girls are staying true to their Pedro-punk roots, wrapping up most songs in under two minutes. Jerico kills the drums, Poloma approaches complicated bass parts with an endearing mix of trepidation and bravado, and Angela brings the sound home on a vintage Harmony Rocket, working the vibrato bar with scholarly authenticity. 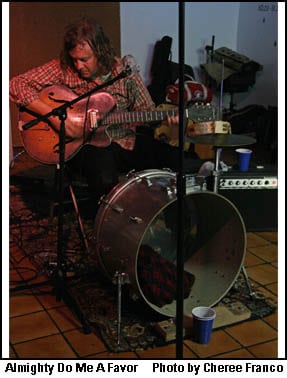 Then came Bradley Williams on guitar…and on drums…and tambourine and harmonica… and vocals. A founding member of Alabama’s Pine Hill Haints, Bradley set out, outlaw-style, for the wild-west, and Almighty Do Me a Favor was born as the dust settled. If that doesn’t tell you enough, here’s a cursory description: bluegrass picking, a grizzled voice and self-depreciating lyrics. Or as Ming Donkey puts it, Almighty sounds like “a conversation with your favorite neighbor”—meaning there’s something immediate and raw, even in its familiarity. One one man band to another, Ming Donkey finished the night, taking us on a haunted train ride to the closest lo-fi watering hole, tremolo in tow. Wailing into a harmonica mic, he chased wrenched-from-a-transistor-radio guitar with moonshine-marinated vocals.

And then it was done, but as a famous Mississippi drinking man once said, “The past is never dead. It’s not even past.” Till next time, L.A. 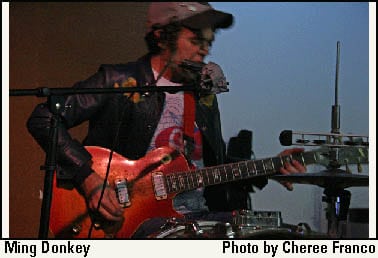