My name is Alex. Hiya.

At the end of my senior year of high school, I was forced to pay a five dollar fine for a copy of Tom Sawyer that I never returned to the library. I remember loaning out the book for eleventh grade English class but not feeling like walking out of my way to the library, so I rubber-banded a note on the back of the book.

(I definitely just invented a verb there - "rubber-banded" - and in my experience I found that every noun can be turned into a verb quite easily. For example: if I ever see anyone get hit by a fire-hose, which I actually DO see on a more-than-regular basis, I say, "YOU GOT WATERED.")

BUT I MEAN IT - I had to pay this goddamn five dollar fine for a book that I never even got around to reading. The way I saw it, I left the returning of the book to the goodwill of my fellow high school students, who probably picked the thing up and threw it out the window. Four years later and I still haven't cracked any of Samuel L. Clemens' famous volumes! (Mark Twain was a pen name; his real name was Samuel Clemens. No, seriously, look it up - hey, listen, man, who's the English major, you or me?) Go figure.

To make up for the five dollar fine, and to get in some last minute senior pranks since we never actually put that goat on the roof, I spent my last few days in high school stealing all of the books I could get my hands on. Kerouac, old pulp stories, Dostoevsky, Graham Greene, the entire Steinbeck library... anything good.

And really, there's nothing like reading a stolen book. It makes the print stand out nice and bright. The stories are invigorating in such a way that no purchased book can match. It's the same with free food. For some weird reason, it just tastes better! There's got to be a scientific reason for this. It's like some part of our brain or taste buds get excited because you didn't spend any money on something.

And then there's the fact that some of these things seriously hadn't been checked out since the '70s. I live my life by a rule that I take seriously:

The last day of school, the librarians had masking-taped all of the books to the shelf indicating that they had been counted and inventoried, and obviously nothing could have been checked out since it was the last day of school. Which didn't make a difference since nobody ever checked anything out ANYWAY, like I said already.

And I was still taking 'em! I had like three books in my hands, which immediately aroused suspicion from the librarians. They're thinking: 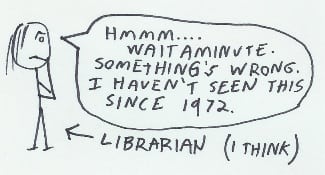 Right?! So I'm just standing there, gripping these three real thick books in one hand, looking around like the sketchiest of sketchy characters that ever frequented a punk house. Like one of those guys that are crazy train-hopping crusties and have names like "Steve Lice" and carry a guinea pig in their messenger bag, along with all of the records that they're stealing from your room.

The head librarian comes up to me and says, "Alex, what are you doing with those?"

The best thing I could come up with was something weird and lame like, "Can I check these out?"

She just laughed and said no, which was good for me because never in a million years would she suspect a high school student stealing BOOKS, of all things. Sure, they would take the little balls out of computer mouses (mice?) but high school kids would NEVER steal books. What would they do with them? It's not like they read. She took the booty and put it back on the shelf.

When she wasn't looking, I grabbed one last book that I really wanted and walked out of the side door that didn't have alarms. At the end of the day, the final bell rang and I was out of high school forever. All of the songs I ever wrote about hating that place were suddenly rendered moot. This was a problem. How could I sing about the tyrannies of the New York Regents system when I wasn't even part of it anymore?