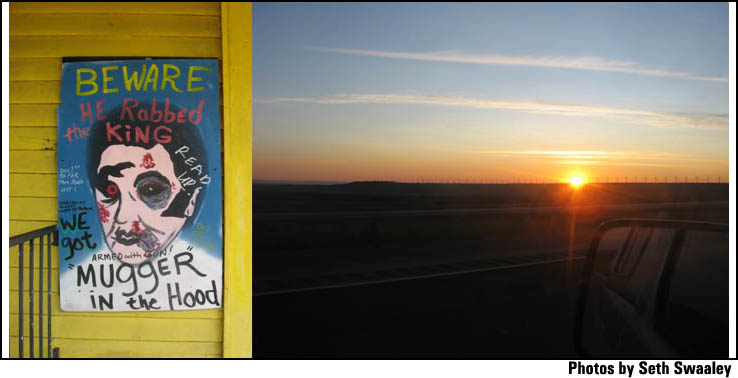 High, Low, and In Between: Chapter 9: I-70 and the Simplicity of Solitude

East through the frontier, past Cheyenne, true cowboy and cowgirl land, where the biggest rodeo in the world was taking place. The streets were packed with tight wranglers and Stetsons and waddling couples. I took a pit stop, enough to snap a few pictures, and then headed South through Denver and on East towards the Kansas border.

Kansas seems to be long stretches of nothing: flat land that carries all the way into the horizon and somewhere beyond. Grain and corn crops and every twenty miles a tiny town with a silo, a factory, an old rusted freight car that just called it quits one day, a few homes, maybe a gas station, and a café. A half hour later, you see the same exact town and the mind has been drifting some and you’re thinking, wait a minute, am I in some strange repeating vortex of Midwest farmland? Is this some sick joke where the miles on the odometer are moving but I’m just rolling down an endless road of eternal repetition? Or, maybe this is a Twilight Zone episode, yeah, that’s it, the last man on earth or the psychic in the coffee shop. The image of Rod standing in the corner with his slick hair and sick, yet enamoring, smile. A huge John Deere kicks up dirt on the road next to the interstate as the owner’s brown lab runs alongside, tongue hanging out, with the blood red orange sunset behind him. A pink Cadillac that has no reason being on a grassy knoll has a sign next to it that reads: “WELCOME TO FLAGLER.”

Time goes slowly with the wheels on the road. I make up songs that I forget an hour later. I talk to the cows but they seem to be occupied in their own form of reverie. Kansas City: 400 miles… 320. I pass the birthplaces of Bob Dole and Walter Chrysler. I see a sign for the world’s biggest prairie dog at some sort of freak animal farm. I laugh to myself and say, “I’ll show you the biggest prairie dog.” It’s then that I miss touring with friends and bands and the stories and joking in places like this to pass the time and how different that type of traveling is compared to this. The truck sputters a little and I take that as laughter, not wanting to think of the alternative. Soon, with the sunset upon me, I’m in another city, with the hope that some fantastic surprise lies around the corner.

Thirty minutes later, I take a wrong turn off the freeway and find myself in an area known as the Bottoms. It’s an old industrial warehouse neighborhood that lies below the hilltop that Kansas City sits upon. It has an apocalyptic feel to it and reminds me a bit of a run-down Hollywood movie set. The streets are empty for the most part, but I notice a few lofts and spaces where I imagine the artists and punks and adventurous entrepreneurs have set up in. I think back to when this place was bustling with commerce and workers and trains rolling through and ponder about the existence of time and the stories it tells.

More importantly, my first thing on the list was to eat some BBQ and what better place than Kansas City? Thus a lengthy scavenger hunt ensued, all in the search for a place called Arthur Bryant’s. I suddenly felt like I was in the South, as I was sent all over the city. You know, “Make a left when you see the tree,” type of directions. I stopped in an arts district and asked a couple if they knew where the place was.

This went on for a good ten minutes as he dialed all of his friends. Everyone knew the place but couldn’t member the street it was on. I thanked them for the effort and told them I’d find it somehow.

Another lady told me it was just “up the road a bit.” I ended up in the old jazz area where the negro baseball hall of fame is. I threw an imaginary pitch in salute of Satchel Paige. I walked all around, found myself in some projects a few blocks back, but there was no BBQ to be found. Then I asked this older gentleman who was out in the summer heat, sweating good and wet in his purple basketball jersey, purple shorts, purple shoes and purple hat.

“Oh yeah, just one block up that way. On Brooklyn St. Just right there.”

I didn’t see anything but apartments where he was pointing. When I got to the light, the street sign said Woodlawn St. Later on, a local told me everyone in Kansas City is partially deaf.

An hour and a half later, I found the place five blocks away. There was a long line out the door, and too hungry to wait, I drove on to another place called Gates. It was one of those small cafeteria-style joints in a non-descript mall. Grab a tray, order some meat, and devour. I looked a bit like a deer in the headlights, not quite sure what to order, but, thankfully, the girl behind the counter was quite nice and pointed me in the right direction. She then shouted at the top of her lungs back to the cook, “BEEF ON A BUN!” Minutes later, I sat alone at a booth. All of the sudden, those thousands of miles of witnessing endless plains of cattle came to fruition as I stared at the brisket covered in sauce. I received a dirty look and comment from a local for using a fork, so, not one to offend when it comes to local customs, I dug my hands in, the sauce and meat seeping underneath my dirty fingernails. I gave him a nod and licked my fingers clean. I won’t say it was the best BBQ I’ve ever had, but it was quite good, and, overall, I walked out of the place more than satisfied.

After a long walk around downtown, I thought that Kansas City seemed to have a close resemblance to Baltimore. The old gothic architecture of the business district and then the newly built-up commercial section where all the weekend crowds hung out. Just blocks away were desolate, abandoned, boarded-up apartments and stores that gave it the feel of a ghost town.

Trying to keep up with the western theme of the trip, I later that night found myself at the Stagecoach Inn, a small dive bar with a vast selection of stomach-turning beers—Schlitz, Old Style, Milwaukee’s Best, that sort of thing. Soon after, free shots of some vodka concoction kept coming my way from the bartender. I had a lengthy discussion with a guy working on a crossword who said he’d been a bartender at some of the strip joints years ago in New Orleans. He told me some punk rock stories and something about G.G. Allin running around the French Quarter covered in blood. But his memory wasn’t so good. He told me it was because he did a shit load of LSD.

I went back to my truck parked in a church parking lot only to be woken by the local police around four in the morning. Squinty-eyed, I looked into the shadowed face of the officer and his massive Maglite.

“What you doing here?” asked the officer.

“You can’t sleep here. You know, there’s motels and hotels around here.”

“Uh, does it look like I can afford a hotel?”

“Is there anything in there I should know about?” the light now shining bright through the inside of the car.

“You been drinking tonight?”

After driving around town earlier, it was definitely lot safer than some of the other parts I’d been through.

“You can park on the street, but not in this parking lot. It’s private property.”

I always thought churches were open to the homeless, but maybe not in Kansas City. I was too tired and drunk and know the rule of thumb is don’t argue with the police, especially when you’ve got out-of-state plates. I pulled the truck in reverse, over the curb, out the driveway, and straight into the first spot on the street. I covered the windows with my sun shade and the police car was still there. Soon after, I was fast asleep.