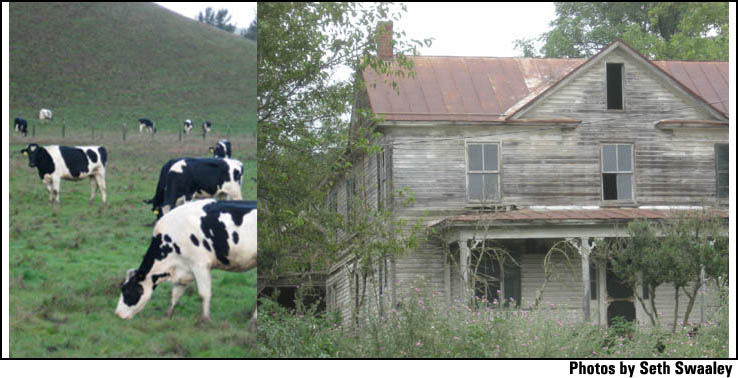 High, Low, and In Between: Chapter 8: Looking for Lily

My arm is out the window, wind in my hair, reality and dreams roaming across the landscape. Back and forth to places I’ve been, to places I’m going. There’s excitement, and yet there’s also a strange sense of peace driving towards the unknown. These wheels take me through the forgotten parts of this country: Oregon, Idaho, Wyoming; green planes interspersed with rolling hills and cows… cows… cows; everywhere you look. Just mulling about. Munching on grass. Heads bowed down in black and white uniformity. The deer join them close by, setting quite a picturesque scene of the Wild West. This is the land of abandoned freight cars and barren houses that look like they were vacated one day never to be returned to. Yet, somehow, after the test of time, through the harsh winters and whatever storms good ol’ Mother Nature has had in store, they’re still standing. They’re a little slumped to the side, the wood now decayed to form a dark gray, but still desperately holding on to whatever’s left of the past.

I made it as far as Rawlins, a hundred miles west of Laramie, Wyoming that night and slept in the parking lot of a Taco Bell. The only places open downtown after nine were the tent revivals; otherwise the place was a ghost town. It was another rough night as far as sleep went. I also came to the conclusion that at some point I was bitten by a spider, the gargantuan bump on the left side of my nose the next day being my marker.

The following morning I arrived in Laramie, sky early blue and the sun just rising. It was like a vision of a dream I’d had, except it wasn’t really a vision or a dream, more of a strange reality coming true.

Months earlier, I was sitting in my house and I don’t know how or why—I think the Clint Eastwood film Outlaw Josey Wales may have been on while I was sleeping?—does this take place in Laramie, Wyoming? I don’t know. I know nothing about Wyoming, but I woke up and wrote down the lyrics that night to a song I called My Days at the Prairie Café. In truth, it stemmed from an image I’ve had for a long time: a diner waitress living in the Midwest, maybe late forties, during the lull of mid-afternoon. The place is empty, aside from maybe an old regular sipping coffee at the counter. The waitress is staring stoically out the window and I’m wondering what’s going on through her mind. I wrote a song about her and a young homeless guy living in his car who visits town. I named her Lily; no particular reason other than that it seemed like a good waitress name. Usually you write the song from past experience, but in this case I was turning the tables; writing the fiction and then visiting the reality, figuring there’s nothing better than a little twist on the order of things.

Suffice to say, it was surreal as I rolled into the early morning streets of Laramie’s old downtown. The sun was just rising. The Union Pacific was roaring down the tracks of the Wild West, just as it had done for the past hundred and fifty years, and down at the end of 2nd St. laid the Prairie Rose Café. It was a name I’d stolen from some research I’d done. It looked just as I’d pictured it: a non-descript diner with a few booths and counter seats. The smell of greasy bacon and home fries filled the air. I went in and ordered a lumberjack breakfast. If an old waitress named Lily serves me, I’ll just have to say screw New York and stay here, I thought. I mean, the powers-that-be can only tell you things so many times in mysterious ways before you have to stop and listen to what they have to say.

But Lily was nowhere to be found. There was just a young blond college student named Emily taking my order. As I devoured the bacon and eggs and biscuit, I realized what a close resemblance that name had rolling off the tongue: Em-ily… Li-ly. Maybe I should consult an etymologist? But there was nothing startling that morning. There was a list of other waitresses who worked there on a board, but no Lily. Farmers in the back talked about the weather. A beer-bellied old guy with a John Deere cap asked me about my breakfast. I wanted to share my travel story with him, how I was off to New York with everything packed into my truck. I’d written a song about this place and now, crazy as it sounds, here I was, sitting in this stool, right at the counter, drinking stale coffee next to him.

“You see, sir, I’m living out the life of the characters.”

But I didn’t say anything. This was an early morning, much like any early morning in Laramie and in the world, for that matter. People woke, took a piss, shaved, put on makeup, ate some breakfast, went to work, walked to school, came home, flipped on the television, made love, slept, dreamt, and then did it all over again. Who the hell cared where I was going?

Despite my silence, my spirits were up. With belly full, I walked around town some more. I considered going into the Buckhorn Bar, but figured eight a.m. was a little early for drinking. I grabbed my guitar and sat next to the railroad tracks and played some tunes. I thought about all the greats before me who had done the same and the train-traveling songs of Woody Guthrie and Jimmy Rodgers came to mind, so that’s what I played. Some people looked at me oddly; others smiled and wished me a good morning. Later on, I went to a music store and jammed with a metal dude. He said there weren’t any metal bands in town, just country and bluegrass. He had no one to play with, so we sat down and he played and I tried to accompany him with my acoustic. Honestly, it just sounded like a lot of noise, but it was fun. I thought about sticking around Laramie, but once I got back to the truck I decided to head on.