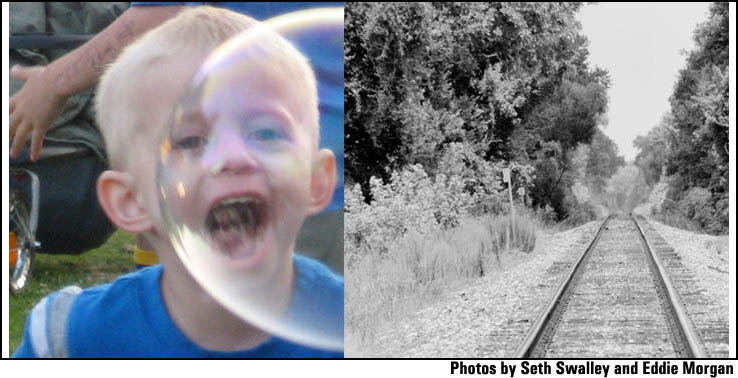 Portland is a relatively quiet place, despite what anyone there would tell you. It’s a small city, not necessarily in size, but culturally and geographically. There’s an active music scene, but, for whatever reason, I felt myself disconnected from it. I tried to go to punk shows but I never could get into any of the bands. Maybe I just didn’t know the right ones, but it seemed like a lot of the bands I came across covered up their lack of originality with loud music. Over time, my visions of living the life of Thoreau dissipated and my restless spirit seemed to resurface. I suppose you can only hide the true self for so long. The place just seemed too damn safe for my blood. And here I had the nicest house I’d ever lived in, a decent paycheck coming in, and I still wasn’t happy. I may have been an entry-level working bum before, but at least I was around good people. I was playing music. I was writing. I was creating and was surrounded by people doing the same.

Portland lacked the danger and action and creativeness and spontaneity that I was used to in big urban cities like D.C. and Baltimore and New Orleans. The personalities were different. Whereas in those other places, I felt like I got a good idea of what someone felt instantly, whether it was good or bad. In Portland I always felt like folks weren’t really being honest with me. I think it’s just the way people were. They have a more reserved nature about them. Maybe it was just my own sense of social awkwardness, but I found myself becoming more and more of a recluse. Sometimes I was hit by long waves of depression, spending more time alone with the walls.  But all through this time, the guitar was at my side; my salvation of sorts. I’d go over monotonous finger picking patterns, thumping my thumb hours on end. I’d play until blisters and calluses wore away into dead skin and I found myself waking up in a chair in the early morning hours with the guitar still in my hands.

I still didn’t think I was any good at playing compared to what I was listening to, but I saw minor improvements. I was able to pick out songs a little easier and, gradually, I began to learn a handful of old traditional folk and blues tunes. I was also writing my own songs—using past stories as the basis for most of them—trying to work together a theme of sorts with various characters. I wrote a song about Carson McCullers The Heart Is a Lonely Hunter, then another about a street musician from New Orleans. I wrote one about a bum wearing a toga roaming around New York during the spring who’s convinced he was once a Wall St. millionaire. One from the point of view of Travis, the character played by Harry Dean Stanton in the movie Paris, Texas. Another about a married woman who leaves Alaska dressed as a pinup girl, driving a Mercury Comet. She meets an eighteen-year-old Indian in Sioux Falls: an affair ensues across the landscape. I even wrote some instrumentals. It was nice to feel like I was creating something, nothing new per se, but a little piece of life. I found myself with a productive fever, trying to catch up for the previous years I felt like I had wasted.

Eventually, I put together a demo CD and started playing shows. My first one was at a metal/punk bar in a desolate part of 82nd St.in NE Portland. There was nothing much out there at night aside from some cheap motels and a few roaming hookers and meth addicts. I went on after a really bad cover band. There were maybe ten people there and as I sat on the stage, I couldn’t help but miss the days of being in a punk band. Even as the lead singer, I wasn’t the complete center of attention. I had other friends along with me to throw in the funny jokes or liven up the crowd who, more often than not, were also good friends. Blast the guitars and bang out the fast beat. Who cares if the PA works?  Next thing you know, everyone’s jumping around and beer is spilling and we’re having a good’ ol’ time. This was a whole new world of performing for me. As I finished each song, I was greeted with blank stares and a few kind souls who clapped. It felt a little strange.

A month later, I got a gig playing Fridays at a Polish café. The owner had the right intentions: Polish food, music, cheap foreign beers, but hardly anyone ever came to the place. The first time I played there, my crowd consisted of a good friend of mine and two little kids and their parents. With chocolate ice cream covering their faces, I played Elizabeth Cotton’s song “Freight Train” for them. When I was done, the kids were yelling, “Freight Train! Freight Train!” I concluded that maybe next time I would wear a conductor’s hat and bring little toy trains for them to play with. I came away from that show with a mere five bucks and a few pierogies, but it was then that I had the feeling I was on to something here. I liked playing for kids. They seemed to innately feel the emotion of the music, more so than adults, and though what I was playing was entirely different, it reminded me of that same feeling of old basement punk shows I’d been at and played in years before.