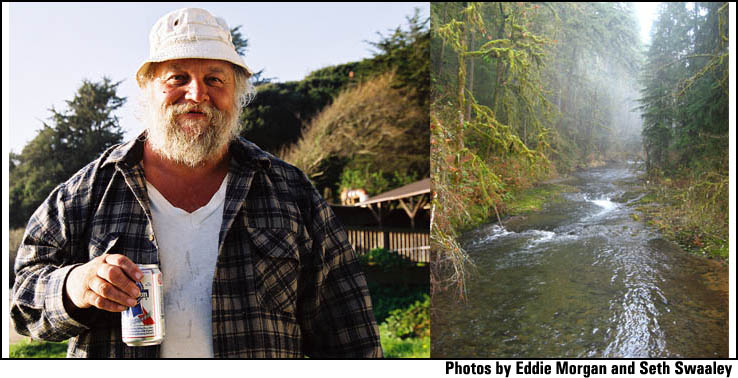 High, Low, and In Between: Chapter 5: Talking Fishing Blues

In every way possible, Portland seems to be the complete and utter opposite of Los Angeles. No concrete jungle or graffiti or unending suburban sprawl. No yelling motorists sitting in rush hour traffic. No bright lights. No glam. A thirty-minute drive and I could be hiking in the mountains of the Columbia Gorge, standing underneath gorgeous waterfalls and cliffs that had been carved for thousands of years. I could be fishing with a roaring river from the runoff of Mt.Hood all to myself, the hawks circling above, deer and bear somewhere close by. I’d never really spent much time in nature and I certainly wasn’t any survivalist by any means, but I found it all new and exciting. Soon, I would have a cabin and a pond and do my own hunting and refuse to pay taxes and continue in the tradition of great nature writers.

My first job I got sent out to a “tank farm” where they store gasoline and ethanol. It was a highly dangerous environment in an industrial area on the outskirts of northwest Portland, where, at times, one small spark could cause the whole place to explode. Hours of paper work were necessary for even the most menial tasks. It definitely wasn’t a job for the nervous at hand. It was mostly outdoors, rugged and dirty, and dealt more with control wiring and valves and processing machines. It was a completely different world from the typical commercial work that I knew.

There was a lot of down time, sitting around, waiting for various jobs and okays by managers. After a month there, I felt like I had very little in common with the guys I worked with. These were folks whose vacations consisted of driving out to Idaho to hunt for elk. They all knew how to fix their cars and build their houses. They were accustomed to the harsher elements of nature, and, for the most part, it seemed like they married the girl from their high school, got a job with the union when they were young, had kids, and never left the town they were born in.

As we sat around on breaks in the maintenance room, the conversation more often than not centered on guns, which, unfortunately or fortunately, depending on how you look at it, I know nothing about. Often I stayed quiet, occasionally feeling the brunt of derogatory comments about the “California Boy,” and maybe the fact that I was gay because I wasn’t married and didn’t have any kids yet.

“When you going to get a gun? You know, there’s a gun show coming up next week. Hell, my son’s twelve. He’s even got a gun. He’s even killed his own elk. What are you, gay? Who the hell doesn’t have a gun?”

They were kind of kidding and kind of not. Aside from an extremely intelligent journeymen my age who I actually quite enjoyed working with, these were folks who thought Obama was going to steal their weapons from them. These were tough, small town men who had stored up their ammunition in the days leading up to Y2K and it really bothered them that I didn’t have something to defend myself with.

“It’s your God-given American right, for Christ’s sake. Haven’t you ever read the Constitution? You lived in L.A. and New Orleans and didn’t have a gun? Are you fuckin’ crazy?”

When I told them all the places I’d lived in the past ten years and all of the various jobs I’d worked, I was granted with mystified looks and shaking of heads, as if I was some foreign creature. And how the hell could I be away from my family? What the hell kind of son was I?

One day, I brought up fishing, although I really don’t know much about that either. I would just go up to the ClackamasRiver, out to some desolate area off the road, and throw my line in. I’d drink a six pack, strum my guitar, and never get a bite. I was quite complacent sitting on my beach chair with the quiet and solitude. I’d come to the realization that if you went to the river and sat on a rock, you were deemed crazy, but if you had a pole in your hand, well, then you were all right.

“What did you fish for?” asked Frank, a very good electrician who was always high-strung and most likely bipolar. One minute, he’d be smiling and laughing with you, the next he’d be screaming bloody murder how you were an idiot:

“You ain’t in no damn California no more and how long you been an apprentice? You don’t know how to do that? Boy, you and me goona’ be buttin’ heads. What the hell are they teaching you at that school?”

“Trout,” I lied. It was pathetic. I didn’t even know what I was fishing for.

Frank was all smiles. There were a few nods from the other electricians. I was then considered okay, if nothing, for a brief few minutes, and given privy to the good fishing holes outside of Portland. I’d hate to have seen what the ramifications would have been had I said yellow.